Home » Africa » After Eruption, Residents in Congo Struggle to Find Food and Shelter

GOMA, Democratic Republic of Congo — The volcano is quieter now.

Smoke and ash billow from the cone of Mount Nyiragongo, one of the world’s most active volcanoes, instead of the molten lava that streamed from its flanks on May 22, killing dozens of people and destroying 5,000 homes in nearby Goma.

The tremors and aftershocks that terrorized the city, collapsing buildings and triggering a mass evacuation, have largely stopped too. Scientists who dare to once again approach the steaming volcano say the danger appears to have passed — for now.

“I’m not ruling out the possibility of another eruption,” Dario Tedesco, a volcanologist who has studied Congo’s volcanoes since 1995, told journalists on a visit to the crater of an adjacent, smaller volcano, on Sunday. “But statistically there is very little chance this will happen.”

The Congolese government, though, says the area is still on “red alert” and has warned residents to remain vigilant. And for many residents of Goma, homeless and haunted by hunger, the crisis is only getting worse. 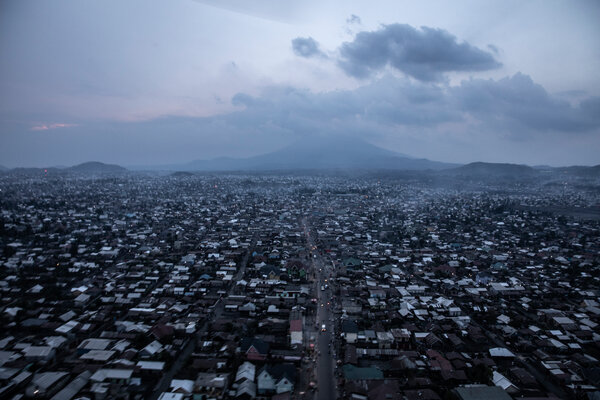 Aid groups say that several hundred thousand people were displaced by the unexpected eruption of Mount Nyiragongo, the first in two decades, and another half million have been without access to clean water since lava poured into the city’s main reservoir.

The homeless sleep in churches, schools, or the homes of local good Samaritans, while others bed down outside. Many residents say they have hardly eaten in the past 11 days. Aid groups warn of a possible cholera outbreak.

“We brought with us what we could to eat,” Charmante Kivara Siviwha, 23, said in an interview at the classroom where she has been sleeping on a concrete floor with her 4-month-old daughter. “But it’s not enough for all the children.”

Ms. Siviwha shares her cramped shelter in Sake, 12 miles northwest of Goma, with 40 other people. But she does not want to go home because she fears another eruption, and because she has heard the government’s ominous warnings of possible mass poisoning.

Scientists warn that a second eruption of Mount Nyiragongo could also set off a “limnic eruption” — a rare phenomenon that, in the case of Goma, would see a giant cloud of noxious gas rise from the depths of nearby Lake Kivu, engulfing the city and suffocating many of its inhabitants.

Also, noxious fumes have wafted in recent days from the depths of Nyamulagira, the nearby smaller volcano that last erupted in 2011, stoking fears that it, too, could blow.

“I’m mostly afraid of the gas,” Ms. Siviwha said. “But the earthquakes are also very scary.”

With thousands of U.N. and humanitarian staff evacuated from Goma, many over the border into Rwanda, those displaced by the eruption have had to mostly fend for themselves. Aid groups have appealed for supplies of emergency relief aid.

Up to a million residents fled Goma following the May 22 eruption. But in recent days, some residents have started to return home, and a semblance of normality has returned to some parts of the lakeside city, which sits at the center of a vast region that is rich in mineral wealth but plagued by seemingly endless conflicts.

The thump of music pulsates again from the city’s nightclubs, and some of its raucous bars have reopened. The mining of coltan, a valuable mineral used to make mobile phones and other electronics, and which is found in abundance in the surrounding countryside, has resumed.

The drumbeat of violence has also resumed. At least 55 people were killed in attacks on two villages about 200 miles north of Goma on Sunday, the United Nations said. It was the deadliest single day of violence in the region in at least four years.

Some local officials blamed the attack on the Allied Democratic Forces, an Islamist rebel group with ties to Islamic State. But officials at the Kivu Security Tracker, which has mapped violence in eastern Congo since June 2017, said the attacks could also have been caused by ethnic tensions.

In a statement on Tuesday, a local community group blamed the violence on armed members of the Banyabwisha ethnic group.

The confusion was a measures of the vastness of the area, the profusion of armed groups operating there, and the challenge facing the U.N. peacekeeping mission in eastern Congo, which has a major base in Goma.

After the last eruption of Nyiragongo in 2002, which killed 200 people and left over 100,000 homeless, it took years to rebuild damaged homes, roads and infrastructure in Goma.

This time, the eruption also separated nearly 1,400 children from their families, according to the U.N. children’s agency. At least 900 have been reunited with their parents, though, including 5-year-old Chiza Matondo.

For days after the eruption, Chiza’s brothers wandered through neighborhoods calling his name through a bullhorn. His parents searched centers where lost children were being registered and sheltered, growing more distressed with every passing day.

Finally, after six days, the Red Cross reunited Chiza with his family.

“I just wanted to laugh and put him on my back,” said his aunt, Nyota Matondo. “We’re so happy now.” The boys’ father was absent, she added, because he had gone to buy an animal to slaughter in celebration.

“A chicken, or maybe even a goat,” she said.

Why Burundi has renamed its airport and other landmarks