PARIS — For a third successive week, tens of thousands of people took to the streets of the capital and cities across Algeria on Friday to protest a fifth term for the country’s gravely ill president, Abdelaziz Bouteflika, as new cracks opened in the longstanding authoritarian regime.

Many of the protesters on Friday started marching even before the end of weekly prayers, a new development in what has become a wildfire popular revolt organized largely through social media.

The streets of Algiers were so packed with demonstrators that movement inside the crowds was impossible, observers reported. At one point crowds forced through barriers blocking access to the presidential palace, the Mouradia.

The demonstrations were largely nonviolent although there were some clashes between demonstrators and the police, who used tear gas. The police detained 195 people, Algerian state television reported.

“This is a revolutionary situation,” said Lahouari Addi, an Algeria specialist who is emeritus professor at the Institute of Political Studies in Lyon. “The protests are huge. It’s the whole population that wants to see them go.”

As important, ruling party members, top business leaders and even the mouthpiece of the country’s powerful armed force began siding with the demonstrators.

On Friday seven prominent members of the ruling National Liberation Front party — successor to the liberation movement that freed Algeria from French rule — resigned from the party to express support for the protesters, according to Algerian media.

Earlier in the week, the powerful organization of former liberation-war combatants, the Moujahidin, saluted the “civilized behavior” of the anti-government demonstrators and denounced corruption “at the heart of the power hierarchy.” Several chief executives have resigned from the industry bosses’ league in support of the protest as well, though its head remains close to Mr. Bouteflika. 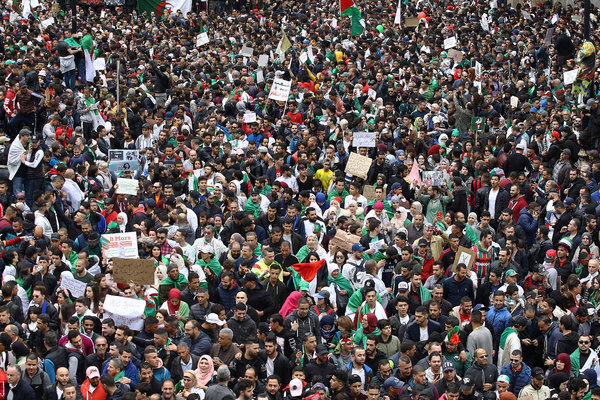 Perhaps most significant, El Djeich, the magazine of the country’s powerful army, published an editorial on Friday hinting at support for the mainly youthful protesters.

In the veiled language typically used by the country’s nomenklatura, the editorial spoke of the Algerian army’s “common destiny” with the people, the “unity of their shared vision of the future,” and hailed the country’s youth as “no less patriotic than the youth of yesterday.”

The army — in the person of its chief of staff, 79-year-old Mohamed Gaïd Salah — is at the heart of the clique that rules Algeria today. Analysts said the editorial in El Djeich had implications for the country’s future, and for the army’s current posture.

“It shows that they are at sea,” Mr. Addi said in a telephone interview from Lyon. “They are looking for a way out, and they are saying to the people, ‘We are with you.’ ”

Mr. Bouteflika has not publicly addressed the country in seven years. Barely able to talk because of his stroke, he is represented at government rallies by his framed portrait, known as “The Frame.” He is currently undergoing treatment in Switzerland, where on Friday the police arrested a popular opposition activist, Rachid Nekkaz, who was demonstrating at Mr. Bouteflika’s hospital.

The anti-government demonstrations began several weeks ago after the ruling party indicated that, despite the president’s evident infirmity, Mr. Bouteflika would again be a candidate for a fifth term of office.

That was enough for many Algerians who have until now abided awkwardly for years under the rule of an absentee president while those around him shared the spoils of power.

Within days, protesters took to the streets, some with placards reading, ‘‘Game Over.’’ The demonstrations — in themselves extraordinary under the authoritarian regime — have grown weekly since.

With no single figure in the opposition capable of uniting the protesters, Mr. Addi said it was impossible to predict how the situation would resolve itself, a view shared by other seasoned Algeria-watchers.

Last weekend, in an effort to hold off even bigger demonstrations, the government offered to set early elections should Mr. Bouteflika win a new term in April — an outcome Algerians consider a foregone conclusion — but that did not appease the street.

In the streets of Algiers on Friday, the protesters insisted on their determination to keep marching until their goal was achieved — Mr. Bouteflika’s bowing out of the election.

“This movement is giving me hope, hope that I had lost,” said Meriem, a 54-year-old university professor who, like others, declined to give her last name for fear of government reprisals. “And we hope that the protests will organize themselves. Sure, we’re always afraid of violence. But better to be afraid than to die a slow death. And in any case, I hope it is them who are afraid today.”

“I’m demonstrating today because they have made us hate our lives,” said Samia, a 30-year-old mother of two who lives in the suburbs of Algiers. Her children “have no place to play,” she said. “We’ve tried to free ourselves for years. And we’re still waiting.”

Mohamed Lamine, a 22-year-old student, said: “It’s the whole system I want to get rid of. I know very well that when I finish my studies, I have no future in this country.”

One of the country’s leading opposition figures, Mohcine Belabbas, predicted that the movement would continue. And he suggested that a larger goal had overtaken the original one of Mr. Bouteflika’s ouster.

“The people have a determination to fight it out with the system,” said Mr. Belabbas, head of the Rally for Culture and Democracy party, who joined the protesters in the streets of Algiers on Friday. “There can’t be any turning back.”

It’s not just about rejecting a fifth term for Bouteflika, he said.

“It’s a rejection of the whole system,” he said. “We are in a political moment like the one preceding the outbreak of the Algerian Revolution.”

Mali Says 54 Are Killed in Jihadist Attack on Army