Home » Africa » As Tanzania Votes, Many See Democracy Itself on the Ballot

NAIROBI, Kenya — With opposition figures harassed and arrested, news coverage severely restricted and social media mysteriously slowing down, many have come to two predictions about Tanzania’s election on Wednesday: The president will win. And the country will lose.

“This is the election where any resemblance Tanzania bears to democracy probably ends,” said Dan Paget, a politics professor at the University of Aberdeen in Britain who has written extensively about the Tanzanian president, John Magufuli.

The election is widely seen as a referendum on Mr. Magufuli, who is seeking a second five-year term, and on the governing Party of the Revolution, which has dominated Tanzanian politics under one name or another since independence in 1961.

Elected on an anti-corruption platform, Mr. Magufuli, popularly known as “the Bulldozer,” has been lauded for his efforts to strengthen the economy, cut wasteful public spending and revive infrastructure projects.

But his administration has also been accused of stepping up repression. The government has cracked down on political dissent, muzzled media and right groups and passed legislation reinforcing the party’s hold on power.

It’s unclear how the pandemic might affect the election. For one thing, Mr. Magufuli, will hear none of it. The 60-year-old president has declared Tanzania coronavirus free, claiming the power of prayer helped purge the virus from the East African nation. 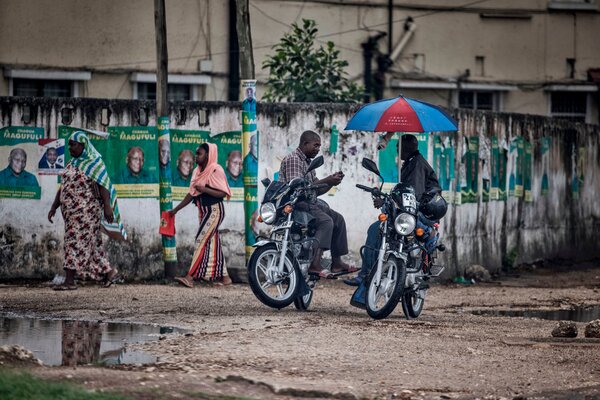 Virus or not, Tanzanians are expected to cast ballots in great numbers.

More than 29 million people are registered to vote at more than 80,000 polling stations in mainland Tanzania and in the semiautonomous Zanzibar archipelago. They will choose a president, lawmakers and local councilors. There are 15 presidential candidates, with Mr. Magufuli facing off against a veteran opposition leader, Tundu Lissu, and a former foreign minister, Bernard Membe.

When it is all over, few doubt that Mr. Magufuli will emerge the winner. The government has not, after all, made it easy for those seeking change.

Opposition groups say that the authorities have targeted them, leveling accusations that they organized unauthorized meetings and disqualifying dozens of their parliamentary candidates. The authorities have also thrown up obstacles to opposition figures who tried to campaign or obtain accreditation for poll watchers.

“We’ve had to fight for our polling agents to be sworn in because the law requires that they be sworn in before they can be admitted into polling stations,” said Mr. Lissu, the presidential candidate, who was shot 16 times in a 2017 assassination attempt. “That was a struggle.”

A government spokesman did not immediately respond to requests for comment.

On Tuesday, as early voting kicked off in Zanzibar, Seif Sharif Hamad, the presidential candidate on the island for the opposition Alliance for Change and Transparency party, was arrested. This came just hours after his party reported that police officers had killed 10 people and injured 50 others in Zanzibar after, it said, citizens saw the army delivering marked ballots.

The mood in Zanzibar remained tense, eyewitnesses said, with shops closed and the police engaging protesters in some neighborhoods.

“Police officers are throwing tear gas,” said Omary Mdogwa, a 32-year-old businessman. “This is to scare people not to be in groups or to plan any kind of physical confrontation during election.”

The government rejected reports of deaths and injuries in Zanzibar. The inspector general of the police, Simon Sirro, did say that 42 people had been arrested and accused of stoning police vehicles carrying ballots.

The top diplomats from the United Kingdom and the United States in Tanzania on Tuesday voiced their concerns about violence in Zanzibar and called for restraint. The United Nations secretary general, António Guterres, called on Tanzanian political leaders and their supporters to “refrain from violence,” and the head of the African Union, Moussa Faki Mahamat, urged the authorities to “ensure a conducive environment to enable citizens to cast their votes in a safe and peaceful manner.”

News organizations have also been silenced.

Rights groups say the authorities have used stringent legislation, prosecution and arbitrary shutdowns of media outlets to subdue independent coverage of the elections. Since January, they have suspended at least six media outlets for periods ranging from one week to eleven months, said Muthoki Mumo, the sub-Saharan Africa representative for the Committee to Protect Journalists.

Tanzanian journalists are “operating in an environment of deep fear amid regulatory aggression,” Ms. Mumo said. “It is difficult to imagine that the Tanzanian press, so systematically assaulted by the state, can cover the elections independently and safely.”

The government has amended its online content regulations to expand the range of prohibited content. And broadcasting regulations were changed to require Tanzanian broadcasters to seek authorization before using material produced by foreign media.

New rules also require that a government minder accompany foreign reporters on assignments — if they are allowed into the country at all. Many journalists from outside news organizations, including The New York Times, were not able to obtain accreditation to cover this week’s elections.

Major human rights groups, too, have been forbidden to observe the elections. This includes the Legal and Human Rights Center, which coordinates a coalition of nongovernmental organizations that have historically monitored the country’s polls, said Oryem Nyeko, Africa researcher at Human Rights Watch.

“A very key voice has been removed from conversations about the elections,” Mr. Nyeko said in a phone interview.

Mr. Magufuli’s supporters say his record speaks for itself.

His administration is overseeing plans to build a much-anticipated hydropower dam, open a modern railway and revive the country’s national airline. Mr. Magufuli has also helped lift Tanzania’s economy from low-income to lower-middle income status, according to the World Bank.

An orator with a flair for the dramatic, Mr. Magufuli has garnered support among ordinary voters for standing up to big corporations and for his surprise visits to villages and towns to help resolve complaints on the spot.

But even as he solidifies his grip, Mr. Magufuli faces a spirited opposition that has defied all odds to build a wide grass-roots campaign, Mr. Paget, the University of Aberdeen professor, said in an email. If that pays off with more seats in Parliament, he said, it will be “a lonely point of solace in what has otherwise been a five-year authoritarian winter.”

Many believe that should Mr. Magufuli be re-elected, the government may become even more regressive, enacting political and constitutional changes that could include the lifting of term limits and further restrictions on civil freedoms.

Mr. Lissu, the presidential candidate, has taken to describing this year’s vote as “without doubt the most important and the most consequential general election in our entire history.”

Why Nigeria’s ‘Avengers’ are crippling the oil sector