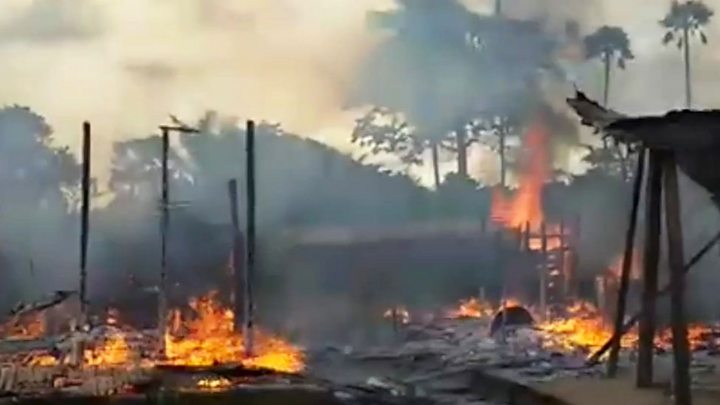 A man calmly sets fire to a house, watched by a group of at least 12 men dressed in fatigues, helmets, and black webbing consistent with those worn by an elite army unit in Cameroon.

“I want to die,” a village chief tells his tormentors as they beat and threaten to kill him. They appear to be members of a separatist militia.

Captured on video and shared widely on social media, these are among dozens of clips that have been pouring out of Cameroon over the last six months, some of which have been analysed by BBC Africa Eye.

Some of them show burning villages. Others record acts of torture and killing. Many are too graphic to show.

Though often confusing and hard to verify, these films show a nation sliding towards a brutal civil war as the government tries to suppress an armed insurgency in the English-speaking areas of western Cameroon.

The crisis in Anglophone Cameroon:

Footage recorded in late April this year shows a unit of at least 13 soldiers setting fire to a house in Azi, a village in Cameroon’s Anglophone South-West region.

BBC Africa Eye has confirmed the location by matching buildings to satellite imagery, and comparing the fire damage shown in a subsequent video from the same village.

These men appear to be members of the government’s security forces. Their fatigues, helmets and webbing are all consistent with those worn by Cameroon’s Rapid Intervention Battalion (BIR), an elite army unit that has been equipped and trained by the US and Israel.

A local resident also told the BBC that the troops who destroyed homes in Azi belonged to the BIR. But a government spokesperson says the men’s identity is unclear.

“They [the separatists] are able to acquire military uniforms of the Rapid Intervention Battalion or any other brigade of the defence forces in order to perpetrate their crime and blame our defence and security forces for it,” Cameroon’s Communication Minister Issa Tchiroma Bakary said.

He told the BBC the incident was being investigated to “shed light on what exactly happened”.

Burnt to the ground

Amateur footage captured another attack on 29 April, this time on Munyenge, also in South-West region, showing the centre of the village ablaze.

The BBC has spoken to three residents of Munyenge who all say that the village was destroyed by government forces.

One man said that troops burned many houses, killed civilians and decapitated a body.

Satellite imagery from before and after this attack shows the extent of the destruction.

Slide to see the destruction in the village of Munyenge 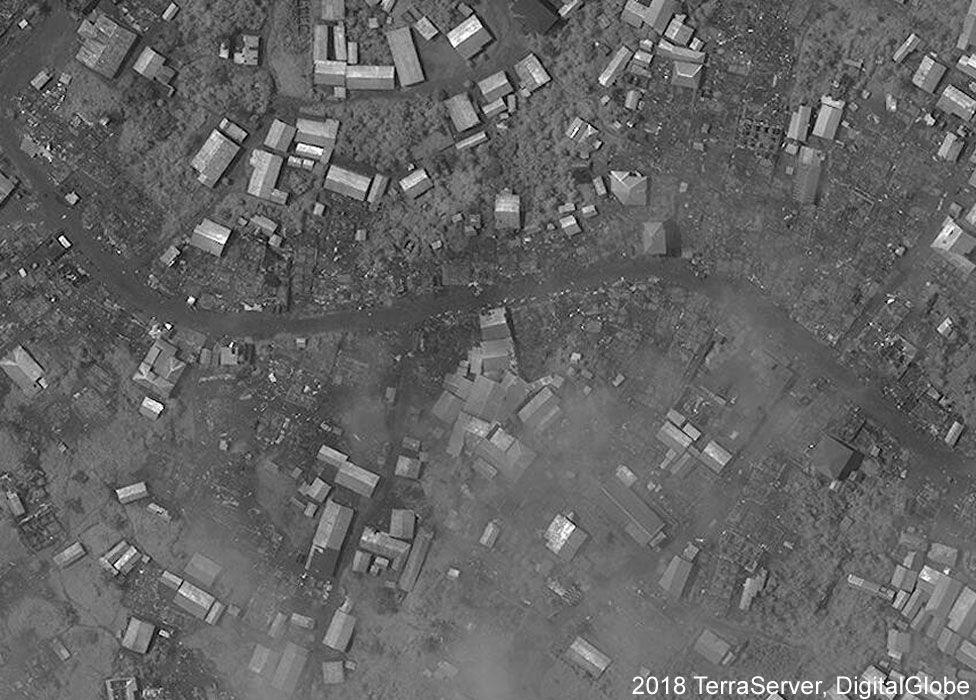 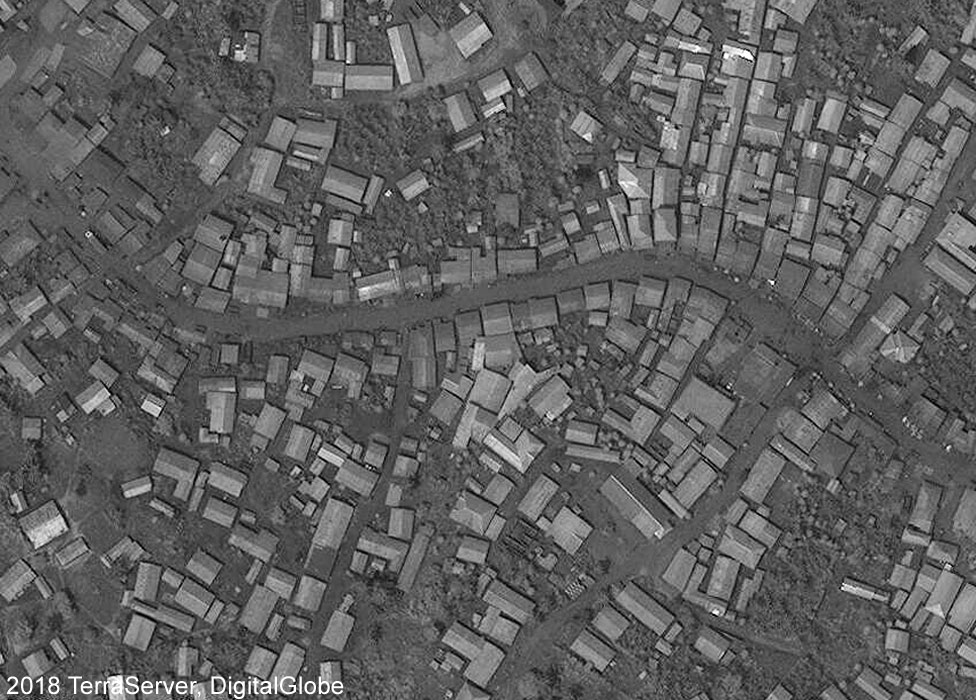 A few days later, in early May, a video posted to Facebook showed the nearby village of Kuke Mbomo after a raid allegedly by soldiers.

BBC Africa Eye examined the footage frame by frame and confirmed its location.

The video shows a man holding live ammunition and shouting to the camera: “These are for us, for civilians, to kill us!”

Anglophone activists say close to 70 villages in the South-West have been targeted over the past year – and that the violence is continuing.

Using satellite imagery, the BBC has identified at least four villages that have been extensively damaged by fire in recent months.

Slide to see the destruction in the village of Bekora 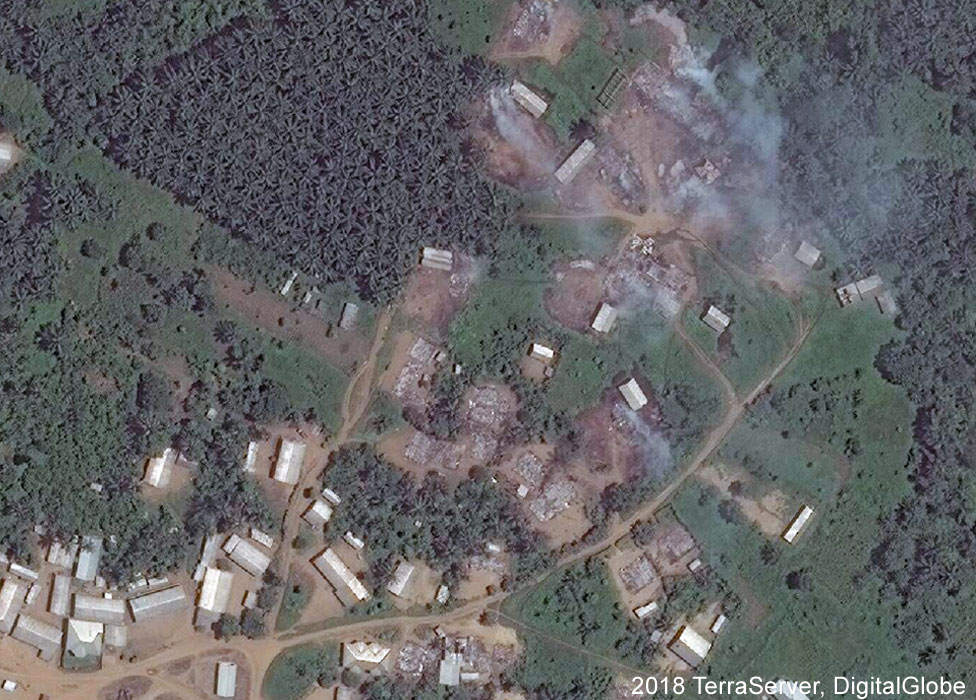 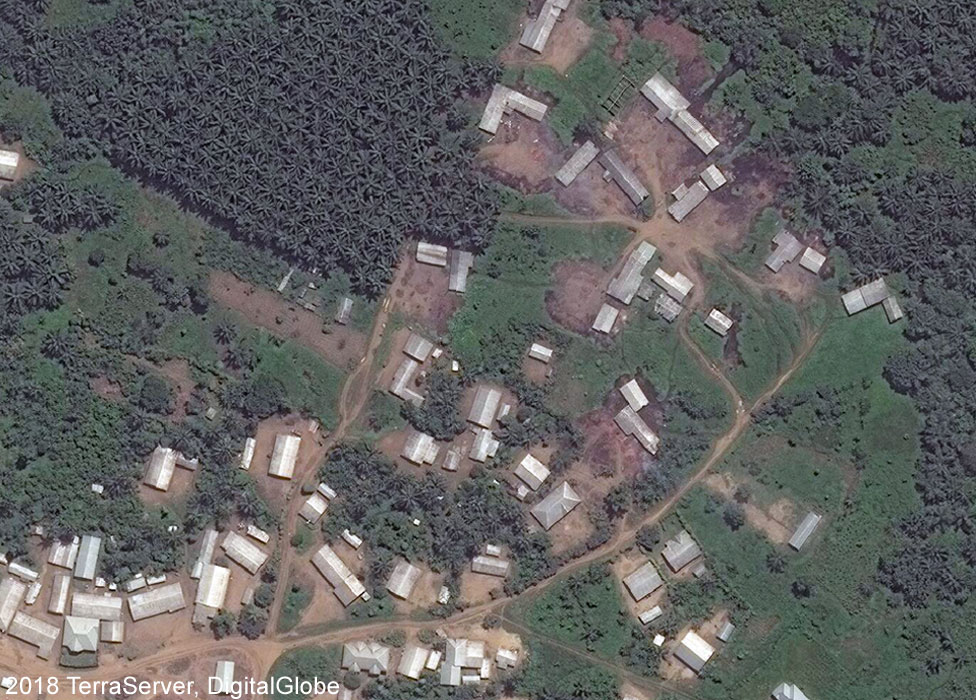 Although we cannot confirm who is responsible for torching these villages, lawyer and activist Agbor Nkongho blames government forces.

This is a conflict that has been building for decades.

The division between Cameroon’s French-speaking majority and its English-speaking minority has its roots in the colonial era.

Cameroon was colonised by Germany and then split into British and French areas after World War One.

After French-administered Cameroon gained independence in 1960, the two parts of the country formed a single nation the following year.

Even then, some English-speakers felt they had been forced into the new republic.

Cameroon became a federation of two states – one English-speaking, the other French-speaking – under one president.

A decade later in 1972, another public vote saw Cameroon dropping its federal form to become a unitary state.

Ever since, many Anglophones have complained that their regions were being neglected and excluded from power.

These simmering tensions bubbled over into violence in 2016.

It started as a protest by lawyers and teachers demanding better provision for the use of English.

But tensions rose, leading to confrontation between the security forces, a 93-day blackout of internet services across Anglophone Cameroon, and separatist militants fighting for the breakaway state of “Ambazonia”.

Since then, there have been reports of atrocities on all sides – kidnappings, extra-judicial killings and the burning of villages.

Amnesty International says that English-speaking Cameroon is now gripped in a “deadly cycle of violence”.

The rights group alleges the government crackdown and unrest has gradually turned into an armed conflict, leaving the general population at the whim of two opposing forces.

The government has taken some steps to address the issue of language, which sparked the crisis, setting up the National Commission for the Promotion of Bilingualism and Multiculturalism last year.

The communications minister also says incidents of alleged tortured are being investigated after a video, recorded in May 2018, appears to show military police officers abusing a separatist commander. BBC analysis places the footage outside the military police post in the village of Nkongle.

“If a soldier or soldiers were to be found guilty of such behaviour, I am telling you that they would be court-martialled immediately,” Mr Bakary said.

The rebels have also attacked and burnt down schools – according to Amnesty at least 42 schools were attacked by armed separatists between February 2017 and May 2018.

Anglophone activists called for a complete school boycott last year to exert further pressure on the authorities. Amnesty has images of a teacher who was shot for keeping his school open.

A new video shows a village chief being beaten, apparently by a rebel who threatens to kill him.

The government says that 81 members of the security forces and more than 100 civilians have been killed by separatists in the past year.

No official figures are available for civilian and separatists’ deaths at the hands of the security forces.

This week, the gendarmerie – Cameroon’s military police force – banned officers from using mobile phones or social networks such as WhatsApp, Facebook and Twitter without permission.

Aid agencies’ efforts to assist civilians have been frustrated by the struggle to access conflict areas.

As Cameroon’s Anglophone crisis continues, both the UK and France have discreetly pressed for dialogue.

The US Ambassador to Cameroon, Peter Barlerin, has taken a harder stance. He recently accused the army of burning and looting villages and also suggested that after 35 years in power, President Paul Biya might want to consider stepping down.

Cameroon faces increasing international scrutiny in its approach to the crisis, with general elections scheduled for October 2018.

Thousands of families have been forced from their homes by the fighting.

While 21,000 people have fled across the border into Nigeria, the UN estimates that a further 160,000 are displaced within Cameroon.

Many others are still hiding in the forest.

How race relations in the ‘rainbow nation’ have become toxic