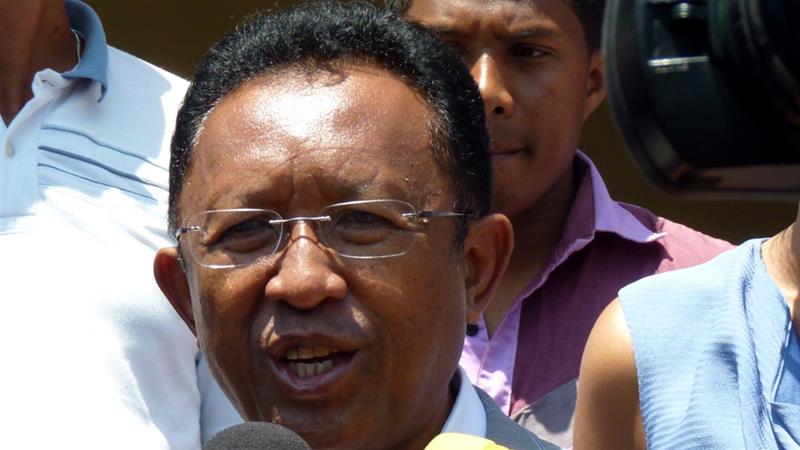 Former Madagascar president Hery Rajaonarimampianina has alleged “many voting irregularities” in this week’s election, raising fears of protests and a disputed result.

In a statement on Thursday, Rajaonarimampianina said a number of “anomalies” have been detected, including an “invalid electoral register, intimidation [and] the presence of pre-ticked ballots”.

“All indications are that the votes of the Madagascan people have been stolen,” Rajaonarimampianina, who held office from 2014 to September 2018, said.

“We will not let the people be robbed of their vote,” he added.

As of the latest count, Rajaonarimampianina had won about three percent of the vote based on results from nearly 300 of Madagascar’s 24,852 polling stations.

Election frontrunners and fellow former presidents Andry Rajoelina and Marc Ravalomanana, meanwhile, had about 45 percent and 40 percent of support respectively.

Provisional results are expected by November 20 which must then be confirmed by the High Constitutional Court by November 28.

If none of the three-dozen hopefuls wins more than 50 percent of the votes, a runoff between the two best performers will be held on December 19.

The new president will serve a five-year term beginning in January 2019.

Election officer, Ernest Razafindraibe, told Reuters news agency that turnout on Wednesday, a vote considered to be an acid test of the impoverished island’s democratic credentials, was about 45 percent. Nearly 10 million people were eligible to take part in the ballot.

Al Jazeera’s Fahmida Miller, reporting from capital Antananarivo, said Rajaonarimampianina had yet to substantiate his allegations regarding possible irregularities.

“He is warning people to be vigilant and cautious of the preliminary results and complaining about the late arrival of electoral material and equipment,” Miller said.

“[But] they [his team] have not provided any evidence regarding some of his claims, including about ballots already being marked,” she added.

The former leader’s claims came after a number of the less-fancied candidates expressed concern prior to the election over alleged irregularities in the voters’ roll. They also demanded that the poll be delayed, which was turned down.

The apparent disagreements over the validity of Wednesday’s vote marked the latest instance of political upheaval on the Indian Ocean island – the world’s fourth-largest and home to about 25 million people – since it became independent from France in 1960.

It has struggled to overcome political divisions after a disputed 2001 election that sparked clashes and a 2009 coup.

Earlier this year, attempts by then president Rajaonarimampianina to change the country’s electoral laws backfired and sparked nearly three months of bitter protests.

Political opponents claimed the proposed changes were aimed at barring their candidates from taking part in Wednesday’s poll.

Following the demonstrations, in June, the Constitutional Court ordered the 60-year-old to form a government of national unity with a “consensus prime minister” in order to avert a full-blown crisis.

The Madagascar head of state must step down 60 days prior to a presidential poll if he or she wishes to compete in the ballot, according to the country’s constitution.

Africa Needs Remittances More Than Ever