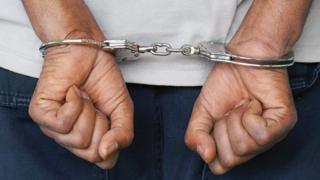 In our series of letters from Africa, Nigerian writer and novelist Adaobi Tricia Nwaubani tackles the culture of naming, shaming and public parading of suspects in Nigeria before taking them to court.

A few years ago, the Nigerian police paraded a gang of male armed robbers headed by a woman in front of journalists, and photos of these seven alleged criminals who had terrorised a part of Lagos were published.

I was shocked to identify the petite, light-skinned woman allegedly leading this deadly gang as a former secondary school classmate, with whom I had maintained sporadic contact over the years.

The Federal Government Girls College, Owerri, has produced a number of outstanding Nigerian females, including World Bank Vice-President Arunma Oteh and outspoken MP Nnenna Elendu-Ukeje. But the leader of a dreaded gang of robbers was a first for us, and the news quickly spread to our alumni across the world.

On a whim, I dialled the alleged gang leader’s phone number a few weeks later. She was pleased to hear from me, but was driving and would call back later, she said.

The din of the surrounding Lagos traffic was proof that she was indeed not locked up in a police cell.

When she did call back, she dismissed the police’s accusations, insisting that she was innocent and had simply been “set up”.

She has not been convicted of the alleged crimes and is still walking free, despite being paraded before the media and having her reputation irredeemably soiled.

The proclivity to parade suspects by the Nigerian security services and declare them guilty before the media, without a lawyer present or trial by a competent court, came to the fore recently in a heartbreaking video that has been widely published.

Nigeria’s spy agency, the DSS, said a woman who they identified as Amina Mohammed posed as the wife of a state governor to gain entry to the presidential villa in the capital, Abuja.

The officers forced her to face the camera and confess her alleged crimes.

But, she refused. Instead, she covered her face with her veil, screaming: “You will not do this to me!”

In the effort to get her to cooperate, security officials yanked her veil away from her. The woman knelt on the floor, weeping.

I have covered the undemocratic parading of 'suspects' by security agencies in #Nigeria, and this is easily one of the worst cases of indignant abuse on a citizen presumed innocent until proven guilty.

The media should NOT be seen as aiding and abetting this wrong. pic.twitter.com/tkhkPctriX

Clearly, the woman was dreadfully aware of how many Nigerian citizens have had their reputations irreparably ruined by this process.

Typically, the suspect makes a full confession before the cameras, the bruises on their faces and the presence of stern security personnel leading you to wonder exactly what might have inspired the so-called admission of guilt.

For years, Nigerians have been treated to one such show after another, but this is hardly ever followed up by news of actual convictions.

The security agents appear more keen to be perceived as having done a good job, even when they may have little evidence to convict.

Similar dramas have been the major characteristic of President Muhammadu Buhari’s much touted anti-corruption war.

Prominent Nigerians accused of incredible levels of corruption have been filmed in handcuffs, the case against them detailed in the media, with public opinion immediately declaring them guilty.

Only a few mostly insignificant convictions have been recorded. The same has been the case for high-profile Boko Haram members captured and paraded by the military.

It is possible that these media parades are an attempt by the security personnel to squeeze water out of stone, to exact some punishment for offenders since the Nigerian judiciary is notoriously slow and riddled with corruption.

The reasoning seems to be “let’s ruin their reputation even if we can’t get a conviction”.

President Buhari has complained publicly about our country’s judiciary, which he appears to view as a stumbling block to his dealing with offenders.

In a keynote address at the annual conference of the Nigerian Bar Association in August, he said: “Rule of law must be subject to the supremacy of the nation’s security and national interest.

“Where national security and public interest are threatened or there is a likelihood of their being threatened, the individual rights of those allegedly responsible must take second place, in favour of the greater good of society.”

This comment and others like it led to outrage from Nigerians, many of whom are only too aware that our democratically elected president once presided over a military government characterised by a number of notorious decrees that violated human rights.

The most telling evidence that President Buhari’s conversion from dictator to democrat may not yet be complete is the continued incarceration of Sambo Dasuki, a former national security adviser who is accused of squandering billions of dollars meant for the prosecution of the war against Boko Haram.

He pleaded not guilty and over and over again, the courts have granted Mr Dasuki bail.

Yet, he remains behind bars three years after he was arrested, and has still not been convicted of the alleged crimes.

Mr Dasuki played a role in President Buhari’s arrest back in 1983 when he was removed as head of state during a military coup, and Nigerians cannot help wonder if that little fact may not be linked to this administration’s continued defiance of court orders that the man be granted bail.