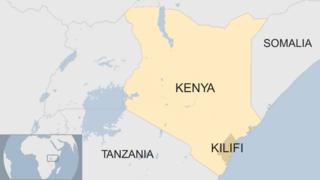 A group of unidentified gunmen have abducted an Italian woman working for an aid organisation in south-east Kenya, police say.

The men, reportedly armed with rifles, “fired indiscriminately” before taking the 23-year-old volunteer from a trading centre in Kilifi County.

Five people, including three children, were wounded and taken to hospital.

The reason for the attack and the identity of the attackers has not yet been established, police said.

However the police added that they were treating the incident, which occurred at about 20:00 local time (17:00 GMT) on Tuesday, as a terror attack.

The National Police Service wishes to inform the public that last evening at about 8pm, a gang of men armed with AK 47 rifles attacked Chakama Trading centre in Chakama, Makongeni sub location in Kilifi county, about 80 kilometres west of Malindi town. 1/6