Home » Africa » How a shepherd found a dinosaur graveyard 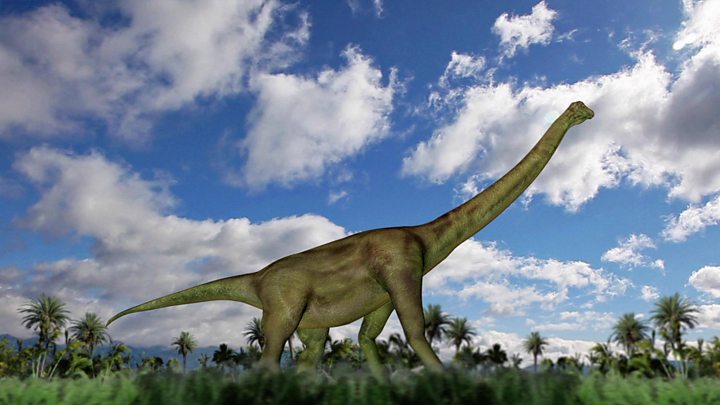 This is the story of how a shepherd, a geography teacher and a pensioner helped unearth one of South Africa’s biggest discoveries of dinosaur bones.

The shepherd, Dumangwe Thyobeka, stumbled across the dinosaur graveyard, with fossils up to 200 million years old, on a routine visit to his family’s burial place in Qhemega, Eastern Cape Province.

“My great-grandparents are buried on this land and one of my responsibilities is to look after their graves, clean them,” the 54-year-old, who has become something of a local hero, told me.

“One day while doing that I came across a large bone, I had never seen anything like that before and knew I had to show the bones to someone.”

That someone was pensioner James Rhalane, a known dinosaur enthusiast in the village.

‘Books will be written about our village’

“Growing up we were told dinosaurs were a myth, I thought they were only tales our grandparents would tell around the fire at story time,” he said.

“It wasn’t until reading some books that I started to believe they may be real. I’ve been looking into the existence of dinosaurs since 1982.

“You can imagine my excitement at being part of this and discovering them in my own backyard. I am so proud.

“Books will be written about our small village, the world will come to know of us through this discovery.

“That’ll be good for development here,” he added, barely able to contain his joy.

The third member of the trio of unassuming fossil hunters is Themba Jikajika, a geography teacher at a nearby primary school.

“They decided to bring the bones to me and when I was looking at them, I told them I suspect them to be fossils, that is according to how they appeared,” he said.

“As a geography teacher having taught about fossils in my class, when I saw the bones I immediately thought these are the remains of animals that died a long time ago but I couldn’t be sure which is why we involved the experts from Wits University and they confirmed our suspicions.”

A team of palaeontologists from various universities including Johannesburg’s University of the Witwatersrand [Wits], the Universities of Oxford and Birmingham in the UK and Switzerland’s University of Zurich spent weeks here earlier this year, excavating some of the fossils.

Leading that mission was Professor Jonah Choinière who works at the Evolutionary Studies Institute at Wits.

“The first time we went to have to look at this, it was just mind blowing. There were dinosaurs everywhere,” he said.

“We will go back next year and we’re hoping to hire a truck to move the fossils to Johannesburg, in the meantime we were able to pull out some leg bones.”

The site, in a barren landscape stripped clean of vegetation, is thought to stretch over a 20km radius (12 miles).

It is believed to be filled with hundreds of fossils from at least 12 different species of the plant-eating sauropodomorph dinosaurs.

Walking with the three local men, we come across a pelvic bone belonging to a beast experts believe was 8m (26ft) long and weighed one tonne. This has been left, encased in protective plaster, by the researchers until they can move it to a laboratory.

It is thought to have belonged to a large bodied, long-necked animal that was common in the Jurassic era (approximately 145 to 200 million years ago).

It is hoped that the remains will reveal new information about the species and shed some light on why so many may have died in this area.

The research could take years, but it has already had an impact on one young researcher.

“It was my first time finding a specimen that big. It was very exciting. It was amazing,” Cebisa Mdekazi, a masters student in palaeontology at Wits, said.

“When we worked a lot with the community of Qhemega there was a feeling of pride and dignity that we found something so big in their area.

“It was a great feeling to see my people feeling so appreciative of things they found on their land.”

Walking through a dry riverbed, which is sitting on top of the area’s hidden treasure, the three men tell me they have big dreams for this place.

They want to have it recognised as an official Unesco heritage site, which will attract researchers and other visitors and boost the local economy.

But the shepherd, Mr Thyobeka, thinks it can change the lives of young people living nearby.

“I did not get an education but I hope having these dinosaurs here will inspire our children to study science at school [and that] many black people can be exposed to these things early on in life,” he said.

The flower growers worried about Brexit