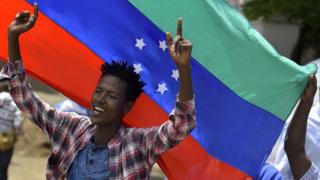 A referendum in the south of Ethiopia is being seen as a test of Prime Minister Abiy Ahmed’s abilities to control the forces of ethnic nationalism, which have threatened to increase divisions within the country.

Some two million people in what is known as the Sidama zone, are voting on whether they want their own regional state within Ethiopia’s federal system.

The referendum will see if tensions around ethnic separatism can be resolved peacefully.

Also, ahead of a general election scheduled for May next year, the vote is a test for the country’s electoral process.

Why is this happening now?

Since coming to power in April 2018, Prime Minister Abiy has been praised for his wide-ranging liberalising reforms.

He has transformed what was considered a tightly controlled security state. He also spearheaded a peace process with long-time foe Eritrea – a move which won him this year’s Nobel Peace Prize.

But his more relaxed approach to organisations and parties campaigning for greater rights for different ethnic groups has lifted the lid on underlying tensions. Clashes in different parts of the country have forced an estimated three million people from their homes in the past 20 months.

The referendum on creating a new region is part of a constitutional process that it is hoped could help satisfy ethnic ambitions in one part of the country.

A delay in holding the vote earlier this year, triggered violence in some towns in Sidama in which at least 25 people died.

What do those backing a Sidama regional state want?

Ethiopia’s 1995 constitution created nine regional states, which are mostly based on ethnicity. In other words, Tigray is dominated by Tigrayans, Amhara is dominated by Amharas, and so on.

But the Sidama became part of the Southern Nations, Nationalities and Peoples’ Region (SNNPR), home to more than 50 ethnicities.

Making up some 4% of the population, the Sidama are Ethiopia’s fifth largest ethnic group, and many feel that they deserve greater political power and recognition.

Under the previous constitution there was a separate province known as Sidamo, which, though it contained several ethnic groups, recognised the Sidama in its name.

A new federal state would mean the Sidama could make their own policies, control a regional police force and be in charge of a budget that could be spent on the priorities of the Sidama people.

It would also give them greater linguistic and cultural recognition.

What are the implications of creating a new state?

While there does not seem to be much opposition among the Sidama for the proposed new regional state, there are concerns that this referendum could set a precedent for other ethnic groups to follow.

For example, within SNNPR some among the Wolayta and the Hadiya peoples are also agitating for their own regional states. Similar calls for greater autonomy can be heard from groups in Amhara and Tigray.

The challenge for the prime minister and the government will be how to appear to be dealing fairly with all these demands without encouraging further tension, or risking further divisions within the country.

What are the practicalities of the vote?

To take part in the vote, people had to prove that they had been living in the Sidama administrative zone for at least six months.

On the ballot paper, voters will be asked to mark one of two boxes.

The electoral commission says the result should be known on Thursday.