NIOKOLO RANGER OUTPOST, Senegal — The nighttime horizon glowed red from fires started by poachers. In the distance loomed a hillside that illegal gold miners were blasting with explosives. And in the middle of a busy highway, a park ranger straddled a speckled female bushbuck antelope and slit its throat.

Threats to wildlife lurk in every corner of Senegal’s biggest national park.

Multitudes of lions, leopards, elephants and other beasts once roamed Senegal, but decades of hunting and development wiped out almost all of them.

Even here in the national park known as Niokolo-Koba, dangers abound for the small sample of wildlife that has managed to hang on.

The antelope succumbed to one of them. She was hit by a car, and the ranger put her out of her misery.

The sad manifest of wild animals left in the park includes a few dozen chimpanzees, about 100 African wild dogs and a tiny population of lions. A survey in 2011 counted 13 of them. There may be 50 now. 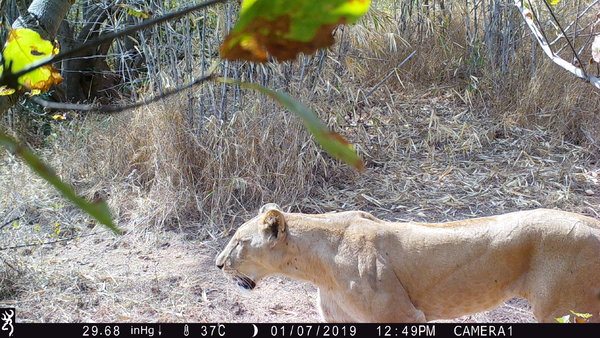 Park rangers and an international conservation group are working together to save what’s left of these animals.

In particular, the nation hopes to boost its population of nearly extinct West African lions, which have thinner manes and are lankier than others of its kind. 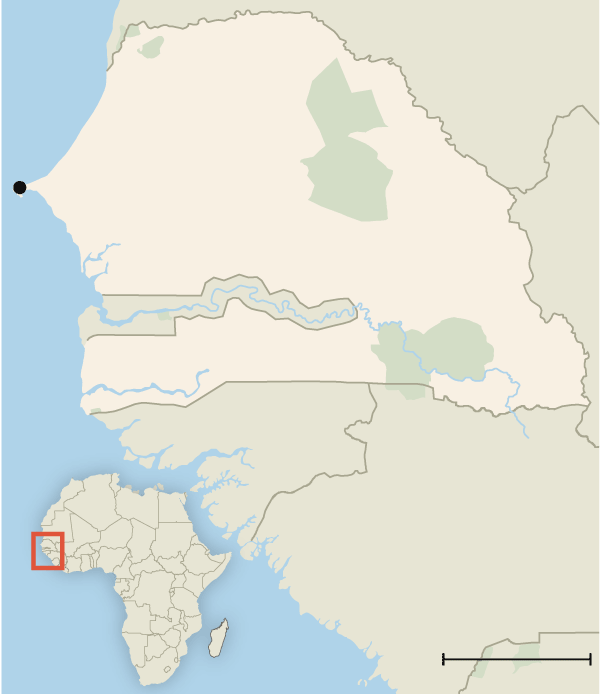 Lions are to Senegal what bald eagles are to America. An image of a lion is on the presidential seal. The national soccer team’s mascot is a lion. Statues of lions are positioned at the entrances to towns and in front of military installations. A stuffed white lion is the centerpiece of the foyer of the presidential palace. It came from abroad.

No more than 250 West African lions exist, living in small pockets in Senegal, Nigeria and elsewhere, on 1 percent of the land they once inhabited. Restoring their population means protection for the animals on down the food chain.

About a year ago, a small team from Panthera, a group that works to protect wild cats and their habitats, moved into Niokolo-Koba, organizing patrols of park rangers and building a new outpost on a grassy hill in a remote part of the protected parkland.

Or at least it’s supposed to be protected.

Senegal employs only about 130 park rangers who patrol a sliver of the 3,500 square miles of park. They are stationed in the dry savanna near the park’s main entrance, the most likely spot to see lions, and not far from a shabby set of tourist cabanas along the wide Gambia River that cater to the park’s few visitors.

Panthera’s pilot program pays for rangers to fan out into more remote and vulnerable areas at the opposite end of the park on a regular basis. That way if the lion population grows, they will have more safe terrain to roam.

For the small team stationed at the remote Niokolo Outpost next to a crocodile-laden river, the job can seem thankless. After more than a year on the ground, none had even seen a lion.

On a recent afternoon, wide plumes of black smoke stretched across the entire northern horizon from fires lit by hunters hoping to scare animals into their sights. Like the lions, the poachers were looking for an antelope dinner. The two directly compete for meals.

The blaze, which barely spared the ranger camp, had an upside for bird-watching tourists from Holland and Belgium. They pulled out binoculars to see the ground hornbills, firefinches and gray kestrels that had come to eat the grasshoppers scared off by the roaring flames.

“There are no big animals here,” scoffed Peter Grobben, one of the birders, when asked if he had spotted a lion in the 23 years he has been coming to the park.

The hunters here are not the heavily armed international poaching rings that plague reserves in other parts of Africa that have far more bountiful game to plunder.

A recent arrest was typical: a lone man in his late 60s on a rickety bicycle toting a shotgun held together by duct tape and a piece of wire.

“It’s not a war like it is in other places,” said Florence Vernadat, Panthera’s project coordinator. “It would be really easy to stop the poaching,” she said — if only more rangers were employed.

The poachers are so confident of not being caught that they brazenly dry their skins for days inside the park’s borders.

The park sits atop land rich with minerals. Blobs of rusty bauxite are scattered across the terrain, as though dropped from the heavens. Long veins of gold are buried underneath the park. Dozens of illegal miners have infiltrated one of the park’s tallest points.

On a recent morning, miners were sifting chunks of rock searching for golden threads. Using plastic explosives, they had blown 250 deep holes for mines along the hill’s ridge.

Rangers chased away the miners about six months ago, seizing jackhammers and arresting anyone they could catch. But work there shortly resumed. The frequent blasts mean the animals stay far away.

But one of the mine’s young security guards said a bus he was riding in had recently skidded to a halt on the highway at the base of the hill. A lion was crossing.

Traffic is one of the biggest threats to the animals in the park.

A major highway runs through the middle of it, and worn, overloaded trucks going too fast constantly overturn and spill their toxic contents into the grassy shoulders.

Warthogs, wild dogs and horse-like antelopes known as hartebeest frequently wind up as road kill. Rangers a few weeks ago found a hyena that had been struck. The driver had sawed off its head for a trophy.

The bushbuck, brown with white freckles, was still squirming when Lt. Lang Halima Diedhiou came across her on a recent evening after a mission to retrieve data from a camera trap.

A vehicle had struck her and she was bleeding from the stomach. He wanted to stop her suffering.

Another ranger held her thrusting legs as Lieutenant Diedhiou pulled out a knife. Soon, the squirming stopped. A rivulet of blood streamed across the pavement. He slung her carcass into the back of his pickup.

“All the time they kill them,” he said, muttering quietly to himself about the traffic.

Until that moment, the evening had been a huge success. As Lieutenant Diedhiou was walking back from changing the camera trap batteries, he stopped suddenly and pointed at large oval spheres of trampled grass. Elephant tracks.

Just months earlier, an image of an elephant had turned up on a camera. No one had seen a desert elephant in the park in years. Rangers think as many as three of them are wandering about.

Swatting away tsetse flies, Lieutenant Diedhiou practically skipped as he traced the elephant’s footsteps. He leaned over and scooped a pile of excrement into his arms, cradling it like a baby.

“When people say there aren’t elephants in this park,” he said, “I’ll show them this.”

Later that night at camp, team members came out to greet him with a mix of emotions. They mourned the dead bushbuck but squealed when they saw the elephant dung. Ms. Vernadat, the researcher, pushed her face into it, inhaling deeply. She and Lieutenant Diedhiou jumped up and down together, holding it.

A few days later, the team got another surprise. They spotted a lioness and three cubs. It was proof their efforts were paying off — for now. Her cubs were playing in the middle of the highway.