Home » Africa » In Nigeria, ‘Feminist’ Was a Common Insult. Then Came the Feminist Coalition.

LAGOS, Nigeria — During the biggest demonstrations in Nigeria’s recent history, 13 women came together to support their fellow citizens risking their lives to march against police brutality.

The women were all in their 20s and 30s. All at the top of their fields. Many had never met in person. They found one another through social media months before, and named their group the Feminist Coalition. They jokingly called themselves “The Avengers.”

“We decided that if we don’t step in, the people who suffer the greatest will end up being women,” said Odunayo Eweniyi, a 27-year-old tech entrepreneur and a founding member of the Feminist Coalition.

They raised hundreds of thousands of dollars last year over crowdfunding websites to support the demonstrators who took to the streets to denounce human rights abuses by a police unit known as the Special Anti-Robbery Squad, or SARS. The Feminist Coalition provided basic services to the protesters: legal aid, emergency health care food, masks, raincoats. But when peaceful protesters were shot by the military, and the demonstrations wound down, the Feminist Coalition did not.

Now, their sights are set higher. They want equality for Nigerian women, and they are turning their focus to issues like sexual violence, women’s education, financial equality and representation in politics.

The fight for equality won’t be easy. A Gender and Equal Opportunities Bill, first introduced in 2010, has repeatedly been voted down by Nigeria’s male-dominated Senate.

And then there’s the matter of being proud feminists, in a country where the word feminist is commonly used as an insult.

For years, identifying as a feminist in Nigeria has been fraught. The coalition’s decision to use the word in the organization’s name, and the female symbol in their yellow logo, was pointed. Many of the protesters benefiting from their assistance were men — and not all of them had been supportive of women’s rights.

“We only used the word because we wanted to let them know where the money is coming from,” Ms. Eweniyi said.

We talked to some of the women behind the Feminist Coalition about why they joined and what they are trying to change in Nigeria. 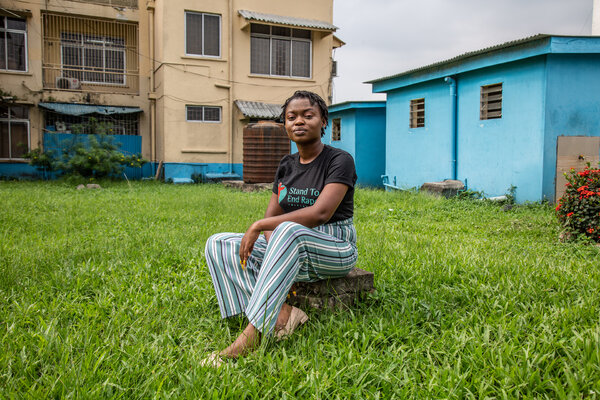 Before Oluwaseun Ayodeji Osowobi started her nonprofit organization, Stand To End Rape, in 2014, it was common to open the newspaper in Nigeria and in the crime coverage, find a picture of a child rape victim, with no thought to how that public identification might affect her life. Women were raped and killed, with no consequences. Many health care providers had no idea how to collect evidence of rape.

Ms. Osowobi, 30, is trying to change attitudes by changing public policy and practices. Her nonprofit runs seminars to help people prevent sexual violence, and a rape survivors network, where survivors can share experiences, mentor each other and feel less alone. She’s worked on legislation prohibiting sexual harassment and violence.

But men are usually the ones choosing whether or not to pass such legislation.

“We need more women to get in those spaces and make important policies and decisions that amplify the voices of other people,” Ms. Osowobi said.

It was Tito Ovia’s national youth service that made her realize she wanted to work on public health. Posted to Nigeria’s AIDS control agency, she noticed that because of a lack of data, it was hard to tell if money spent on preventing HIV/AIDS was making a difference.

Ms. Ovia, 27, co-founded a company with friends in 2016 that aims to try to make sure that health care across Africa is driven by data and technology. The company, Helium Health, has helped hospitals and clinics set up electronic medical records and hospital management systems.

She said she hadn’t expected the work of the Feminist Coalition to be so serious, supporting protesters as they risked their lives to try to change a police system that brutalized young people.

“I thought it was going to be a lot more fun than this, let me not lie,” she said, laughing. “I thought we’d meet up, we’d drink, we’d bitch about men. We’d do some work. I didn’t know that lives would be threatened.”

Before the Feminist Coalition, Damilola Odufuwa, 30, set up Wine and Whine, a support group for Nigerian women.

She wanted to create a safe and fun space where young women could get together, have a drink and complain about sexual harassment in the workplace, the pressure to get married, the patriarchal system and its gatekeepers, and any other frustrations they had — and then begin to figure out solutions.

Ms. Odufuwa, the head of public relations in Africa for a large cryptocurrency exchange, had recently moved back to Lagos from the United Kingdom when she set up Wine and Whine. She was struck by how women were treated in Nigeria.

She and her co-founder Odunayo Eweniyi — the same duo behind the Feminist Coalition — made sure that Wine and Whine also wore its feminism as a badge of honor.

“We’re a feminist organization,” Ms. Odufuwa told a male talk show host in a 2019 interview about Wine and Whine.

“Oh!” replied the host, sounding taken aback by her use of the word.

“We’re very feminist,” she responded, laughing. “Your reaction tells me that feminism is perceived as this bad thing.”

Odunayo Eweniyi, a 27-year-old tech entrepreneur, didn’t realize quite how big a deal putting “feminist” in the group’s name would turn out to be.

“It wasn’t supposed to be a rallying cry for the entire movement,” she said. “Honestly, now that it is, I’m very proud we used the word feminist because people relate with it in a way that doesn’t equate the word feminist to the word terrorist.”

Though Nigeria has a history of feminist movements, identifying as a feminist is seen as radical.

Ms. Eweniyi recently got tattoos of her favorite equations: Schroëdinger’s equation, the golden ratio, and the uncertainty principle.

The savings app start-up that Ms. Eweniyi launched in 2016, called Piggyvest, tackles one of the main problems the Feminist Coalition has identified — financial equality for women. The idea is that people should be able to save and invest even small amounts of money. It has more than 2 million customers — men and women.

As an anchor of one of Nigeria’s biggest TV news shows, Laila Johnson-Salami remembers vividly her male co-host telling a producer to say his name first.

But she was undaunted. Through Newsday, the show on the TV channel Arise, she kept Nigerians informed about the protests, which adopted the hashtag #EndSARS.

At 24, she’s the youngest member of the coalition. Her main goal, she said, is to attract a younger audience. And recently she launched a podcast that may help her achieve that.

She uses her platform to hold politicians to account, but said, “If there’s one thing I know for sure in this life, it’s that Laila will never go into politics.”

The interviews Ms. Johnson-Salami does on the Broken Record Podcast are very different from her television interviews. They’re intimate chats on everything from the importance of vulnerability to adoption and investment.

“Time’s up, it’s over,” tweeted Fakhrriyyah Hashim in February 2019. “You are done getting away with monstrosities against women.”

Her tweet kicked off northern Nigeria’s #MeToo movement. In it, Ms. Hashim coined the hashtag #ArewaMeToo — Arewa means “north” in Hausa, a West African language spoken by most northern Nigerians.

In a highly conservative region with what Ms. Hashim, 28, has called a “culture of silence,” #ArewaMeToo unleashed a deluge of testimonies about sexual violence. When it spilled off social media and into street protests, the Sultan of Sokoto, the highest Islamic authority in Nigeria, banned it.

Another campaign Ms. Hashim launched, #NorthNormal, pushed for Nigerian states to apply laws that criminalize violence and broaden the definition of sexual violence.

Her women’s rights activism has brought her death threats and abuse. Now, she’s put some distance between herself and the people behind those threats, having taken up a fellowship at the African Leadership Centre in London.

The Feminist Coalition members were all working from their homes because of the pandemic, so being in London during the #EndSARS protests, she was just as able to raise awareness and funds online.

“I knew that whatever goals and objectives we set, we were going to achieve that,” Ms. Hashim said.

An estimated two-thirds of Nigerian girls and women do not have access to sanitary pads. They can’t afford them.

Karo Omu, 29, has been fighting to get pads and other sanitary products to Nigerian girls for the past four years. She focuses on girls in public schools who come from low-income families, and girls who have had to flee their homes and are living in camps.

There are 2.7 million internally displaced people in northeastern Nigeria as a result of the violent and uncontrolled insurgency waged by the Islamist group Boko Haram and its offshoots. And for many women and girls living in the camps, it is a struggle to get enough food and clothing, let alone expensive sanitary pads.

Her organization, Sanitary Aid for Nigerian Girls, hands out reusable pads, bought with money crowdfunded by Ms. Omu and her colleagues, so that girls have one less thing to worry about. Some of the girls they’ve helped had never had a pad before.

“Women’s issues are fought by women,” she said.

The Best Employers in Africa