ALGIERS — High above the sea in a heavily guarded villa, Algeria’s 82-year-old president, Abdelaziz Bouteflika, sits in a wheelchair — mute, paralyzed, barely able to move his hands. Hovered over by a flurry of attendants and family members, he has not uttered a single word in public, much less given a speech or interview, since a stroke in 2013.

Twenty miles away in the capital, Algiers, tens of thousands of demonstrators fill the streets every week loudly demanding his departure, and that of the extensive, ill-defined entourage around him that Algerians call simply the “power,” the nexus of high-ranking officials, wealthy businessmen and military officers who actually run the country.

The demonstrations, the largest in over 30 years, have grown larger every week and seem unstoppable. Algeria, the largest country in Africa and a rare pillar of stability in the Arab world, now faces an uncertain future.

The protesters’ demands are unambiguous: After two decades of undivided reign, Mr. Bouteflika, his clan, and his system must go.

“We feel like we’ve been violated for 20 years,” said Haid Mohamed Islam, a 27-year-old doctor standing outside the modernistic national library on a recent wind-swept day. “It’s time to break the chains.”

While it remains far from clear what happens next, a sense that change is inevitable is sweeping the country. 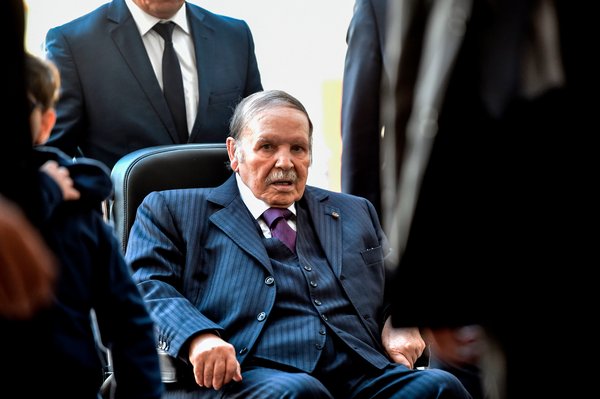 The protest has caught on across the country and among all classes of society, from bankers to bakers to truck drivers to teachers to waiters to students. “It is extraordinarily diverse,” said Nacer Djabi, a sociologist.

An offer by Mr. Bouteflika that he would not run for a fifth term, which the government portrayed as a major concession, was roundly rebuffed by the protesters because it fell short of their demand that he step down immediately and because it appeared to leave him in office indefinitely. The episode seemed only to energize them.

The government and the security forces, adept at swatting away the small protests that periodically erupt in Algeria, seem stymied. Its officials say they have ruled out firing on the protesters. And as the protesters’ numbers have grown, a violent response could backfire.

Although it remains difficult to imagine the government yielding to the protesters, recently there have been positive signs of at least a tacit acceptance.

State news media, at first barred from covering the protests, have begun reporting on them. “The Street Is Not Backing Down,” was the banner headline in the daily Liberté on Wednesday.

The ruling National Liberation Front and the army have joined the chorus of praise for the demonstrators, with the chief of staff hailing their “unequaled sense of civic responsibility.”

“Just on its face, the dynamic is really very strong,” said Louisa Dris-Ait Hamadouche, a leading political scientist here, her words nearly drowned out by thousands protesting around her on Friday.

For decades, Algeria was seen by allies on both sides of the Atlantic as a bulwark against the regional Islamist threat. After the army brutally crushed an Islamist insurgency in the 1990s, the military chose Mr. Bouteflika, a wily ex-foreign minister whose political roots go back to the earliest years of Algerian independence, to lead the country.

Algerians welcomed the end of the nearly decade-long conflict and accepted Mr. Bouteflika with it, an arrangement made even easier as oil money began flowing freely in the early 2000s, and with it generous social benefits.

In 2011, Algeria proudly rode out the Arab Spring, its leaders mocking the reckless, pro-democracy demonstrators in neighboring countries even as they shut the country off from the outside world. There are virtually no tourists here, and downtown Algiers is free of the international commercial brands seen elsewhere.

Mr. Bouteflika also cloistered himself. According to journalists and political scientists here, he has never given an interview in the Algerian news media in his two decades in office. Since his stroke, even his body has disappeared: He has been replaced in public appearances by his framed portrait, known here as “the frame.”

A top member of the governing coalition, speaking on condition of anonymity to talk freely, said the Bouteflika system was built on patronage and corruption. With oil fetching high prices, “money flowed like water,” he said. “There was corruption in bidding. Easy bank loans. People got rich on public money.”

But in 2014, the prices of oil and gas, which account for 97 percent of the country’s exports, started falling. Unemployment among the young bit deeply as the government cut social benefits.

Last month, when Mr. Bouteflika announced he would run for a fifth term, the bottom fell out. Algerians had had enough of his system, and his physical incapacity became a metaphor for the withering country.

Ordinary Algerians, in the grimy downtown streets where great chunks of plaster are peeling from the Haussmann-style buildings, in the shabby cafes made shabbier by five years of fluctuating oil prices, and in the mass demonstrations, say there is no going back.

“They thought that because we were quiet, we were stupid,” said Rabah Bouberras, 32, a shopkeeper from the suburbs who was demonstrating in Algiers on Friday. “But the people are not going to forgive them. We’re not hungry. It’s a question of dignity.”

Corruption has become a major grievance.

“In my sector it’s flagrant,” said Abdenour Hadjici, a sales manager for a plaster company. “There are certain people that are favored.” A builder he knows, for instance, got a cheap loan because he knows a high-placed general, he said.

But it is the central demand of the protesters, that the whole Bouteflika system must go, that would be hardest to satisfy, government insiders and analysts here say.

“The clan that governs this country isn’t going to just let go just like that,” said Zoubir Arous, a leading sociologist, as he watched a stream of chanting youth, many draped in the Algerian flag, march on a downtown street. “It’s a question of life or death for them.”

And “the system” is wider than Mr. Bouteflika and his cronies. Eliminating it would required purging a tentacular web of corruption encompassing thousands of people and built up over years.

“Everybody’s been co-opted,” said Mr. Djabi, the sociologist. “It was, ‘Come with me, and you will have everything.’”

Inside the gargantuan marbled government buildings constructed with oil money, there is worry and hesitation. Officials, stunned by the size of the demonstrations, insist occult forces are guiding them.

The demonstrations have been taken over by opposition politicians, they say, or Islamists, though there is little evidence of either at the demonstrations. The officials are bewildered at the absence of leaders among the protesters, and at the total rejection of the government’s offers.

“They’re saying, all those who are part of the system have to go, but that’s excommunication,” exclaimed a top official, who declined to be quoted by name. “We recognize that there are reasons for frustration. But does that justify calling into question everything that has come before?”

There is also the question of who is really in charge and who has the authority to negotiate with the protesters.

Mr. Bouteflika is said to be barely able to speak, though top officials and friends insist that he is lucid and capable of dispensing directives.

“He’s in control of his faculties, 100 percent,” Lakhdar Brahimi, a former United Nations negotiator and friend of Mr. Bouteflika’s, said in an interview here this week. He said he had recently seen the president, whom he has known since they were young revolutionaries together in the early 1960s.

“Still, the fact is, he’s disappeared from the scene,” Mr. Brahimi said. “And that creates a problem.”

Revolution has a cherished place in Algerian memory, and the victory over France almost 60 years ago is enshrined in national pride. In the late 20th century, Algeria was a global archetype of Third World revolution and ground zero for revolutionaries from the Black Panthers to the African National Congress.

Now France is watching events here anxiously from across the Mediterranean. Home to an Algerian diaspora in the millions, France is already reckoning with the boatloads of young would-be migrants who attempt the dangerous crossing.

The protesters say rising up against oppression is a hallowed national tradition.

“Our parents made the revolution,” said Hassen Khelifati, 51, a prosperous insurance executive who has participated in the demonstrations. “For us, at least we will be able to say, we tried. We can’t just say to our children, we were cowards.”

He is joined on the streets by a banker, Mallem Amel, 25. “There’s been this consciousness raising,” she said. “We can’t stay in this situation.”

And a doctor, Zaidi Hamza, 26. “The Algerian people want a radical change,” he said. “There isn’t a single category in the population that will negotiate with them.”

They say they will fight to the end.

“We’re not afraid of a blood bath,” said Zohir Geurroumi, a 23-year-old law student. “This isn’t for us. It’s for our descendants.”

One of Senegal’s Most Promising Jockeys