NKANDLA, South Africa — Jacob Zuma, the former president of South Africa, was taken to prison on Wednesday to begin serving a 15-month sentence, capping a stunning downfall for a once-lauded freedom fighter who battled the apartheid regime alongside Nelson Mandela.

The Constitutional Court, the nation’s highest judicial body, ordered Mr. Zuma’s imprisonment last month after finding him guilty of contempt for failing to appear before a commission investigating corruption accusations that tainted his tenure as the nation’s leader from 2009 to 2018.

Under Mr. Zuma, who was forced to step down, the extent of crony corruption within the governing African National Congress Party became clear, turning a once heralded liberation movement into a vehicle of self-enrichment for many officials. The corruption led to the gutting of the nation’s tax agency, sweetheart business contracts and rivals gunned down in a scramble for wealth and power.

After Mr. Zuma, 79, failed to report to prison within five days of the court’s ruling as the court had ordered, police officials went to arrest him on day eight, driving him out of his compound in a long convoy of cars 40 minutes before a midnight deadline. His family said he had voluntarily surrendered. The arrest followed a week of tense brinkmanship in which the former president and his allies railed against the high court’s decision, suggesting, without evidence, that he was the victim of a conspiracy.

Those comments whipped up Mr. Zuma’s supporters, who stationed themselves by the hundreds outside his rural homestead in Nkandla on Sunday and said that the police would have to kill them if they wanted to get to the former president. But there was little such resistance seen on Wednesday night, and only the lights of reporters’ cameras illuminated the darkened street outside the compound.

While much of the country praised the court’s ruling as an affirmation of South Africa’s democratic system and the principle that no one is above the law, the standoff of the past week exposed deep divisions in this young democracy and in the African National Congress, or. A.N.C., the liberation party that has ruled the nation since apartheid fell in 1994.

Mr. Zuma, whose tenure as president was marked by scandal and mismanagement, is nevertheless a populist figure deeply beloved in some corners, particularly among Zulus in his home province, KwaZulu-Natal. His loyalists gathered on Sunday outside his compound, a series of thatched-roof buildings sitting on a slope — a site that became associated with greed when as president he was accused of using taxpayer money for upgrades.

Many argued that Mr. Zuma’s opponents within the African National Congress had sought to use the courts to prevent him from retaking control of the party from his former deputy and the current president, Cyril Ramaphosa.

South Africa’s image as a leader on the African continent — honed by Mr. Mandela and his successor, Thabo Mbeki — took a plunge during Mr. Zuma’s rule. Mr. Zuma, who had no formal schooling, was seen as a champion of struggling South Africans in rural areas and townships.

But he was dogged by accusations of corruption even before he was elected, and he left the country with a stagnant economy, high unemployment and even more deeply mired in the extreme inequality that predated his rule.

The government now alleges that tens of billions of dollars were siphoned from state coffers during Mr. Zuma’s tenure, which he denies.

During a rally on Sunday afternoon, Mr. Zuma stood on a packed stage to address his followers, who squeezed shoulder to shoulder, hanging on his every word. They laughed at his jokes and chanted struggle songs with him. They waved signs with messages like, “We demand our land that was stolen 573 years ago back,” and, “We refuse to be governed by apartheid spies.”

“I fought for freedom,” Mr. Zuma told the crowd. “I was fighting for these very rights. No one will take my rights away. Even the dead that I fought against during the liberation struggle will turn in their graves.”

During a news conference on Sunday evening, Mr. Zuma argued that he was sentenced without a trial and compared his situation to the apartheid struggle.

“I have a duty and obligation to ensure that the dignity and respect for our judiciary is not compromised by sentences that remind our people of apartheid days,” he said.

Hours after appearing on a crowded stage before legions of supporters, often without wearing a mask, Mr. Zuma also told the news media that sending someone his age to jail in a pandemic “is the same as sentencing me to death.” 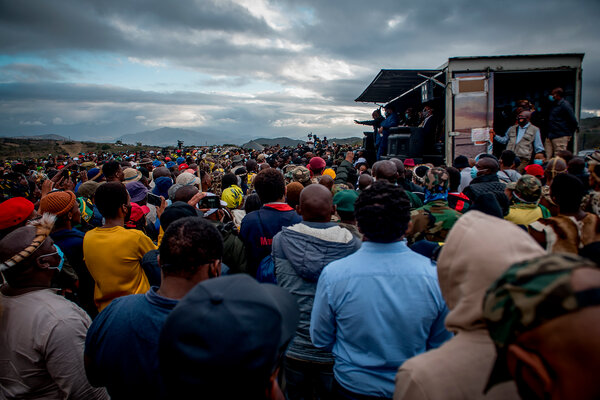 While he said his supporters needed to use peaceful means to protest on his behalf, he later said he could not be held responsible for how they reacted.

Fearing that the situation could get out of hand, African National Congress leaders had dispatched party officials to Mr. Zuma’s home before the deadline to help maintain calm and broker a solution. While the arrest of the former president could deepen fractures within the party, senior leaders said they believed it would not tear the organization apart. Past disputes have led to small breakaway parties, but nothing to shake the dominance of the African National Congress.

Still, the concerns over what was unfolding outside Mr. Zuma’s home were significant. In a statement, the party said the situation did “not represent a popular uprising, but has been engineered from within the ranks of the A.N.C.”

Some A.N.C. leaders worried about a fomenting of Zulu nationalism in a country that has fought to keep ethnic divisions in the past, when the apartheid regime used them to help maintain white minority rule. In its statement, the African National Congress said, “The sustenance of our democracy requires that we constantly ensure the assertion of the values of nonracialism and rejection of any manifestations of ethnic chauvinism.”

Mr. Zuma’s prison sentence stemmed from his refusal to testify before the corruption commission led by Justice Raymond Zondo, the deputy chief of the Constitutional Court. Mr. Zuma defied an order in January and began a sharp public critique of the judiciary.

He then ignored multiple requests from the Constitutional Court to defend his unwillingness to testify. Mr. Zuma has said that he would have testified before the corruption panel if Justice Zondo had recused himself because he felt that the justice was biased against him.

In announcing the court’s decision last month to send Mr. Zuma to prison, Justice Sisi Khampepe, the acting chief at the time, said that the former president had carried out “a series of direct assaults” on the judiciary “as well as calculated and insidious efforts” to “corrode its legitimacy and authority.”

“If with impunity litigants are allowed to decide which orders they wish to obey and which they choose to ignore, our Constitution is not worth the paper upon which it is written,” she said, reading from a decision the court backed 7 to 2.

Days later, Mr. Zuma filed a motion asking the court to consider rescinding its order of imprisonment. He also filed a motion in a lower court asking it to prevent the police from arresting him until after a Constitutional Court hearing on Monday to decide on his motion to rescind.

In a hearing this week in the lower court, Mr. Zuma’s lawyer doubled down on his client’s argument that it was unjust for him to be sentenced to prison without having had a trial. The lawyer, Dali Mpofu, also suggested that there could be civil unrest if Mr. Zuma were sent to prison, referring to a massacre in 2012 in which the police fatally shot 34 miners on strike in the town of Marikana.

During the hearing, Tembeka Ngcukaitobi, a lawyer for the commission, said that Mr. Zuma needed to be arrested on charges of repeatedly defying the judiciary.

“We are dealing with a repetitive, recalcitrant lawbreaker in the form of Mr. Zuma,” Mr. Ngcukaitobi said.

15 African Artists on the Rise