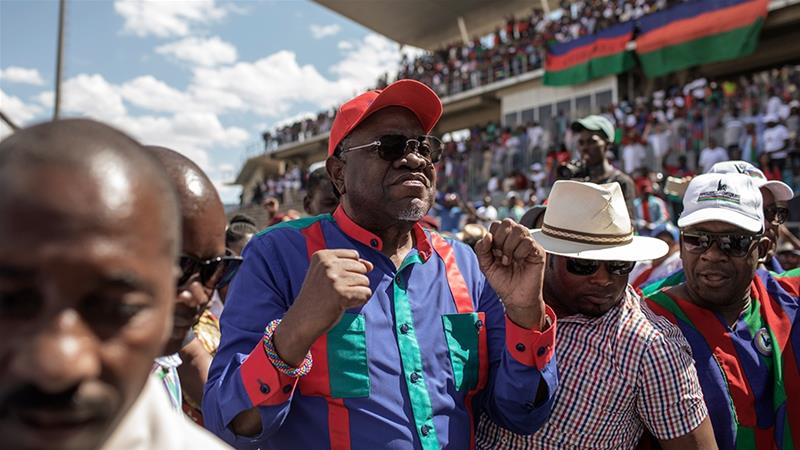 Namibians are heading to the polls in a tight election seen as a major test for the country’s ruling party, which has been in power since independence in 1990.

More than 1.3 million people have registered to vote in Wednesday’s presidential and parliamentary polls, contested by 11 candidates and 15 parties respectively. Polling stations opened at 05:00 GMT and will close at 19:00 GMT.

Incumbent President Hage Geingob, 78, is seeking re-election after a first term shaken by a severe economic downturn and a corruption scandal in the country’s key fishing industry.

Disaffection, especially among jobless youth, has fuelled support for former dentist Panduleni Itula, 62, a former member of the ruling South West Africa People’s Organisation (Swapo) party, who is standing as an independent candidate.

Other presidential contenders are academic and social worker Esther Muinjangue, 57, who is the first woman to run for president, and McHenry Venaani, 42, who at 25 became the country’s youngest legislator in 2002.

On Monday, a court in the capital, Windhoek, dismissed a case seeking to prevent the use of electronic voting machines, which some opponents of Geingob fear could be used to rig the result.

The election comes shortly after allegations of corruption and money laundering in the fishing industry led to the resignation of two government ministers in the wake of a joint investigation between Al Jazeera’s Investigative Unit, the Icelandic State Broadcaster RUV and the Icelandic magazine Stundin.

Minister of Fisheries and Marine Resources Bernhard Esau and Minister of Justice Sacky Shanghala were accused of taking bribes from Icelandic fishing company Samherji following the release of leaked documents provided by the whistle-blowing group WikiLeaks.

Esau was detained on Saturday but was released shortly afterwards as prosecutors said there was an error in his arrest warrant.

Arrest warrants in connection to the case were also issued for Shanghala; former chairman of the state-owned fishing company, James Hatuikulipi; and Esau’s son-in-law, Tamson Hatuikulipi.

Namibia is one of the most mineral-rich countries in Africa, with diamonds, silver, uranium, copper, zinc and gold representing more than 30 percent of its exports.

Despite these riches, however, the nation of some 2.5 million has been hit by an economic slowdown while unemployment – especially among the younger generation – remains stubbornly high.

In addition, economic inequality among the country’s black and white population is glaring. About 6 percent of the country’s inhabitants are white, with some German-speaking descendants from the colonial era and others originally from South Africa.

The country is also experiencing one of its worst droughts in history, wreaking havoc on crops, scorching grazing lands and threatening the food supply.

Al Jazeera’s investigation about corruption in the Namibian fishing industry, Anatomy of a Bribe, will be released on December 1.