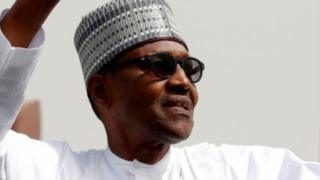 Nigeria’s President Muhammadu Buhari says he has ordered the police and military to be “ruthless” with vote-riggers, following the last-minute postponement of the general election.

The incumbent president also called the electoral commission incompetent and ordered an investigation into why the vote was delayed.

Mr Buhari made the comments at an emergency meeting of his All Progressives Congress party (APC) in the capital, Abuja.

“Anybody who decides to snatch [ballot] boxes or use thugs to disturb it [the vote] – maybe this will be the last unlawful action he will take,” he said.

He went on to say that anybody who tried to interfere with the election would do so “at the expense of his life”.

“It is indeed a licence to kill, which should not come from any leader of any civilised nation,” said PDP party spokesman Kola Ologbondiyan.

In his speech to senior party members about the postponement, Mr Buhari said questions needed to be answered about “why such incompetence manifested itself” and promised an investigation.

Inec postponed the election just over five hours before polling stations were due to open on Saturday morning.

They said this was because of problems with transporting ballot papers to some parts of the country.

The presidential and parliamentary polls will now be held on Saturday 23 February.

‘My Blood Is Boiling’: War Fever Surges in Ethiopia as Its Civil War Spreads

Oral Health Should Be A Development Priority

One Man’s Waste Is Another Man’s Gold