JOHANNESBURG — A top member of South Africa’s governing African National Congress party appeared in court on Friday, charged with corruption, in a rare sign that powerful members of the party could be held to account for endemic pilfering of public funds under former President Jacob Zuma.

Ace Magashule, the party’s secretary general, was charged with 21 counts including fraud, money laundering and corruption, in a court in Bloemfontein, the capital of the Free State province, where he headed the government for nearly a decade. Mr. Magashule, who denies any wrongdoing, was released on bail.

Mr. Magashule is considered one of the A.N.C.’s “top six” — the most influential members of the party that has governed South Africa since the end of white minority rule in 1994. He oversees the day-to-day running of the party, and his arrest could, in theory, push him to leave the influential position.

Earlier this year, the party requested that all members facing graft charges step aside until their cases were resolved, although dozens of midlevel officials have yet to follow that guidance.

But this case is profoundly consequential for both Mr. Magashule and the A.N.C. He is the highest-profile serving politician to face charges since Cyril Ramaphosa was elected president two years ago in a fiercely contested leadership race. In a fractious party, Mr. Magashule has emerged as a top rival to Mr. Ramaphosa, instead throwing his support behind the former president, Mr. Zuma.

The charges against Mr. Magashule are related to a government contract to survey low-income houses built with asbestos. The contract, worth 225 million rand, or around $14.4 million, was awarded in 2014, while Mr. Magashule was still the head of the Free State, but six years on, many residents say their homes were never checked or fixes made. Prosecutors allege that the companies awarded the contract outsourced the work at a fraction of the original cost, and subsequently funneled millions to accounts accessed by A.N.C. associates. 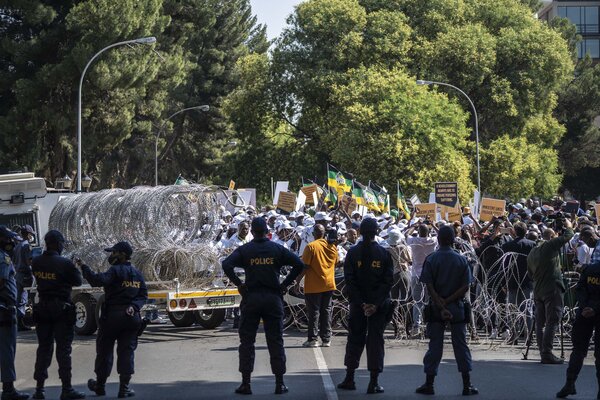 The lengthy charges ranged from minor kickbacks to plundering millions from the state coffers, implicating 13 people in total and five companies. Prosecutors allege that Mr. Magashule and other defendants stole public funds worth $13.7 million, in one case. The prosecutors say Mr. Magashule also accepted $3,431 from a businessman who is also facing the court to pay the school fees of his personal assistant, Refiloe Mokoena, who is now serving as a witness for the state. Another allegation involves Mr. Magashule’s directing around $16,000 be paid to a travel company to fund a trip to Cuba for party members.

Mr. Magashule arrived in court on Friday without the leg shackles usually worn by defendants, as thousands of supporters rallied outside. Dressed in a sharp suit, he struck a relaxed pose, smiling and posing for court photographers.

With the party facing mounting public anger over the looting of funds meant for victims of the coronavirus pandemic by some party members and their allies, Mr. Ramaphosa has intensified anti-graft messaging in recent months. After winning the internal party election with promises of “a new dawn,” he has found his attempts to address the issue repeatedly undermined by allies of his predecessor.

The government estimates that at least 500 billion rand, or around $32 billion, was stolen through systemic political corruption during Mr. Zuma’s tenure. Mr. Zuma himself is facing charges of corruption relating to a 1999 arms deal he brokered when he was deputy president.

Mr. Magashule has been implicated in several past corruption scandals. Perhaps the highest-profile, the Vrede dairy farm case, saw $21 million intended as aid for aspiring Black farmers instead funneled to the A.N.C.’s political allies. The episode came to symbolize widespread corruption under Mr. Zuma’s tenure and accusations that the party had betrayed poor Black South Africans. No charges were ultimately filed against Mr. Magashule in that case.

Although the charges announced on Friday could take years to reach a conclusion, experts say they may represent a crossroads for the A.N.C.

“There are so many contradictory noises about who the real A.N.C. is — is it the cleanup A.N.C. or the inherently corrupt A.N.C.?” said Susan Booysen, an author and professor at the University of the Witwatersrand in Johannesburg. “This ambiguity of who and what the A.N.C. is, that’s actually on the bench — and the A.N.C. continues to survive and do well because of this ambiguity.”

But the case has also drawn an emotional response from many members of the public. During his premiership, Mr. Magashule, a former anti-apartheid fighter, led a drive to recruit tens of thousands of new, younger members to the party, and he remains a popular figure.

Thousands of his supporters walked through the streets of Bloemfontein waving banners with messages of support on Friday. Many were dressed in the gold, black and green of the A.N.C. or in military fatigues, a nod to the apartheid resistance roots of the party.

“You will never silence the roaring voice of the Black majority,” the message below read.

Forget your manners on Gambia’s roads

More than 1,100 villagers killed in Nigeria this year: Amnesty