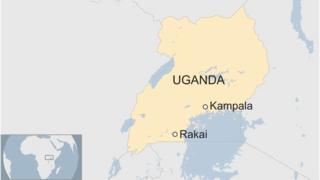 An alleged arson attack on a boys’ boarding school dormitory in southern Uganda has left at least 10 people dead and dozens more injured.

Reports suggest the fire began early on Monday morning at a block that housed dozens of students from St Bernard Secondary School in Rakai.

Officials have said the dormitory’s doors were padlocked, trapping dozens inside.

Henry Nsubuga, the school’s headmaster, described the fire as a “heinous act”.

Ben Nuwamanya, a local police commander, told the AFP news agency that three people, including a school guard, had been arrested by police for questioning.

He also confirmed that 20 other students were in hospital in a critical condition, with officials warning the death toll may rise.

Police spokesman Patrick Onyango told Reuters that the authorities were investigating whether expelled former students were involved in the alleged arson.

Gerald Karasira, a local councillor, said people living nearby desperately tried to put the fire out using sand, water and bricks but rescue efforts were complicated by the locked doors and heavy smoke inside the property.

“Had the firefighting truck been near within the district, maybe we would have saved lives and property,” he is quoted as saying by New Vision newspaper.

The Rakai district where the school is located is about 280km (170 miles) south of the Uganda’s capital Kampala, near the country’s border with Tanzania.

A number of senior government officials, including the education and security ministers, have travelled to the school in the aftermath of the blaze.

Brussels Pulls the Plug on Aid to Addis

What are the US’s intentions in Africa?