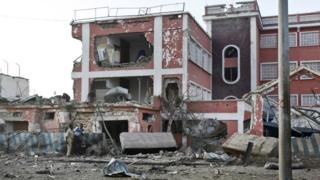 On 1 November, al-Shabab militants attacked a hotel in the Somali capital, Mogadishu, killing 15 people. It was the latest in a series of attacks on hotels by the Islamist group. The BBC’s Mary Harper explains why hotels are so important to doing business in the Somali capital and how al-Shabab targets them.

New Year’s Day in Mogadishu was drawing to a close. I was having supper with friends when an enormous blast thundered through the night air.

This was not the usual “Mogadishu music” – as the locals call it – of grenade explosions and gunfire. Everybody, including the senior military advisers, who were eating at a table next to mine, looked frightened.

After the first shock, people got on their phones. “It’s the Jazeera Palace Hotel,” said a friend who looks after my security when I’m in town and has contacts all over the city.

Some of us ran up on to the roof, and there, just a few hundred metres away, were flames shooting out into the darkness, the remains of a suicide vehicle, which had been driven at high speed towards the thick, high perimeter wall of the hotel.

Ambulances and military vehicles raced down the street, lights flashing, sirens screaming. Shortly after they arrived at the Jazeera Palace, there was another massive explosion.

Like many other insurgent groups, al-Shabab often conducts double suicide attacks, waiting for the emergency services and onlookers to gather at the scene before sending in another vehicle to ensure maximum casualties.

Then it sends in the foot soldiers, to occupy the building, usually until all of them are killed by the security forces, and sent, they believe, on their way to Jannah (paradise) as martyrs.

About 10 minutes after the second blast, a senior Somali security official and his entourage entered the place where I was. He had been the target of the attack.

We collected plastic chairs and put them out in a circle in the courtyard. The men sat there in stunned silence. At least 10 people had been blown up at the hotel, including members of their team.

General Abdikarim Dhagabadan was not so lucky. Last week, he and at least 14 others were killed in an al-Shabab attack on another high-end hotel, the Sahafi.

A militant contacted me by phone while the siege, which lasted for several hours, was still going on.

“We have been after the apostate general since August 2011 because he commanded the operation that forced us out of Mogadishu. We consider as legitimate targets five, six or seven hotels in the capital, I forget the exact number. They know who they are because they provide lodging for members of the apostate government, certain members of the diaspora, foreigners and other infidels.”

Some Mogadishu hotels are like fortresses, with high surrounding walls, two sets of giant metal gates, private security and scanners. This is to try to protect government officials and other al-Shabab targets, who often live there for years.

Hotels have long been a central part of Somalis’ urban culture, wherever they are in the world, as so many of them move around a lot, in the same way the traditional Somali nomads do.

Al-Shabab has a highly sophisticated intelligence network, so it knows who is in which hotel and when. Security officials say the militants usually have sympathisers working inside the hotels, who can inform on key details such as which room a particular individual is staying in. When Central Hotel was attacked on 20 February this year, one of the suicide bombers was Luul Dahir, who worked at the reception.

The people of Mogadishu refuse to give in, despite the regular attacks on hotels and other targets associated with the government, African Union troops, the United Nations and others.

Every time I have been in the city at the time of a big attack, I am astonished at how quickly the damage is cleared.

I visited the site of an attack on a UN convoy near the airport in December 2014.

Even though it was only about an hour after the blast, the road had been cleared, the carcasses of vehicles moved to one side. Women in masks were hosing down the street, but only after Western men in camouflage and dark glasses had sifted through the wreckage, collecting evidence in plastic bags.

Suicide attacks have generated business for Somalis. Some move in quickly after a car bombing, trying to retrieve any surviving spare parts and other scraps before the security forces shoo them away.

12 September 2012: A suicide attack at the gates of the Jazeera Palace Hotel targets new President, Hassan Sheikh Mohamud. The president is unharmed but at least seven people are killed

20 February 2015: Some 20 people, including an MP and Mogadishu’s deputy mayor, are killed after the Central Hotel is hit by a car bomb and a suicide attack and gunmen storm the hotel mosque and open fire during Friday prayers

26 July 2015: A lorry is used to carry out a huge bomb explosion at the Jazeera Palace Hotel, killing at least 13 people

22 August 2015: At least five people are killed in a suicide car bomb attack near the Juba Hotel

1 November 2015: Gunmen use two car bombs to blast their way into the Sahafi Hotel compound before storming the building, killing at least 15 people including one MP and the general who led the 2011 offensive that drove al-Shabab out of Mogadishu

On the day after the 1 January 2014 attack on the Jazeera Palace Hotel, I went to pick up a friend who lives there so we could go for a swim in the warm blue of the Indian Ocean.

Electricians were busy on the street outside, repairing electrical wires that had been brought down by the blasts. The hotel’s many shattered windows had been boarded up and painted white. A waiter showed me around the dining area, which he said had taken the force of the blast.

Everything was tidy, if battered, and people were sitting there drinking Somali tea and fresh watermelon juice, and eating large servings of meat and pasta.

My friend showed me the reception desk, which he and many others had hidden behind during the attack. He couldn’t hear me properly as his ears were still ringing from the blast.

And even though one of the Jazeera Palace’s walls was partially brought down in a huge al-Shabab truck bombing this July – the third time the militants have attacked the hotel – he’s still living there.

Inside Thebe Magugu's Tale of Queer Love and African Spirituality