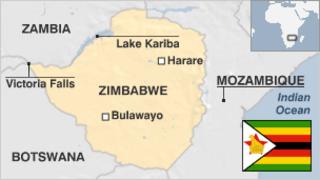 The struggle for independence, land and power runs throughout Zimbabwe’s modern history. Veteran President Robert Mugabe dominated the country’s political scene for almost four decades after independence from Britain in 1980.

Once the bread basket of the region, since 2000 Zimbabwe has struggled to feed its own people due to severe droughts and the effects of a land reform programme that saw white-owned farms redistributed to landless Zimbabweans with sharp falls in production.

The fall of Robert Mugabe in 2017 freed up politics and the media, but the country remains cash-strapped and impoverished.

Emmerson Mnangagwa became president in November 2017 following a dramatic week in which the military took charge and Robert Mugabe resigned after 37 years in office.

After serving out Mr Mugabe’s term, Mr Mnangagwa was narrowly re-elected as president in a July 2018 election. The result was questioned by his closest opponent, MDC Alliance candidate Nelson Chamisa.

Known as “the crocodile” because of his political cunning, he was associated with some of worst atrocities committed under the ruling Zanu-PF party.

Since his election as president, he has pledged open government and a programme to stabilise the ruined economy and boost foreign investment.

All broadcasters in Zimbabwe, and many of the main newspapers, toe the government line.

Some key events in Zimbabwe’s history:

1200-1600 – Era of the Monomotapa Empire, noted for international trade, gold mining and the construction of Great Zimbabwe, now a World Heritage site.

1983-87 – Gukurahundi campaign, in which 20,000 are thought to have been killed in Matabeleland by Mugabe’s Fifth Brigade. The violence ends following a unity accord, when the Zapu party is absorbed into the renamed governing Zanu-PF party.

2008 – Opposition leader Morgan Tsvangirai beats Mugabe in the presidential election but is forced to withdraw from a run-off after his supporters become the target of increased violence.

2017 November – Mugabe resigns after 37 years in power. He is succeeded by Emmerson Mnangagwa.