For a majority of visitors from across New York and the world, Central Park is memorable for what they find at the southern end. That’s where the zoo is. And the carousel. And the pond where hobbyists launch their radio-guided sailboats. And the lake, where couples launch themselves in rowboats.

The southern part of the park is surrounded by some of the most affluent neighborhoods in the country and is in the shadow of “Billionaires’ Row,” where new condominium towers are stratospheric in height and price.

The northern end of the park is a different story. It is surrounded by less affluent blocks filled with largely African-American and Latino residents, has fewer must-see gems and draws significantly fewer visitors and far less attention.

That is about to change. The nonprofit group that manages Central Park is planning the largest project it has undertaken in its nearly 40 years: a $110 million investment in the mostly forgotten northern corner, which may not be on many tourists’ itineraries but which is a vital backyard to surrounding blocks where green space is scarce.

The main piece will be replacing the aging, 1960s-vintage Lasker Pool and skating rink, just past the Harlem Meer, the lake created by Frederick Law Olmsted and Calvert Vaux in the mid-19th century.

The project has resurrected questions about “park equity” and long-running criticism from advocates who say that as money continues to pour into New York’s signature parks, smaller and out-of-the-way green spaces in modest neighborhoods remain neglected.

In this case, another big pot of money is being spent on Central Park, but it is being directed to a sometimes overlooked part of the park.

Mayor Bill de Blasio, who called for improving parks in poor neighborhoods when he ran for office in 2013, announced a parks equity plan the following year. It has spent $318 million of city money on 67 parks in low-income areas that had not seen investment — major repairs or improvements — in more than 20 years.

The Central Park Conservancy, the group that manages the park, argues that the $85 million it spends on the park every year frees up that much money for the city’s Department of Parks and Recreation to spend on other parks.

“The whole premise of the park is about equity,” Elizabeth W. Smith, the group’s president and chief executive, said. “It was to be a reprieve for every person to connect with nature, especially those who are least able to leave the city.” 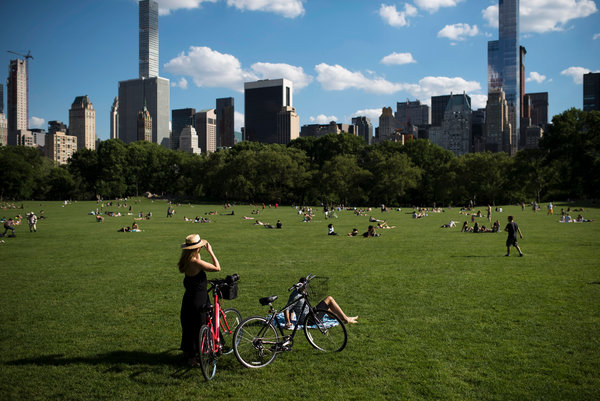 She said that when the group was formed — in 1980, after the park’s deterioration in the 1960s and ’70s as the city declined — work to repair and restore the northern part of the park “started immediately thereafter, in effect to give the message that we were going to restore the whole park.” The ravine, not far from the pool and the rink, and the North Meadow were restored relatively recently.

The conservancy’s model, which includes raising money from donors large and small, has been followed by other park groups like the Prospect Park Alliance in Brooklyn and the Alliance for Flushing Meadows Corona Park in Queens.

Some 42 million people visit Central Park every year. Statistics on who uses the Lasker Rink and Pool indicate that it brings people primarily from nearby neighborhoods.

About 45 percent of the people who use the pool come from central and East Harlem and Manhattan Valley, and 26 percent come from Upper Manhattan and the Bronx. Another 16 percent live elsewhere in the city. The rest are visiting New York.

Councilman Mark Levine, who represents a portion of Upper Manhattan that includes some neighborhoods around the park, called the plan “one of the most important park equity projects” on the drawing board.

“You have a low-income community of color north of the park,” he said. “Historically, the wealthier neighborhoods are in the southern part of the park and that’s where the money has gone. This rights that wrong in a really dramatic way.”

Lynn B. Kelly, the executive director of the advocacy group New Yorkers for Parks, cheered the plan, noting that the area north of the park and across 110th Street is in the City Council district that has the least parkland of any district in the city. But it has the most residents within walking distance of a park.

“To get a brand-new, state-of-the-art facility is incredibly meaningful,” she said.

Robert DeCandido, who as “Birding Bob” leads birding expeditions in Central Park and conducts scientific research there, said use of the north end “has grown exponentially over the last 30 years as I’ve watched it,” and not just among birders.

Dr. DeCandido said he was concerned that changes could draw even more people, which could affect the ambience. That, in turn, could make the area “less good for birding.”

The project is being coordinated by the conservancy, which has raised nearly $1 billion since it started managing the park.

Ms. Smith, the conservancy president, said the project would not only be the largest that the group had undertaken but also the most complicated. Until now, the group’s most expensive venture was the $28 million restoration of the Lake, the biggest of the park’s naturalistic water bodies other than the reservoir, from 2007 to 2009.

For the work in the northern end of the park, the city has budgeted $50 million of the $110 million total, and the conservancy has already raised $100 million. It plans to apply the additional $40 million to an operating fund that will cover year-round programs that have not been offered there before.

The existing pool and rink have been open only about nine months a year. Some 220,000 people swim or skate there every year.

The pool is operated by the parks department in the summer. The Trump Organization has had the concession to run the skating rink for 32 years; it also operates the Wollman Rink at the other end of the park. The company’s contract runs through 2021, the year construction is set to begin.

If the project is completed on schedule, the new pool will be ready for swimmers in spring 2024 and the rink for skaters that fall. They will do their figure 8s on sheets of artificial ice laid over the pool, not on water chilled with refrigerant, as they do now.

Ms. Smith said the project dated to 2015, when “the city asked if we wanted to patch and repair” the Lasker complex.

“We said, ‘It’s beyond repair, but if you want us to take some time to re-envision it, we’d do that,’” she recalled, noting that the mechanical systems in the pool have outlived their useful life.

The plan also calls for rerouting a stream that courses through the area and has been diverted underground through a culvert since the 1960s. Skaters will also be able to twirl on a new boardwalk along the Harlem Meer.

Getting rid of the existing Lasker complex will mean dismantling its unsightly above-ground base, a fortresslike structure that walls off perhaps the most inviting way into the park south of 110th Street.

“It stands in direct opposition to what the point of the park was as a reprieve in the city,” said Christopher J. Nolan the conservancy’s chief landscape architect and the Central Park administrator. “It does not say ‘Welcome.’”

James Barron is a Metro reporter and columnist. He is the author of the books “Piano: The Making of a Steinway Concert Grand” and “The One-Cent Magenta” and the editor of “The New York Times Book of New York.”

Man becomes ‘first person in the world’ to ‘die from vaping’