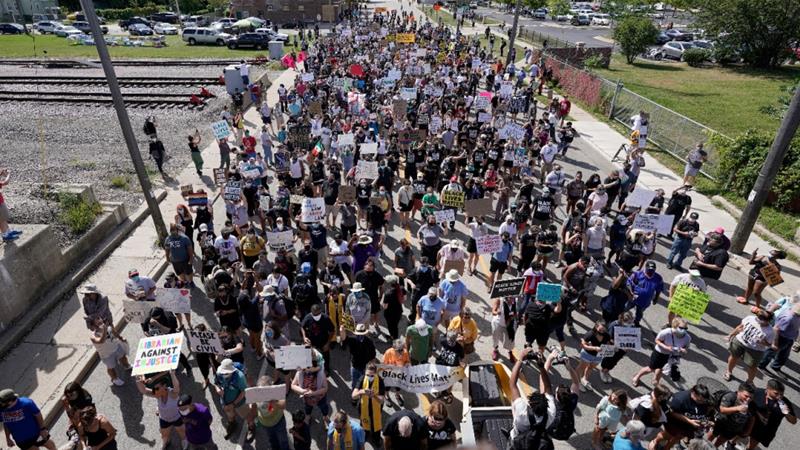 More than a thousand people have taken part in a Kenosha rally to protest against police violence, nearly a week after a police officer shot Jacob Blake in the back seven times, leaving the 29-year-old Black man paralysed from the waist down.

Marchers on Saturday chanted “No justice, no peace!” as the march began and “Seven bullets, seven days” – a reference to the number of times Blake was shot on Sunday.

Those leading the march carried a banner reading “Justice for Jacob” as they made their way towards the Kenosha County Courthouse, where several speakers railed against racial injustice and urged people to vote for change in November.

Blake Sr asked members of the crowd to raise their fists in the air with him.

“We are not going to stop going in the right direction. We’re going to the top … we’re gonna make legislation happen because that’s the only thing that they recognise,” he said.

He also urged protesters to refrain from the looting and vandalism that he said detracted from the push for progress.

“Good people of this city understand. If we tear it up we have nothing,” he told a gathering at a park that was the hub of protests in support of his son, Jacob Blake Jr. “Stop it. Show ’em for one night, we don’t have to tear up nothing.

Kenosha Police Officer Rusten Sheskey and two other officers were responding to a domestic abuse call on Sunday when Sheskey shot Blake seven times in the back. Blake is recovering in a Milwaukee hospital.

The shooting, which was captured on mobile-phone video, sparked new protests against racial injustice and police brutality, just three months after the death of George Floyd in Minneapolis police custody touched off months of nationwide demonstrations.

Protesters have marched on Kenosha’s streets every night since the shooting, with protests at times devolving into unrest that damaged buildings and vehicles.

In the mobile-phone footage recorded by a bystander, Blake walks from the sidewalk around the front of an SUV to his driver-side door as officers follow him with their guns drawn and shout at him.

As Blake opens the door and leans into the SUV, an officer grabs his shirt from behind and opens fire. Three of Blake’s children were in the vehicle.

The man who recorded the video, 22-year-old Raysean White, said he heard police yell at Blake, “Drop the knife! Drop the knife!” before gunfire erupted.

White said he did not see a knife in Blake’s hands.

Blake had been handcuffed to a hospital bed after the shooting, which authorities said was the result of an outstanding arrest warrant, until Friday, when the warrant was vacated, one of his lawyers, Pat Cafferty, told Reuters News Agency.

The warrant was based on a criminal complaint filed against Blake in July, based on statements made by his ex-girlfriend, the mother of three of his children, that was released to Reuters on Friday.

The woman told police Blake broke into her home on May 3 and sexually assaulted her before stealing her truck and debit card.

El Paso shooting to be probed as 'domestic terrorism'

Swami Agnivesh, Crusader Against Labor Abuses in India, Dies at 81
We and our partners use cookies on this site to improve our service, perform analytics, personalize advertising, measure advertising performance, and remember website preferences.Ok