Home » Americas » A 911 Call, an Unarmed Woman and a Single Shot: The Mystery of a Police Shooting

MINNEAPOLIS — Their lives intersected only briefly at the end of a dark alley: a meditation coach clutching a glittery iPhone and a Minneapolis police officer sitting in the passenger seat of a black-and-white Ford Explorer.

The meditation coach, Justine Ruszczyk, who had spent most of her life in Australia, was unarmed and barefoot, wearing pajama pants and a pink T-shirt with the image of a koala. She had heard someone screaming and was nervous enough to have called 911 twice.

The policeman, Mohamed Noor, whose arrival as his precinct’s first Somali-American officer had been celebrated months earlier by the mayor, answered the call. He didn’t find anyone yelling, and told dispatchers that everything was fine.

But a few seconds later, just before midnight, Ms. Ruszczyk was dying on the ground, a single bullet from the officer’s service weapon lodged by her spine, her body sprawled beside the police car.

The death of Ms. Ruszczyk on a July night in 2017 shook Minneapolis — protesters marched, the police chief was fired, the mayor was soon voted out — and renewed debates about body cameras and when police officers use force. It also led to a persistent question that still haunts Ms. Ruszczyk’s family and the city: What happened?

After nearly two years, many details of the shooting remain a mystery. There is no audio recording. No video. And Officer Noor, who is standing trial this month on murder and manslaughter charges, has never given a public account of his actions. Amid the uncertainty, dueling narratives have emerged, along with questions of equity and fears that the truth might never be known. 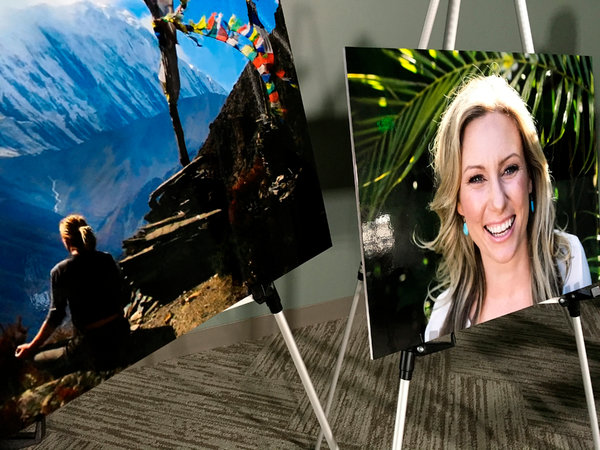 A voice in the alley

Ms. Ruszczyk was home by herself on a Saturday night when she heard a noise coming from behind her house. It sounded like a woman in distress. “I’m not sure if she’s having sex or being raped,” Ms. Ruszczyk told a police dispatcher, adding that she thought she had just heard the woman yell out: “Help!”

The noise was out of place in the Fulton neighborhood, an affluent, low-crime area near the southwestern edge of Minneapolis. Ms. Ruszczyk, 40, had moved there from Australia a couple of years earlier to live with her fiancé, Don Damond, who was away that night on a business trip.

Ms. Ruszczyk, who was a dual citizen of Australia and the United States, had thrived in Minnesota, where she sometimes went by the name Justine Damond. She helped find homes for unwanted pets. Her life-coaching and meditation instruction business had grown. And her wedding in Hawaii was just weeks away, close enough that her dress was purchased and her hotel was booked.

All through that day, July 15, she and Mr. Damond exchanged texts and calls while he was in Las Vegas for work, swapping emojis and complaining about the summer heat. “Night XO!” Mr. Damond texted her just after 10 p.m. “I love you,” she replied.

More than an hour later, past the time she was usually asleep, Ms. Ruszczyk called her fiancé back. When he did not answer, she called back twice more. She told him about the strange noises in the alley. They agreed that she should dial 911.

It was a quiet night in the Fifth Precinct, and Officer Noor and his partner, Officer Matthew Harrity, were about two-thirds of the way through their shift.

After a series of unremarkable assignments and a quick dinner break, dispatchers sent them to the alley behind Washburn Avenue South for what was deemed a relatively low-priority call: “unknown trouble: female screaming.”

For Officer Noor, who is married and has a child, policing was a third career. After graduating from college and working as a hotel manager, then a health benefits analyst, he entered the Minneapolis police academy. He was sworn in as an officer in 2015, on his 30th birthday.

Officer Noor, whose family fled Somalia’s civil war when he was just a few years old, had been celebrated as a potential bridge between the Police Department and the large East African population in Minneapolis. He was part of both groups — a refugee who moved to Minneapolis, became a United States citizen and chose public service. Betsy Hodges, the mayor at the time, called his hiring “a wonderful sign.”

At the entrance to the alley, Officers Noor and Harrity flipped off the headlights on their cruiser and rolled down their windows. Neither officer turned on his body camera. They crept forward, scanning the alley with a spotlight, hearing little more than the whining of a dog.

Officer Noor entered “Code Four” into the cruiser’s computer, meaning the scene was safe. They were about to leave.

Back inside the house, Ms. Ruszczyk spoke on the phone with Mr. Damond as she waited for officers to arrive. Their conversation ended abruptly: “She said, ‘O.K., the police are here,’” Mr. Damond recalled.

What happened next remains a murky combination of settled fact, competing claims and unexplained mystery. Had Ms. Ruszczyk run outside to flag the officers down and startled them? Had she knocked on the back of the car to stop them from driving off? Had the officers mistaken the cellphone she was holding for a weapon?

One thing was certain: Officer Noor then fired a bullet in front of his partner, through the rolled-down driver’s window of the Explorer, and into Ms. Ruszczyk’s chest.

Officer Harrity, who did not fire his gun and is not charged with a crime, has said he heard a loud noise and sensed a figure approaching the cruiser on his side of the car. “We both got spooked,” he told a supervisor.

Officer Noor, who has since been fired by the Police Department, has never spoken with investigators about what happened or why he pulled the trigger. His silence is a rarity: Police officers involved in shootings, including the relatively few who are ultimately charged with crimes, almost always tell their account of what happened to their police departments.

The uncertainty has left people reaching their own conclusions, often disparate ones that have created new rifts on top of old ones. In Australia, where gun violence is comparatively rare, the case stirred outrage. In the tree-lined Fulton neighborhood of Minneapolis, it remains a source of anger.

“I can’t imagine what Justine was doing or would have done that would cause Officer Noor to go from zero to shoot in such a short period of time,” said Todd Schuman, who lives about a block from Ms. Ruszczyk’s home, and who is part of an activist group that pushed for charges against the now former officer.

But others said they believed the charges in the case of Ms. Ruszczyk, who was white, revealed a double standard when it comes to such prosecutions.

“I do not believe that if the victim had been Somali or a person of color, that this officer would have been charged,” said Nekima Levy Armstrong, a civil rights lawyer who used to lead the Minneapolis N.A.A.C.P., and who protested the police shootings of Jamar Clark and Philando Castile, both of whom were black.

Omar Jamal, a consultant and activist, said there was a widespread sense among Somali-Americans in Minnesota that Ms. Ruszczyk’s death was a tragedy, but that this officer was being treated differently than a white officer would.

“There’s a feeling that they threw the book at him hoping that something would stick,” Mr. Jamal said. “They were surprised that he was even charged with a crime.”

Uncertain is whether former Officer Noor, 33, will take the stand and tell his side of the story during his trial, which is expected to go on for days.

On Tuesday, a glimpse of his account emerged in the cramped courtroom. In an opening statement, Peter Wold, one of his lawyers, told jurors that Officer Noor heard a bang and saw Officer Harrity grasping for his gun, in terror, just before the shooting.

“Noor drew his gun to protect his partner and himself,” Mr. Wold told jurors.

Officer Noor quickly fired. Mr. Wold said his client acted reasonably after being startled and seeing his partner panic. Mr. Wold alluded to other instances of police officers being called to secluded areas, finding nothing amiss and being attacked.

“It was a perfect storm with tragic consequences” but “not a crime,” said Mr. Wold, who acknowledged that Ms. Ruszczyk had in fact posed no threat.

Prosecutors described the shooting as something else: a murder with no reasonable explanation.

“He fired that shot,” said Patrick Lofton, a prosecutor, “without saying a word.”