Home » Americas » A Brief History of 2020 in California, in Photos 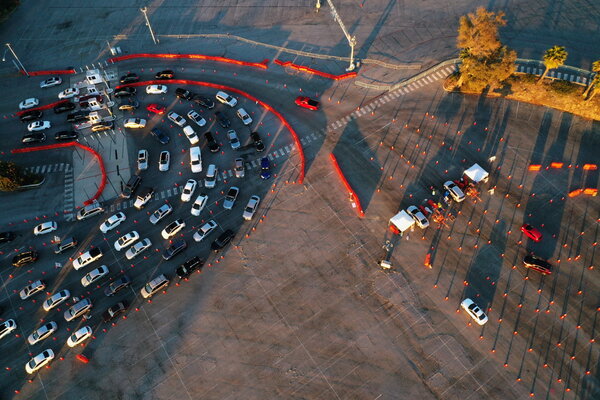 One of the stranger aspects of 2020 has been the way the pandemic has made time feel more elastic. Months passed in what felt like days. Days felt like eternities.

But we made it. Tomorrow will, in fact, be a new year. Here’s a short timeline of 2020 in California to remind you of how far we’ve come:

Jan. 26: Kobe Bryant, the Lakers legend, dies in a helicopter crash, along with his 13-year-old daughter and seven others. His death is shocking, and spurs an outpouring of grief in Los Angeles and around the world.

Feb. 6: Patricia Dowd, a 57-year-old auditor at a Silicon Valley semiconductor manufacturer dies in her kitchen in San Jose. Months later, in April, it will be found that she died of the coronavirus, in what was then the first known case of community transmission, hinting at how widely the virus had spread undetected in the United States.

March 19: Gov. Gavin Newsom orders Californians — all 40 million of us — to shelter in place. It is the most drastic measure any governor takes at the time to control the virus.

May 31: After protests erupted around the country following the killing of George Floyd, National Guard troops patrol the streets of Los Angeles for the first time since 1992. Even though Mayor Eric Garcetti at first said he wouldn’t call in the National Guard to respond to demonstrations, he reversed course.

Aug. 16: At 3:41 p.m., a temperature of 130 degrees Fahrenheit is recorded in Death Valley. It’s the hottest temperature ever recorded on Earth.

Sept. 9: Fires burn across Northern California, part of what experts will describe as the worst fire season in the state’s history. Residents of the Bay Area wake up to eerie orange skies, the sun blotted out by smoke.

Dec. 22: Alex Padilla, California’s secretary of state, is chosen to succeed Ms. Harris. He will be the state’s first Latino senator.

Stay caught up over the long weekend

The governor on Wednesday unveiled a $2 billion plan to reopen schools for in-person learning in February. [The New York Times]

Read about the state’s latest restrictions and guidelines. [CA.gov]

A more contagious variant of the coronavirus that has been spreading through Britain has been discovered in San Diego County. [The New York Times]

Track coronavirus cases, deaths and hospitalizations across the state. [The New York Times]

Find out where the state is setting up alternate care sites. [CA.gov]

Read about the vaccine rollout. [The New York Times]

Learn about what may be in the stimulus deal for you. [The New York Times]

Figure out what to do at home. [The New York Times]

I’ll be on “vacation” next week — i.e., sitting on my couch, avoiding computer screens and going for long walks around my neighborhood — but you’ll be in capable hands with my colleagues. Wishing you and your loved ones a safe and happy new year.

We’ll be off tomorrow for the holiday.