In the weeks following the attack on the Capitol, many Americans have argued over whether the violence was a singular event or an outcome of deeper forces. Voters, Congress and a former president are clashing over who is to blame.

To Kelly J. Baker, a writer and public scholar of religion and racial hatred, the attack felt familiar, and it made her nervous. Many rioters, a largely white group, were motivated by religious fervor and saw themselves as participants in a kind of holy war. Some brought Confederate flags, others crosses. Some who invoked the name of Jesus were members of far-right groups like the Proud Boys, whose participants have espoused misogynistic and anti-immigrant views. Some were motivated by conspiracy theories and QAnon falsehoods as well as their conservative Christian faith.

In many ways it resembled the culture of the Ku Klux Klan in the 1920s, and the group’s march on Washington in 1925, said Dr. Baker, who previously was a religious studies lecturer at the University of Tennessee. Many Americans associate the K.K.K. with white hoods, burning crosses and anti-Black racism but are less familiar with its white Protestant ambitions and antipathy toward Catholics and Jews. Dr. Baker explores that history in her book “Gospel According to the Klan: The KKK’s Appeal to Protestant America, 1915-1930,” published by the University Press of Kansas in 2011.

In a conversation with The New York Times that has been edited for length, Dr. Baker reflected on how white Protestant Christianity and nationalism have long been interwoven — even a mainstream movement — and how many white churches today have yet to reckon with white supremacy.

I thought I’d start with a blunt question. Are connections between white Christianity and extremism new?

No. White Christianity and this white supremacist Trump extremism are definitely not a new combination. I’d push back a little bit about the language of extremism to say that some of this stuff has been remarkably mainstream in American history. I just think that what we’re seeing right now is a dramatic form of it.

What did the attack on the Capitol remind you of historically?

It reminds me of some of the actions of the 1920s Klan, where they are marching on Washington in hoods and robes and carrying flags and crosses to show their dominance and presence in American life.

This was the largest order of the Klan in American history, millions of members in all 48 continental states. Usually the estimates are four to six million. Folks were bankers and dentists and lawyers, pastors and politicians. This involved both white men and women. They stood for, explicitly, white supremacy and white Protestantism. Arguably, it is an evangelical movement too. For membership you were supposed to be a white Christian. You had to be supportive of nationalism and patriotism. They actively encouraged members to go to church. Their language was definitely influenced by evangelicalism, the way they talk about Jesus Christ as their Lord and Savior. 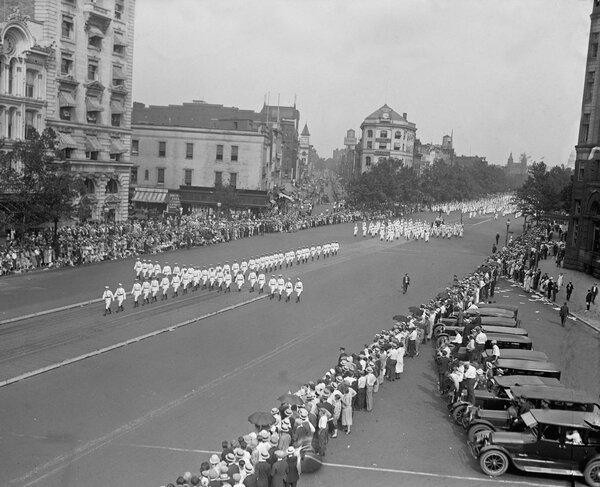 At the time, what was going on with white Christians who were not members?

The Klan was kind of a dramatic example of what a lot of other white people would understand: the importance of Christianity, patriotism, that there was tacit agreement about white supremacy.

There are people that are counteracting these white people that are doing this, but white supremacy wasn’t a controversial topic. The Klan was really upfront and honest about using this term. So a lot of other white Christians might have the same beliefs that they did, but the Klan took it up to 11. These are folks who were picking up the hood and robe to say that America needs to be saved, from immigrants, from people of color.

Did this combination start in the 1920s? Where does it start?

Arguably we can talk about how the combination of Christianity and white supremacy goes to the American founding, with early folks like Puritans showing up and claiming they’re the nation upon a hill and that this is now their land and they have dominion over it. It’s not like we can say that the Klan came from the Puritans. But a variety of different movements in different time periods pick up the same ideas and rhetoric and practices.

What are you observing about this current period of extremism and Christianity. How does it compare to the waves before?

As a historian, sometimes you think, “I don’t know if I can take this moment in history and bring it to the present.” But you can definitely find that if you look at a Klan newspaper from the 1920s that there was similar language about God and there’s similar language about the threat to the nation, from immigrants or Catholics or Jews. It just looked so familiar.

Some of the differences are kind of interesting. Klansmen went around with hoods and robes, so they are not sharing their identity. One of the interesting things to me about this movement now is the willingness of people to be so public about their beliefs. I think they’ve been emboldened by Trump’s behavior.

That feels a little different to me from the more polished version that the 1920s Klan wanted to have, where they’re very careful about their rhetoric, and very thoughtful about how they presented their Christianity, and were very much into having a smooth moving P.R. machine to make them look respectable. I have a hard time imagining a Klan riot on the Capitol.

The Klan was not as apocalyptic as some of the current folks are, you know, where they are thinking about the world ending.

What do you make of the conservative Christians who condemn the violence at the Capitol?

It is interesting that there are conservative Christians who support Trump but say the violence is a step too far. I think that is important. But I have this kind of inkling that that means they’re OK with everything else. Like, the violence is a step too far, but is the white supremacy? Is the anti-immigrant impulse? Are they also convinced that something happened with the election and Trump should have remained president?

Part of the downfall of the 1920s Klan is that there were Klan leaders that pushed too far. There were a couple of cases involving Klansmen that involved a whole bunch of violence. So people started defecting because they don’t want to be associated. But I think the important thing about that is that Klansmen and Klanswomen were on board with exclusion. They’re on board with anti-immigrant sentiment. They are totally there for white supremacy. It’s just that when that violence reached a particular moment, they felt like they had to step back. And that seems similar to me here.

We have also seen a lot of anti-Semitism among the Trump extremists. How does that fit historically with white Christians?

Hamilton student allegedly followed by man twice in as many weeks

US expresses 'serious concerns' about Jerusalem clashes, evictions of Palestinians