Home » Americas » A Child Has Monkeypox in New York City, but the Epidemic May Be Waning 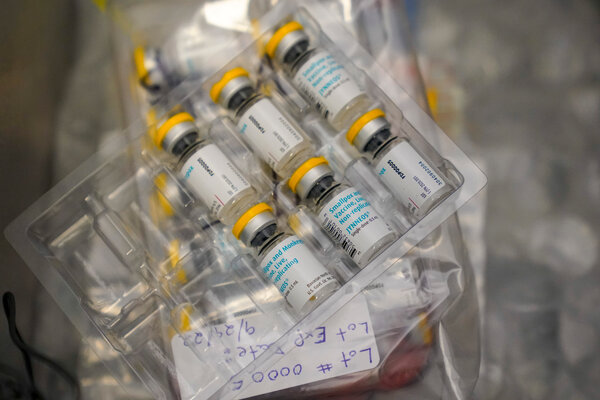 By Joseph Goldstein and Noah Weiland

Health officials said on Thursday that a child had been infected with monkeypox in New York City, the city’s first known pediatric case.

In the more than three months that monkeypox has been spreading in New York City, the virus has been diagnosed in nearly 3,000 adults, almost all men. The child is a “household contact” of an adult who had also been infected with monkeypox, the officials at the city health department said. They declined to provide more details.

“There is a juvenile case of MPV (or monkeypox) in New York City,” the city’s health commissioner, Dr. Ashwin Vasan, said in a written statement. “While we understand the concerns of families, we also know that the overall risk of exposure for children in the city remains very low.”

In the present outbreak, monkeypox has been spreading mainly through sexual contact between men who have sex with men, epidemiologists say.

The virus spreads through direct contact with the rash or scab of someone sickened by the virus, but can also spread through respiratory droplets and through contact with objects such as bedsheets or clothing used by someone with monkeypox.

What is monkeypox? Monkeypox is a virus similar to smallpox, but symptoms are less severe. It was discovered in 1958, after outbreaks occurred in monkeys kept for research. The virus was primarily found in parts of Central and West Africa, but recently it has spread to dozens of countries and infected tens of thousands of people, overwhelmingly men who have sex with men.

What are the symptoms? People who get sick commonly experience a fever, headache, back and muscle aches, swollen lymph nodes, and exhaustion. A few days after getting a fever, most people also develop a rash that starts with flat red marks that become raised and filled with pus. On average, symptoms appear within six to 13 days of exposure, but can take up to three weeks.

How does it spread? The monkeypox virus can spread from person to person through close physical contact with infectious lesions or pustules, by touching items — like clothing or bedding — that previously touched the rash, or via the respiratory droplets produced by coughing or sneezing. Monkeypox can also be transmitted from mother to fetus via the placenta or through close contact during and after birth.

I fear I might have monkeypox. What should I do? There is no way to test for monkeypox if you have only flulike symptoms. But if you start to notice red lesions, you should contact an urgent care center or your primary care physician, who can order a monkeypox test. Isolate at home as soon as you develop symptoms, and wear high-quality masks if you must come in contact with others for medical care.

Who can get the vaccine? Jynneos vaccine is most commonly used to prevent monkeypox infections, and consists of two doses given four weeks apart. It has mostly been offered to health care workers and people who have had a confirmed or suspected exposure due to limited supplies, though new doses should become available in the coming months. A few states, including New York, have also made vaccines available among higher-risk populations.

I live in New York. Can I get the vaccine? Adult men who have sex with men and who have had multiple sexual partners in the past 14 days are eligible for a vaccine in New York City, as well as close contacts of infected people. Eligible people who have conditions that weaken the immune system or who have a history of dermatitis or eczema are also strongly encouraged to get vaccinated. People can book an appointment through this website.

There have been more than 2,888 cases of monkeypox in New York City, with about 50 new cases now turning up each day. Cases in New York City have been decreasing in recent weeks, partly a result of a vaccine campaign that has delivered nearly 70,000 vaccine doses to sexually active gay and bisexual men, as well as transgender and nonbinary individuals.

Doctors and public health experts said that it was possible for children to spread the virus in settings such as school or day care, but that for now children were more likely to pick up monkeypox through an infected family member. The virus is also not as contagious as the coronavirus, for instance.

As of Aug. 21, there were 13 cases of monkeypox in children 10 years old and younger and another four cases in 11- to 15-year-olds nationwide, according to the Centers for Disease Control and Prevention.

The pediatric case in New York was disclosed on the city’s website on Thursday.

The pediatric case came as federal officials projected a sense of optimism about the arc of the outbreak, with Dr. Rochelle P. Walensky, the C.D.C. director, saying that the world “may be turning a corner” in the spread of the disease. The World Health Organization said on Thursday that monkeypox cases globally dropped 21 percent last week.

“I want to be cautiously optimistic,” Dr. Walensky said at a White House news conference, citing “downward trends” in cases in New York, San Francisco and Chicago. “Week over week, our numbers are still increasing. The rate of rise is lower. But we are still seeing increases. And we are of course a very diverse country, and things are not even across the country.”

Runaway barges in Coal Harbour cause over $1M in damage