Home » Americas » A defense lawyer and the judge suggest a congresswoman’s comments could offer grounds for appeal. 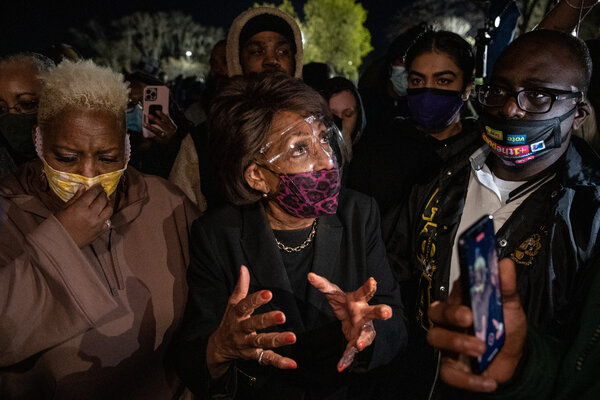 Following closing arguments on Monday, both Derek Chauvin’s lawyer and Judge Peter A. Cahill suggested that a Democratic congresswoman’s comments about racial justice protesters, suggesting they should “get more confrontational” if the jury doesn’t return a guilty verdict, could affect the outcome of the former officer’s trial.

Eric J. Nelson, Mr. Chauvin’s lawyer, argued that Representative Maxine Waters, Democrat of California, had interfered with “the sanctity of the jury process” when she told reporters in Brooklyn Center, Minn., on Saturday night that demonstrators would need to “stay on the street” and “get more active” if Mr. Chauvin was acquitted.

“An elected official, a United States congressperson, was making what I interpreted to be — what I think are reasonably interpreted to be — threats against the sanctity of the jury process,” Mr. Nelson said, calling for a mistrial because of Ms. Waters’s remarks.

Judge Cahill dismissed his motion, but said that Ms. Waters may have inadvertently handed the defense a gift. “I’ll give you that Congresswoman Waters may have given you something on appeal that may result in this whole trial being overturned,” he said.

Still, the judge, who ended every day of testimony during the trial by telling jurors, “Have a good night and don’t watch the news,” added that he believes the jurors have been following those instructions and would not be directly exposed to Ms. Waters’s comments. “A congresswoman’s opinion really doesn’t matter a whole lot,” he added.

Ms. Waters’s unusual cameo at the trial came as Republicans in Washington were seeking to capitalize on her comments, accusing her of inciting violence — a similar charge to the one leveled against former President Donald J. Trump in his impeachment trial in February — and clamoring for Democratic congressional leaders to punish her.

Ms. Waters, the chairwoman of the Financial Services Committee and a frequent target of rage from the right, stopped on Saturday to meet with demonstrators protesting police brutality against the police killing of Daunte Wright.

Representative Kevin McCarthy, Republican of California and the minority leader, said that he would introduce a resolution to censure the congresswoman if Democratic leaders refused to. The reaction was striking, after Mr. McCarthy declined earlier this year to take any action against Representative Marjorie Taylor Greene, the Georgia Republican who in the past had endorsed assassinating Speaker Nancy Pelosi.

Ms. Pelosi defended Ms. Waters on Monday, telling reporters that her comments had nothing to do with inciting violence.

“Maxine talked about confrontation in the manner of the civil rights movement,” Ms. Pelosi said. “No, I don’t think she should apologize.”

Republicans have invoked the sharp-tongued Ms. Waters in the past to excuse extreme rhetoric within their party. Mr. Trump’s defense team repeatedly played video at his impeachment trial of her and other Democrats speaking in harsh terms, arguing that the former president’s bellicose words were no different than those on the other side.

EXCLUSIVE: Mississauga mom explains why she left her child’s placenta in a park