Home » Americas » A Family of 5 Tried to Flee the 19th Floor. Smoke Overwhelmed Them.

The Dukuray family had left Gambia over a decade ago and settled into a top-floor apartment in the Bronx building that burned on Sunday. 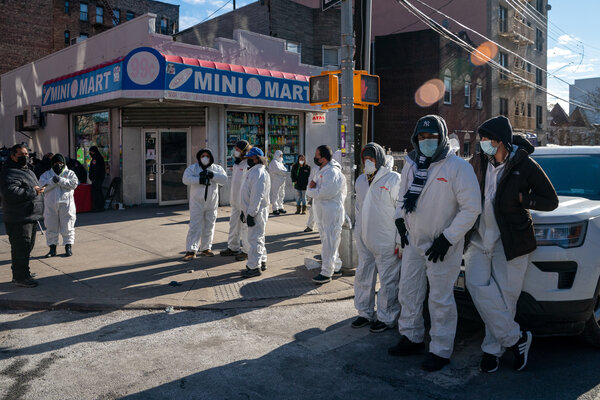 The Dukuray family had followed the same path as many of their neighbors, leaving the small West African nation of Gambia over a decade ago to join a tight-knit immigrant enclave in the Bronx.

Haja, a mother of three, worked as a home health aide, while her husband, Hajie, took shifts at a fried chicken shop, intending to save and send money back to their homeland, said a relative, Hawa Dukuray. The couple’s children were all born in the United States: Mustapha, who was just two weeks shy of his 13th birthday; Mariam, 11, and Fatoumata, who had just turned 5.

The family settled in a 19th-floor apartment on East 181st Street, a towering building filled with other West Africans and near the mosques where many of them worship. During Ramadan nights, the family would gather at the apartment to cook Gambian-style chicken and jollof rice.

They were home on Sunday morning when a malfunctioning space heater in a third-floor apartment sparked a blaze that filled the building with smoke — and prevented their escape.

Hawa Dukuray, 21, would hear later that her relatives had tried to descend from their top-floor apartment as the suffocating plumes rose, blackening the hallways as desperate residents sought to flee. They must have assumed, she reasoned, that it would be safer to get out of the building using the only method available: the internal staircases. The building did not have outdoor fire escapes.

They never made it, part of a death toll that stood at 17, nine adults and eight children and that officials warned could rise. Fifteen people remained in critical condition on Monday evening.

City officials said that the deaths had largely been caused by the smoke, which spread throughout the building after the door to the apartment where the fire started was left open. Another door, leading from the 15th floor to a staircase, was also open, Fire Department Commissioner Daniel A. Nigro said at a news conference outside the building on Monday.

At least 17 people were killed in a fire that began at 11 a.m. on Sunday in an apartment on the building’s third floor. Fire department officials said open doors caused smoked to flood the stairwell, possibly preventing residents from escaping.

Virgin of Guadalupe Is ‘No. 1 Mother’ in Mexico, a Binding Force Across Divides