Innes, a youthful German shepherd, was trying to make his way across a frenetic Manhattan intersection near Central Park and found himself facing down all sorts of projectiles — yellow cabs, bike messengers, pedicabs — as a deafening truck horn blasted and the traffic light changed against him.

But Innes was not negotiating this chaotic scene while out for an afternoon stroll. He was safeguarding his new master, Kathy Faul, 73, a blind woman from Swarthmore, Pa.

Both were relative strangers to New York City, but they had ventured into Manhattan expressly for moments like this, to experience its particular brand of street-level chaos, as the culmination of a thorough course of training by the Seeing Eye, a guide dog school in Morristown, N.J. Founded in 1929, it is the nation’s oldest training school for dogs and one of the largest of its kind. It even holds the trademark for the phrase “seeing eye.”

The school’s training is done in a suburban setting far calmer than Midtown Manhattan, an hour’s drive away. But for its ultimate challenge, and to assess a dog’s focus, trainers take the student-dog pairs into Manhattan as something of a proving ground. 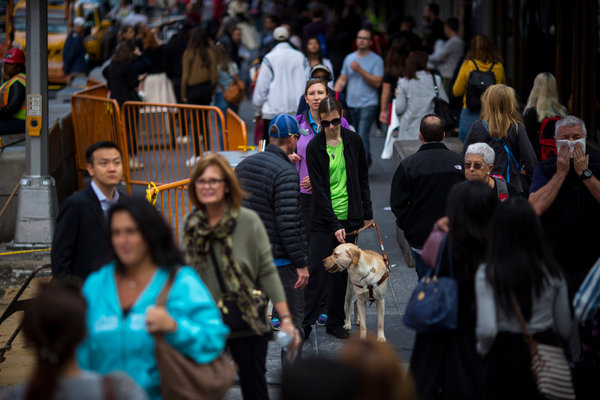 “There’s no more intense place than New York City to train the dogs — it’s the craziest environment they’ve ever been in,” said Brian O’Neal, a Seeing Eye trainer. “At the end of the training, the idea is, ‘O.K., they know the basics. Now can they handle the grind of the city?’ ”

To find out, Ms. Faul and another blind woman, Val Gee, 26, had arrived in a van to experience these extreme urban conditions, along with their dogs.

“I’m half scared, half so excited,” said Ms. Faul, gripping the stiff leather handle strapped to Innes. “But I figure, like the song says, if I can make it here, I can make it anywhere.”

Making it here involves navigating obstacles and potential hazards, from potholes to work zones to throngs of distracted pedestrians — not to mention the traffic madness Ms. Faul was now experiencing, which included a close encounter between Innes and a horse and buggy.

To their credit, Ms. Faul and Innes remained calm. She nudged Innes back on course, so he could lead her to the curb safely.

They had begun the route in a rooftop parking lot above the Port Authority Bus Terminal, the starting point of a loop plotted specifically “to get them the best distractions,” said Ms. Faul’s trainer, Kristen DeMarco.

After squeezing into a packed elevator, they were soon slipping through subway turnstiles and being led by their dogs through crowds of commuters. They braved a packed stairway to the train platform, while being jostled by crowds.

The dogs remained calm on the subway platform, despite the clatter of passing trains and the blare of announcements.

For Ms. Gee, a psychotherapist from Dayton, Ohio, this was only her second time in New York City, after visiting as a 19-year-old when being paired with her first guide dog, which she recently retired.

“This is quite different from Dayton,” said Ms. Gee who, with her instructor, Kristen Oplinger, boarded an uptown C train and sat next to a sleeping passenger, while Ozma curled up under the seat.

At Columbus Circle, they headed up the escalator to the street. The first test was neither traffic- nor pedestrian-related, but rather a tiny dog that was being walked nearby and intrigued Innes.

It would be the first of many tests of the dogs’ concentration. There would also be countless new smells, from well-visited fire hydrants to aromatic street vendors.

The sidewalks themselves were obstacle courses, with open basement doors creating gaping shaftways. There were gridlocked intersections, fluttering pigeons and jackhammers loud enough to interfere with dog-owner communication.

Columbus Circle was flooded with lunchtime crowds. The first challenge was the traffic rotary. The dogs stopped at the curb, as they were trained, and both Ms. Faul and Ms. Gee listened to the flow of traffic, to detect if the cars had stopped for the light. Then each gave her dog a forward command and proceeded to cross.

The dogs receive four months of training at the Seeing Eye, learning to guide around obstacles and obey commands, as well as street-crossing skills, including how to watch for traffic and keep their handlers safe from vehicles that might be turning or running lights.

Officials with the Seeing Eye said they pair roughly 260 dogs each year with blind people living in the United States and Canada. Most live in some urban environment — largely because of public transportation, walkability and other services — and a handful live in New York City.

Dogs who do not prefer an urban setting can be paired with owners who tend not to be city-goers. Owners train alongside their dogs while boarding at the school for several weeks. Their stay culminates with the trip to Manhattan.

While not exactly a test, Manhattan’s conditions present the dogs with intense conditions that can help reveal training aspects to work on.

“It’s a training experience that offers more than anywhere else we can take them,” said Dave Johnson, director of instruction and training at the Seeing Eye. “Almost anything can happen in one day in New York — it’s a culmination of sensory overload, even for humans.”

The dogs partnered with Ms. Faul and Ms. Gee were handling it all pretty well. They wove through pedestrians like a slalom course. Like harried New Yorkers, the dogs seemed stymied by slow-walking tourists. They nudged up to them and waited for a narrow opening to lead their owners past.

“She’s so smooth about it,” said Ms. Gee, who began losing her vision in early childhood because of a genetic disorder.

Ms. Faul said she was happy with Innes’s confidence.

“You need to have that gumption,” said Ms. Faul, a retired computer programmer who lost her sight in a car accident while in college. “When I felt him go through those people, I knew he was a New Yorker.”

Ahead was a hot dog cart whose vendor was playing Middle Eastern music. Ms. Gee avoided the cart but hit her head on a plastic sign that was hanging off it. She circled Ozma back to remind him to see obstacles at eye level.

Guiding Eyes For the Blind, in Yorktown Heights, N.Y., in Westchester County, and the Guide Dog Foundation in Smithtown, N.Y., on Long Island, also train dogs in Manhattan.

Many other schools train dogs in urban environments. But New York stands apart, said Marion Gwizdala, president of the National Association of Guide Dog Users. “Most cities,” he said, “don’t have the hustle and bustle of Midtown Manhattan.”

Even for dogs and owners who do not visit cities, urban training can help prepare them for chaotic situations, such as shopping malls or carnivals, he added.

As Ms. Faul and Ms. Gee headed along Seventh Avenue, the dogs guided them around scaffolding supports that partially blocked sidewalks and around a work zone. The dogs looped around a Coca-Cola truck blocking a crosswalk and later avoided a yellow cab that swooped around a corner toward them.

There were moments for instruction, too, as when Innes suddenly made a sharp right — toward the open door of a perfume store. The dogs would soon get used to such distractions, Ms. DeMarco said. For now, Ms. Faul pulled him back on course.

As visual as Times Square is, with its billboards and swarm of activity, Ms. Faul said that its aural energy was also impressive.

“I feel like I’m in a carnival city,” she said. “All the noise, all the beeps, all the people, the different languages you hear. The noise echoes off the buildings. It’s like being at Mardi Gras. Crowds of people everywhere.”

They walked by the TKTS booth selling theater tickets and headed past Broadway theaters. Ms. Gee praised the way Ozma ignored the blaring sirens and kept her away from creeping tour buses and rumbling dump trucks.

“She seems to focus even better in the chaos,” she said, adding that there was only one problem.

“She’s going to be disappointed when we go home.”

Biden says he'd leave US embassy in Jerusalem if elected