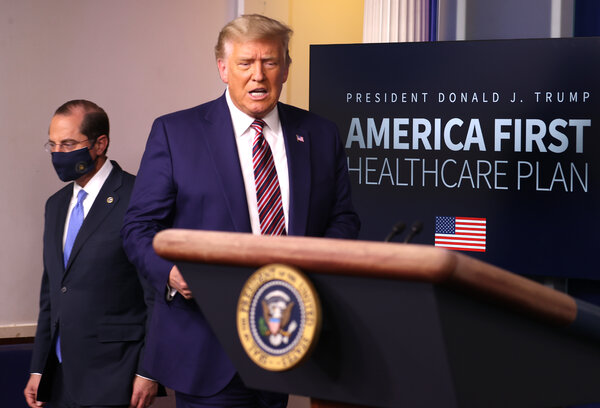 Health officials on Friday finalized a policy that would base the price Medicare pays for certain drugs on the lowest price paid in some other developed nations. It is the most ambitious of several drug-pricing rules issued in the final months of President Trump’s term, but is likely to be vulnerable to legal challenges.

Mr. Trump has spoken for years about the idea, which he calls “most favored nation.” It would guarantee the United States the best price available among a group of developed countries for 50 expensive drugs it buys for Medicare beneficiaries. In a news conference Friday afternoon announcing the rule, he said it would “transform the way the U.S. government pays for drugs to end global freeloading on the backs of American citizens and American patients.”

The idea is anathema to the pharmaceutical industry, which has fought hard against any price controls on its products and has advertised heavily against the policy. And it runs counter to the policy preferences of lawmakers in Mr. Trump’s own party. Just last year, most Republicans on the Senate Finance Committee, which oversees Medicare, voted to prevent the administration from pursuing a weaker version of the same idea.

But Mr. Trump has always been an outlier in his party on drug prices, aligning himself more closely with ideas that are mainstream among Democrats. He campaigned in 2016 on allowing Medicare to negotiate directly with drug companies on prices, an option that Republicans in Congress prohibited when they established Medicare’s prescription drug benefit in 2003.

The policy shares some features with a bill passed by House Democrats last year, which would also tie the prices paid for some drugs to those paid by other nations.

“His proposal is a break from the Republican orthodoxy,” said Rachel Sachs, an associate professor of law at Washington University in St. Louis, who called the regulation “an extremely big deal, rhetorically.” But she, like several drug policy experts, warned that a rushed regulatory process meant the proposal faced a high risk of being overturned in court after the industry inevitably sued.

Mr. Trump on Friday hinted at the possibility the rule may not survive. “I just hope they keep it,” he said. “I hope they have the courage to keep it, because the powerful drug lobby, big pharma is putting pressure on people like you wouldn’t believe.” It was unclear whether Mr. Trump was referring to the courts or the administration of President-elect Joe Biden. (The president at one point baselessly said he had won the election.)

The proposal is possible under a provision of the Affordable Care Act that allows Medicare to test policy ideas that improve patient care and save money. But it is highly unusual because it would be established as a national, mandatory demonstration program. Most such projects have been set up as either voluntary or mandatory for only a random fraction of health providers, in order to study their effects. A few types of safety-net and cancer hospitals are exempted. The demonstration would last seven years, and feature a four-year phase-in of the price changes.

“This absolutely prevents the experiment from yielding results that could be interpreted,” said Dr. Peter Bach, the director of the Center for Health Policy and Outcomes at Memorial Sloan Kettering Cancer Hospital. “They’re not even pretending it’s an experiment.”

Though Mr. Trump described the policy as transformational, it may have very limited impact for most Medicare beneficiaries. The policy applies only to a category of drugs that patients get from doctors in an office or a hospital, not to drugs they buy themselves at the pharmacy counter. While some seniors do end up paying for a share of such drugs, the vast majority have special insurance that protects them from the cost. That means that the savings are likely to benefit the government more than individual patients. It will have no effect on the prices paid by people who get insurance through work or buy their own health plan.

But the plan, as written, would also change how medical providers are paid for administering those drugs, reducing their payment, too. An effort by Obama administration health officials to reduce those payments faced major opposition from the medical industry and was ultimately scuttled.

“America’s hospitals and health systems have very deep concerns about the substance and legality of today’s Most Favored Nation Model interim final rule,” said Tom Nickels, an executive vice president for the American Hospital Association, in a statement.

Mr. Trump announced two other major health policies. One would eliminate the rebates paid by drug companies to middlemen purchasers, a priority of Alex M. Azar II, the secretary of the Department of Health and Human Services. Another would loosen some anti-kickback rules on business relationships between doctors and other businesses, in an effort to improve cooperation between different players in managing patients’ health.

For years, Mr. Azar sought completion of the rebate rule, but faced opposition from the White House, including Joe Grogan, the former head of the Domestic Policy Council, who worked aggressively to kill the policy. Mark Meadows, the White House chief of staff, has worked with Mr. Azar this year to revive it as part of a package of drug pricing initiatives, senior administration officials said.

In a statement, a spokeswoman for PhRMA, the leading trade group for drugmakers, did not say whether the industry would bring lawsuits against the pricing rule. “It defies logic that the administration is blindly proceeding with a ‘most favored nation’ policy that gives foreign governments the upper hand in deciding the value of medicines in the United States,” said Nicole Longo, the group’s director of public affairs, who called the policy “unlawful.”

The statement was more supportive of the rebate rule, which drugmakers have tended to support.

Mr. Trump’s news conference was dotted with grievances against the pharmaceutical industry. He complained that he was the victim of “millions and millions of dollars in ads” targeting his drug pricing initiatives. He said Americans “have been abused by big pharma and their army of lawyers, lobbyists and bought-and-paid-for politicians.” White House officials are still upset about the collapse of an agreement with the pharmaceutical industry this summer to offer discounts to Medicare beneficiaries.

He also accused Pfizer of conspiring to deprive him of news of a successful coronavirus vaccine before the election, saying that his push to lower drug prices had prompted the company to hold off on announcing early clinical trial results.

There is no evidence of such a scheme. Though Pfizer had teased an early readout of data in late October, the company decided against it, waiting to gather a larger sample of Covid-19 cases that would offer a better indication of the vaccine’s effectiveness. Its analysis was announced on Nov. 9.

Miss Subways Is Back. This Year, a New Wave Rocker Takes the Crown.

Trump rose on Forbes richest list as other billionaires slipped