Home » Americas » A Fire, and Then a Deadly Attack in San Jose 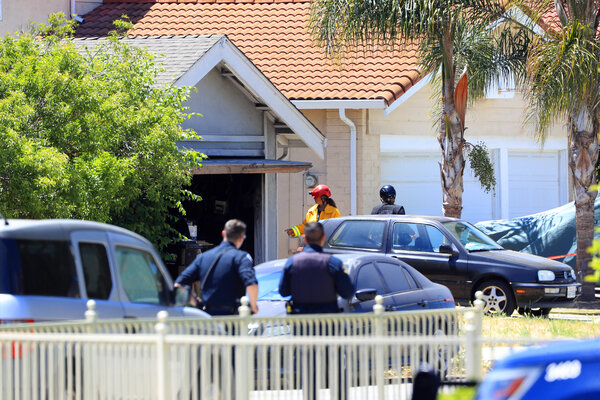 Everything was set for an ordinary day in a suburban corner of southeastern San Jose on Wednesday. Doug Suh had an early golf game scheduled. Andy and Alice Abad were preparing for a morning doctor’s appointment. And Anthony Nguyen was, as always, set for his daily 9:30 a.m. church service.

But by early afternoon, each resident of the Evergreen neighborhood discovered in their own way that something had gone very wrong.

Early on Wednesday, Abad watched from his kitchen as a funnel of smoke and flames poured from a home one block away. Suh got a call from a friend on the golf course about a man who had killed eight workers at the Santa Clara Valley Transportation Authority rail yard. (It would later become nine.) And Nguyen got a similar call from a friend but with a more disturbing detail: “The man who did it was your neighbor,” Nguyen’s friend told him.

By noon, their neighborhood was swarming with multiple fire and police vehicles, federal agents and a boxy blue truck from the San Jose bomb squad. Men with gas masks and oxygen tanks stood amid the flashing lights in the cul-de-sacs of what they all described as a quiet suburban neighborhood that is home largely to Vietnamese and Filipino immigrants.

Investigators on Thursday morning were still piecing together the havoc unleashed the day before.

The suspect in the shooting, Samuel James Cassidy, 57, a maintenance worker who had been with the V.T.A. for at least a decade, lived in a one-story home with white trim and a patchy lawn in the Evergreen neighborhood.

Officials said Wednesday that they believed Cassidy was responsible for both setting his home on fire and then proceeding to shoot his colleagues at his workplace, the railway yard eight miles from where he lived.

Light rail service was shut down. Bomb squads searched for explosives in the area near downtown San Jose. The authorities said they believed the gunman had killed himself. His motive remained unclear.

Suh, who lives across the street from Cassidy, scanned through his security camera footage when he returned home from his golf game. The camera captured Cassidy at 5:40 a.m. loading his white pickup truck with a black bag. He was wearing a uniform with reflective stripes.

Suh said the few times he had conversations with Cassidy over the past few years, he was always wary of him. He said he had a short temper.

But nothing prepared him and his neighbors for the scale of the violence that ravaged the city on Wednesday.

Nguyen, a retired real estate broker who has lived in San Jose for the past four decades, said he was baffled by what had happened.

“Everything has been very perfect,” he said of his neighborhood. “People are nice and quiet here.”

When he saw flashing lights on the corner of his street on Wednesday, he assumed there had been a traffic accident. Then his friend called with the news about the shooting.

“What about all these families that lost sons and fathers?” Nguyen asked in his driveway. “I’m so sorry for them. It’s not right. All these broken hearts.”

President Biden plans to announce that he is nominating Mayor Eric Garcetti of Los Angeles to be his ambassador to India, turning to a longtime political ally for a high-profile diplomatic posting.

As the drought intensifies, the federal government announced that water allocations to cities and farms were being reduced, The Fresno Bee reports.

Gun buying among Californians rose sharply last year. Before the pandemic, California was reporting about 100,000 background checks per month, but last March, that number rose to 164,000, The Sacramento Bee reports.

Politico reports that lawmakers are considering expanding access to the State Capitol on June 15, when California lifts many of its Covid-19 restrictions. The Capitol may reopen at 25 percent capacity.

The city of Compton accused the Los Angeles County Sheriff’s Department of “fraudulent billing.” The city said in a legal claim that the sheriff’s office was routinely charging for patrol work that was not done, The Los Angeles Times reports.

The authorities arrested a suspect who they said may be tied to dozens of BB gun shootings on Southern California freeways. For weeks, about 100 motorists have had their windows shattered or shot out by BB or pellet guns, mostly on the 91 Freeway in Riverside, Orange and Los Angeles Counties, The Daily Breeze reports.

KTLA reports that Disneyland plans to welcome back out-of-state guests on June 15. The theme park in Anaheim reopened to in-state visitors on April 30, at limited capacity.

Lawmakers, oil-industry workers and others pushed back on Wednesday against the state’s plans to phase out California petroleum production by 2045, highlighting the local jobs and tax revenues that will be lost, The Bakersfield Californian reports.

A mountain lion broke a window and prowled around inside a home in the Bay Area city of San Bruno. The homeowner ended up scaring the animal away, The San Francisco Chronicle reports.

Tensions remain high between Houston Astros and Los Angeles Dodgers fans after the Astros’ sign-stealing scheme in 2017. A fight between fans broke out on Wednesday night at Minute Maid Park in Houston, KPRC reports.