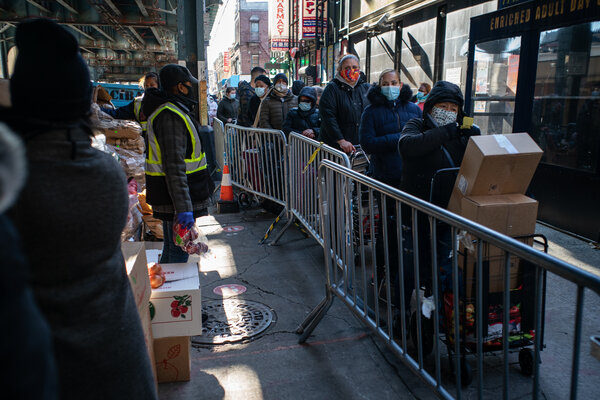 The bad news in the November jobs numbers reported Friday isn’t in the rate of job creation, though that was pretty bad.

Employers added only 245,000 positions last month, and even if you adjust for the one-time effects of temporary census jobs being eliminated, it would take 29 more months to return to February employment levels at that rate of job creation. But at least there is good reason to expect those numbers to improve once coronavirus vaccines are widely available.

The thing that is most worrying is what seems to be happening among the people who have lost their jobs because of the pandemic. The jobs report offers clues that what was once temporary unemployment is becoming more permanent — in ways that, if unchecked, could do long-term damage to millions of families and to the economic potential of the United States.

Although the unemployment rate fell last month, to 6.7 percent from 6.9 percent, it was for the worst of reasons: Many Americans gave up even looking for work. The number of adults not in the labor force — neither working nor actively seeking work — rose by 560,000, as the labor force participation rate dropped by 0.2 percentage points.

The share of prime working-age Americans working — those between 25 and 54 — was unchanged in November at 76 percent and remains far below its 80.5 percent share in February. The number of people who are not in the labor force but say they want a job is 2.2 million higher than it was in February.

A growing share of the unemployed have been out of work for a long time. The number of Americans unemployed for more than 27 weeks rose by 385,000 in November. Since only September, the number of these long-term unemployed is up by a devastating 1.5 million people — a 64 percent increase.

Put those numbers together, and the pattern is clear: Many people who lost jobs in the spring have been without work continuously since then, and some of them have given up looking.

A central lesson of the grinding recovery that followed the 2008-9 recession is that these prolonged periods of unemployment (people actively seeking a job) or nonemployment (not working, and also not looking) have long-term effects.

Even as the economy recovered, people had experienced various forms of damage. Some people’s skills became outdated. But more generally, many people just lost a sense of attachment to the work force. It’s much harder to find a job when you’ve been out of work for years than when you’ve been on a short-term layoff.

And that’s before you get to the more social dimensions of the problem; those out of the work force can become more likely to develop addictions or mental health problems. The nonemployment crisis of the 2010s and the opioid crisis of the 2010s weren’t completely separate.

In that episode, the share of prime-age Americans who were employed did not return to its January 2008 level until August 2019! When economists talk about what a slow, disappointing expansion that was, this is a big part of what they are referring to.

There is a good chance to avoid that fate in the recovery from the pandemic recession. A quick snapback in employment after widespread vaccination is possible in 2021, and it could pull many of those long-term unemployed and nonemployed back into the work force quickly, after only a year or so of detachment from the rhythms of work life.

This is normally the point in analyzing a bad jobs report where one points out silver linings — those little reasons for optimism that are hiding if you know where to look.

This month, they are hard to find.

The data in the new numbers are based on employment levels in the week of Nov. 8-14. Various real-time data sources point to a softening in economic activity since then, as coronavirus infections have risen and weather has turned colder, limiting outdoor dining and retail options. December employment numbers could well be worse.

For a slight hint of optimism, one of the big categories of job loss that dragged down the November numbers will probably reverse. Retailers cut about 35,000 jobs, according to the official numbers, which are adjusted for the typical seasonal patterns. But if you ignore those seasonal adjustments, the sector added 302,000 jobs — stores did do holiday hiring, just less than past experience would have predicted.

The good news, such as it is, is that in January this pattern should reverse itself, creating an apparent employment surge when seasonal adjustments are applied.

In a miserable November for American workers, this is what counts as a cause for optimism: The people who weren’t hired as temporary help at retailers this holiday season won’t lose their jobs in January.

But the real hope for 2021 is that enough of the unemployed and nonemployed Americans can come back to work quickly enough that the long-lasting effects of that last scarring downturn can be prevented.