Home » Americas » ‘A long line of hate’ against Asian-Americans in N.Y.C.

Weather: Mostly sunny, with a strong breeze and a high in the low 40s. It looks like a nice weekend: Sunny and in the mid-50s. 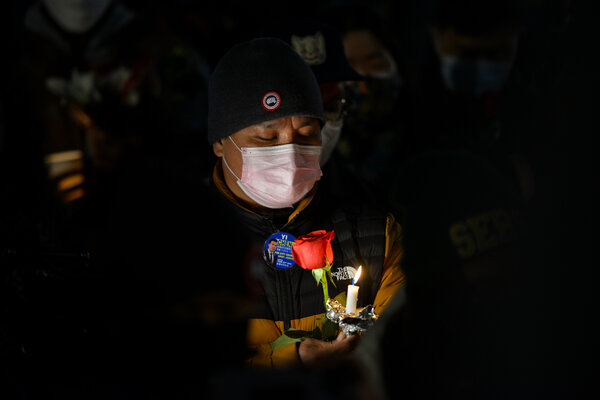 A woman was shoved to the ground outside a bakery in Queens last month. The following week, a man was walking home in Manhattan when a stranger stabbed him in his back.

Both victims were of Asian descent, and each incident was widely seen as another example of racially targeted violence against Asians during the pandemic. But neither attack was charged as a hate crime, fueling outrage and protests.

Those frustrations erupted nationally after a white man was charged with fatally shooting eight people, including six women of Asian descent, at spas in the Atlanta area this week. Investigators said they had not ruled out a racial motive.

“We are so devastated and pained after what happened, knowing it’s a continuation of a long line of hate and violence against the Asian-American community,” said Shekar Krishnan, a Democrat running for City Council who organized a vigil in Queens after the killings.

[Read more about the recent attacks in New York and why hate crime charges are rare.]

My colleague Will Dudding attended the vigil in Jackson Heights this week. Community members spoke through tears as they appealed to end racial violence, in reference to the attacks in Georgia — but also in New York City and across the country.

Among large American cities, New York had the largest increase in reported hate crimes against Asians last year, according to an analysis of police data.

“It has stoked a lot of fear and paranoia,” Jo-Ann Yoo, executive director of the Asian American Federation, told The New York Times last month. “People are not leaving their homes.”

The obstacles to hate crime charges

In New York State, to charge attacks like the stabbing in Manhattan last month as hate crimes, prosecutors would need to show that the victims were targeted because of their race.

But proving anti-Asian bias can be particularly difficult, experts told my colleagues Nicole Hong and Jonah Bromwich. There is no widely recognized symbol of anti-Asian hate comparable to a noose or a swastika, and historically many Asian crime victims in the U.S. have been small-business owners who were robbed, complicating the question of motive.

Many are grappling with the reality that the law is not designed to account for many of the ways in which Asian-Americans experience racism. Many incidents do not lead to arrests or hate crime charges, so the extent to which Asian-Americans are being targeted has been difficult to capture with reliable data.

Battered by Scandal, Cuomo Leans on Black Leaders to Build His Defense

Chasing the Scent of a Brooklyn Fragrance Lover

Prosecutors say a former Long Island Rail Road employee lied about an inspection that led to a derailment two years ago. [Daily News]

Thousands of businesses have closed in New York during the pandemic. Here’s a look at 52 restaurants that did not survive. [Eater New York]

What we’re watching: The Times’s contributing writers Eleanor Randolph and Clyde Haberman discuss the pressure on Gov. Andrew M. Cuomo to resign, and mayoral candidate Eric Adams discusses his agenda on “The New York Times Close Up With Sam Roberts.” The show airs on Friday at 8 p.m., Saturday at 1:30 p.m. and Sunday at 12:30 p.m. [CUNY TV]

And finally: Your virtual social weekend

Although many performance spaces, museums and community centers are closed, people are finding creative ways to connect through virtual events and programs. Here are suggestions for maintaining a New York social life this weekend while keeping a safe distance from other people.

On Friday at 12 p.m., join the artists Tali Weinberg and Jacob Olmedo for a virtual open studio conversation. Participants will learn about their creative practices, preview in-progress work and more.

Performance: The genius of Black women in music

In celebration of Women’s History Month, watch a livestream performance by the jazz vocalist Akua Allrich and her group, The Tribe, on Saturday at 8 p.m. honoring the women who shaped music.

On Sunday at 12 p.m., join a conversation with the creators of “Diža’ No’ole,” a book made to support undocumented Indigenous women in Los Angeles.

Black cowboy hat, long, straight black hair
Tied back with a rawhide
Broad-boned face and a barrel chest
I know he’s Navajo
I’m back home even though I’m
Oglala from South Dakota

At last, a sign
Green, Go, yes, Go
I run to the next street
People are pushing yet
Homesickness propels me
I turn the corner
But he’s gone

Still, I feel less alone in this big city
Crossroads of the World
I feel like a New Yorker

Liberals Envisioned a Multiracial Coalition. Voters of Color Had Other Ideas.