ATLANTA — When Yolanda Latimore, the owner of a Macon, Ga., advertising agency, makes a list of those who showed her how to survive and thrive as a Black woman, she begins with her 91-year-old grandmother, Clarise Bonner, a former sharecropper who lacked a formal education yet ran a small business while also raising a family.

But on Saturday, Ms. Latimore, 46, was making room in her personal pantheon for Kamala Devi Harris, the running mate of President-elect Joseph R. Biden Jr. Soon, Ms. Harris will become the first woman — and the first Black woman — to become vice president of the United States.

At a time when a range of racial and gender barriers have been shattered by earlier trailblazers, Ms. Latimore said that Ms. Harris’s ascension to the highest levels of power was particularly important, giving Black girls everywhere a reminder that anything is possible.

“I know that it won’t solve all problems, but it definitely will raise the spirit and the drive of Black women,” Ms. Latimore said, adding that she was “just so glad to see something like this happen.”

Along with the jubilance and celebrations across the nation on Saturday over the victory of the Biden-Harris ticket, Ms. Harris’s pathbreaking course prompted explosions of joy within explosions — of pride, elation, relief and a sense of hard-fought accomplishment. The sentiment was shared by women generally, and Black women specifically.

“This has been a long time coming — a woman of color, an H.B.C.U. representative,” said Mayor Keisha Lance Bottoms of Atlanta, who has known Ms. Harris for about a decade, referring to historically Black colleges and universities; Ms. Harris graduated from Howard University, perhaps the most vaunted of them.

Ms. Bottoms added that the achievement was “particularly poignant,” coming at the end of a year that has included the continuing coronavirus pandemic, the killing of George Floyd and other Black men and women during encounters with the police, and a national reckoning over systemic racism and police brutality.

“Communities of color have been figuratively and physically under attack,” she said. “I think that representation is what this country needs. It is more important than ever that we have representation at the White House, at the table.”

“It’s pretty incredible,” she said on Saturday. “And I am so excited not just because Kamala Harris is my friend, but because of what she represents for women in general and what this means in terms of our role in politics and how women — especially women of color — are finally being taken seriously.”

The moment was also indelible for those who have known Ms. Harris, 56, for much of her life. Hers is a life that began in the Bay Area, as the child of immigrant academics from India and Jamaica, and included a high school experience in Montreal, Quebec; college amid the fertile Black intellectual loam of Howard, in Washington, D.C.; and a long, complex political career both on the West Coast and in the Senate.

Carole Porter, a close friend who hosted two fund-raisers for Ms. Harris during the primary race last year, lived around the corner from Ms. Harris’s childhood home in Berkeley, Calif. The girls — who first met at the neighborhood bus stop — rode the bus together each morning to a more affluent area. In 1970, Ms. Harris joined the second elementary school class in Berkeley to be desegregated by busing. 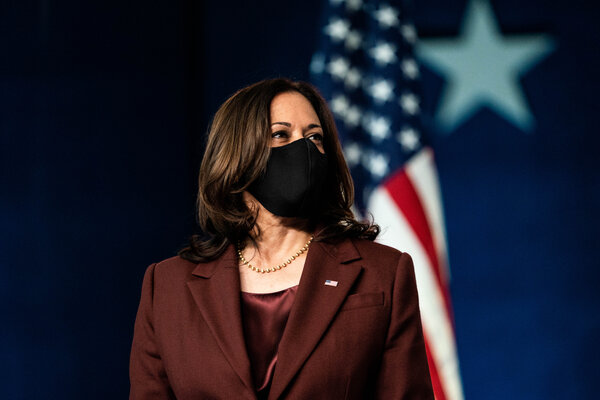 To pass the time, they played games like Miss Mary Mack and cat’s cradle and sang Jackson 5 tunes. “We didn’t know that we were in the middle of this social moment,” said Ms. Porter, who remembered Ms. Harris as studious and disciplined. “We just knew we had to get up really early for school and it was a long way from home.”

By high school, they had lost touch. They later reconnected while Ms. Harris was a student at Hastings College of the Law at the University of California in San Francisco.

Ms. Porter, now 56 and a health care information technology team leader who lives in Richmond, Calif., learned that Ms. Harris had officially become the vice president-elect in a text from a mutual friend. “It’s a wrap,” it read, in part.

“I started to cry — I immediately thought of her mother, Shyamala,” Ms. Porter said, referring to Shyamala Gopalan Harris, an Indian immigrant who died of cancer in 2009. “I thought of the West Berkeley flatlands, this small, immigrant, people of color, redlined neighborhood we grew up in.”

“I thought of Shyamala going to work as a researcher and denied opportunities,” Ms. Porter said, but she “continued to fight.”

“Out of all of that,” Ms. Porter continued, “we all rose, and Kamala rose to become the vice president of the United States. She came from this fertile, activist environment. But the thing I want people to understand is the work it took to be where she is. She went against the tide. She had people who did not want her voice in the room. She had people shutting the door. And look where she is now.”

After the presidential race was called, Carol Moseley Braun, 73, the first African-American woman elected to the U.S. Senate, found herself making a mental list of the Black women who had come before Ms. Harris. They were Black women who conquered firsts: Sojourner Truth, Shirley Chisholm, Yvonne Brathwaite Burke, Barbara Jordan. Then, she began to pray.

“I thanked the Lord for this dream come true,” said Ms. Braun, a Democrat who represented Illinois in the Senate from 1993 to 1999. “I believe Joe Biden is exactly what the country needs to heal, and Kamala as his second-in-command is the exactly the right person to help him. There were so many women who paved the way for this to happen, so many who sacrificed, so many shoulders.”

But after the celebration, she said, Ms. Harris will face the difficult task of reaching across the aisle in a country disrupted, cleaved and often intolerant of the changing America Ms. Harris embodies: She is a daughter of immigrants, she is Black and South Asian, and she is in an interracial marriage. “She checks all these boxes,” Ms. Braun said, and those that want to fan the flames of racism and hate just do not know what to do with her.”

“She is going to have to navigate the cult of Donald Trump, which remains in the Senate,” Ms. Braun said. “The word ‘collegiality’ no longer applies. It’s not even something people aspire to. Joe and Kamala have to heal the wounds and make people on the other side feel like they are being heard.”

In the produce section in Ralph’s, a grocery store in Los Angeles, Tracie Hunter, 46, reflected on the significance of Ms. Harris’s achievement.

“I’m very proud to be a Black woman, very proud to witness this important time in history given the huge divide that we have in our nation right now,” she said. Ms. Hunter added that she was “encouraged that we can continue to have our little Black girls and other girls of color feel encouraged like they can do whatever they want to do and they can be whatever they want to be.”

In Atlanta on Saturday, a celebration was underway on Auburn Avenue, the traditional and spiritual heart of the city’s African-American community. It sits beneath a towering mural of John Lewis, the pioneering civil rights leader who represented Congress for 33 years before his death in July. Some rode up on bicycles and toasted glasses of champagne. Others broke into song.

“It’s opened so many doors for so many little girls who feel like they have been silenced or told they couldn’t be who they are,” said Nikema Williams, who has been elected to succeed Mr. Lewis, as she stood in a parking lot below the mural. “So as a Black woman in politics, this means the world.”

Of Mr. Lewis, Ms. Williams said: “I know that he is somewhere doing a happy dance.”

Ms. Harris, like Ms. Williams, is also a member of the Alpha Kappa Alpha sorority. Soon, two dozen other sorority members formed a circle under the mural and burst into one of their sorority’s signature songs:

“Throughout my life, I’ve always been teased for being ‘bossy,’ assertive and ‘talking white,” Ms. Deberry said, “because I had big goals and vision for my life. Today, I am proud to be a bossy Black woman. Just like the vice president of the United States, Senator Kamala Harris.”