Home » Americas » A Meat War Is Waged Across State Lines

Depending on which side of the Colorado-Nebraska state line you’re standing on, the meat-related significance of March 20 varies drastically.

Gov. Jared Polis of Colorado recently declared the date to be “MeatOut Day,” seeking to decrease meat consumption and encourage meat eaters to consider plant-based diets. Though Mr. Polis’s proclamation was largely ceremonial, Gov. Pete Ricketts of Nebraska took notice, and on Monday he declared March 20 to be “Meat on the Menu Day” in his state.

Thus began a carnivorous culture war complicated by the prominent agriculture industries in both states, where livestock accounts for meaty portions of the economy.

“That is a direct attack on our way of life here in Nebraska,” Mr. Ricketts said at a news conference at Frank Stoysich Meats, a butcher shop in Omaha, where he announced the creation of Meat on the Menu Day.

MeatOut Day was started in 1985 by the Farm Animal Rights Movement, a nonprofit animal welfare organization. Since then, MeatOut Day proclamations have been issued by state and national authorities around the world.

The proclamation encourages people to “explore the benefits and flavors of a wholesome plant-based diet.” It cites potential health benefits, including lowered risk of ailments including heart disease, high blood pressure, stroke, various cancers and diabetes. It also lists environmental benefits, such as “reducing our carbon footprint” and “preserving forests, grasslands and wildlife habitats.”

The initiative ruffled feathers in Colorado’s agriculture industry, which contributes $47 billion annually to the state economy. 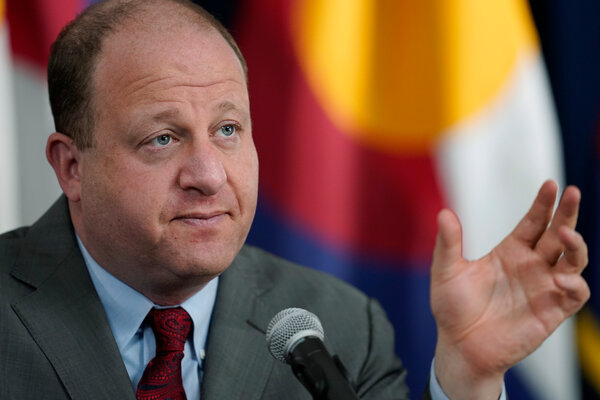 Several legislators spoke out against it on the floor of the Colorado Senate, CPR News reported. “For our governor to say that we should have a meat-free day is the last straw,” State Senator Barbara Kirkmeyer, Republican of Weld County, said. “It’s just one more attack against my county.”

The Colorado Cattlemen’s Association, an industry group, said in a statement that the MeatOut movement was “harmful and falsely critical of agriculture and meat production.”

The group announced a competing “Meat In” movement on March 20, encouraging Coloradans to “meet in a restaurant and order your favorite meat dish, meet your family and friends for a meal featuring meat.”

“Let’s focus on keeping meat in and on the breakfast, lunch and dinner table!” it said.

Other groups, including politicians, voiced support for similar events encouraging meat consumption. Three Republican officeholders announced plans to host a barbecue on March 20 in Calhan, Colo., that would feature beef from nearby Freeman Ranch. Another Facebook event simply urged participants to grill a rib-eye steak or smoke a brisket to show their support for Colorado ranchers and their displeasure with Mr. Polis, who is a Democrat.

“We say to hell with Polis and the leafy greens he rolled in on,” the description of the event reads, suggesting that Coloradans treat themselves to a 32-ounce porterhouse, or visit their favorite steakhouse to “order the biggest slab on the menu with a splash of bourbon!”

Shelby Wieman, a spokeswoman for Mr. Polis, sought to downplay the significance of the MeatOut declaration by noting that the state issues “hundreds of proclamations a year” at the request of various groups, businesses and special organizations.

“Governor Polis is a strong supporter of Colorado jobs in the meat industry and was just in Greeley and Fort Morgan, where the state partnered to provide the lifesaving vaccine to meat processing workers,” she said, also noting that “the previous administration issued a similar proclamation in 2011.”

Across state lines, Mr. Ricketts, a Republican, made clear his support of meat, and not for the first time. In 2019, he declared May “Beef Month,” to highlight the cattle industry.

At the news conference, he announced that March 20 would be designated Meat on the Menu Day to “highlight the importance of meat in a good diet as well as to provide an opportunity to support our farmers and ranchers.”

“Agriculture is Nebraska’s No. 1 industry and beef is our largest segment of production,” Mr. Ricketts said in a statement. “While meat is one of the most nutrient-dense foods you can eat, there are radical anti-agriculture activists that are working to end meat production and our way of life here in Nebraska.”

In Nebraska, one in four jobs is supported by agriculture, said Steve Wellman, director of the Nebraska Department of Agriculture. It contributes $21 billion to the state annually, $12 billion from meat products alone, he said.

According to the American Heart Association, red meat — including beef — contains more saturated fat, which can raise cholesterol and has been linked to heart disease, than other meats. For those reasons, health professionals recommend limiting red meat intake.

Environmentalists have rallied behind lowering meat consumption for years. According to the Environmental Protection Agency, agriculture accounts for about 10 percent of greenhouse emissions. Cattle in particular are known to have an environmental impact because they emit methane, a potent planet-warming gas. Studies have found that beef production generates about four to eight times as much carbon as pork, chicken or egg production, per gram of protein created. All meat production leaves a larger climate-change footprint than plant-based proteins like soy or other beans.

In response to the backlash, Kate Greenberg, the Colorado agriculture commissioner, issued an open letter to the state’s livestock producers and clarified that the proclamation was “nonbinding” and did not create a new state holiday, The Sterling Journal-Advocate reported. She noted that a similar proclamation had been made by former Gov. John Hickenlooper in 2011.

“You, your families and your hard work are part of the backbone of Colorado’s rural communities,” she wrote. “I want you to know that I’ve got your back as you do what you do best. The livestock industry is an essential part of Colorado’s past, present and future. No proclamation will change that.”

Boy, 11, gets behind wheel of car to save seriously-ill grandma