CHICAGO — People shouting from their windows, ringing cowbells on their porches and blaring car horns in the streets: As the news spread through cellphones and television screens that Joseph R. Biden Jr. had won the presidential election, spontaneous celebrations erupted within minutes across the nation.

“I thought the Cubs won the World Series for a second,” he said. “This feels so good to see everybody so happy. It feels good to know that I’m not the only one. And we haven’t had a chance to be happy together for so long.”

Even as Mr. Trump vowed to continue fighting the election results, and his supporters gathered in tense scenes at state capitols to insist without evidence that the election had been marred by fraud, the scene in many cities was one of jubilee: In Los Angeles, impromptu celebrations broke out on street corners. In Seattle, people shot off fireworks. In New York, crowds flooded into Times Square, and Senator Chuck Schumer, in a call to Mr. Biden from Brooklyn, held up his phone so the president-elect could hear the borough’s celebration.

“It’s a new day in America,” said Barry Karas, 74, a retired actor and political activist, who was hoisting two Biden signs onto his wrought-iron fence in Washington, D.C. Passers-by shouted back, including a man wearing a blue medical mask who said, “If it wasn’t a pandemic, I’d hug you!”

Nearby, a silver Toyota Prius repeatedly honked its horn, joggers held their arms up in jubilation and a woman on a bicycle rode through the intersection, shouting with joy.

As supporters of Mr. Biden celebrated, crowds of Trump supporters gathered with vows to continue fighting the results, and tense scenes began to unfold at competing events.

In Harrisburg, Pa., while some Biden supporters danced in celebration, carrying signs bearing messages like “The People Have Spoken,” about 200 supporters of Mr. Trump gathered nearby, chanting “stop the steal,” embracing the president’s baseless claims of election fraud. 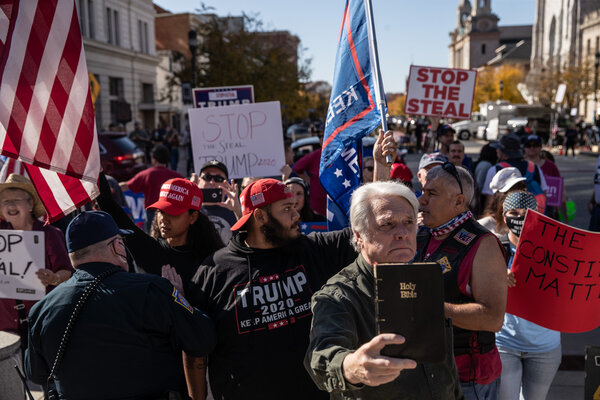 One man who identified himself as part of the far-right Proud Boys, a group notorious for violence, held a sign that said “Standing Back, Standing By, Mr. President” — a reference to Mr. Trump’s comments about the group during a presidential debate in September.

In Lansing, Mich., Trump supporters chanted, “Whose streets? Our streets?” and repeated Mr. Trump’s false contention that he had won the election. There was a brief confrontation when the Trump supporters approached a crowd of Black Lives Matter activists. Both sides included people who were armed.

The gatherings developed as Mr. Trump signaled that he intended to continue fighting election tallies, which showed Mr. Biden with an advantage of 4 million votes nationwide and on track to win more than 300 electoral votes.

Minutes after Mr. Biden was projected to have won the presidency, a crowd of several dozen Trump supporters stood in a cold fog in front of the State Capitol in Bismarck, N.D., as the national anthem played. They came to protest what they saw as a fraudulent election and to show support for Mr. Trump.

“It sickens me,” said Ken Weigel, who drove nearly two hours to attend the protest. He said he would not accept Mr. Biden as president.

The protesters shouted back, “We are not socialists!”

In downtown Los Angeles, where an anti-Trump rally had been planned by liberal groups including Black Lives Matter to protest the president’s efforts to contest the election, the event quickly became a site of celebration.

“I feel liberated,” said Linda Gomez, 37, an activist who has worked to promote rights for convicted felons and who herself was formerly incarcerated. She added, “Today is the people’s day.”

Ms. Gomez, like others there, said voting out President Trump would not be enough to achieve the changes voters were seeking.

“We have to make sure things are implemented,” she said. “We have to hold Biden accountable.”

Sitting outside the Rock & Roll Hall of Fame in Cleveland, Christian Hanna, 31, stopped his afternoon bike ride to take in the election news after he noticed his phone, balanced on the handlebars of his bike, “blowing up” with the updates.

Mr. Hanna is a registered Republican who said he disagreed with the divisive tone of Mr. Trump’s speeches and also disagreed with parts of Mr. Biden’s record. He said he voted for a third-party candidate, Jo Jorgensen.

He said some of his friends on social media were popping bottles of Champagne while others were saying, “Fight this, fight this.” He read a tweet from Mr. Trump in which the president claimed to have won the election, and said it made him think wistfully about how John McCain had accepted defeat in 2008.

“I believe in decorum,” said Mr. Hanna, who added that he was considering changing his registration to independent. “I believe in handling wins and handling losses with grace.”

Across the street, four sheriff’s deputies sat in an unmarked black S.U.V., keeping an eye out.