Home » Americas » A New Surge at a Santa Monica I.C.U.

“Baruch atah, Adonai Eloheinu, Melech ha’olam,” he began in Hebrew, the sterile divider behind him sealing off the patients with Covid-19 from the uninfected. “Blessed are you, Adonai our God, sovereign of all, who has kept us alive, sustained us and brought us to this season.”

Around the physician at the hospital in Santa Monica, Calif., a small army in scrubs — doctors, nurses, technicians — bowed their heads, bearing witness to what seemed to be the beginning of the end of the pandemic. Sixty-nine lives on the ward had been claimed by the virus. Pain and grief, life and death, fear and loss — month after grinding month — all of it had unfolded behind that thin divider.

And yet on this day, not a single patient in the Saint John’s I.C.U. had tested positive for the coronavirus. Dr. Grabie turned, and the I.C.U.’s medical director, helped by a respiratory therapist, zipped the wall open.

“We were all in awe,” recalled the medical director, Dr. Terese Hammond.

Now the ward’s Covid section is back and sealed off again.

Covid-19 is surging once more, at Saint John’s and in the world around it, driven by vaccine resisters and the virus’s hyper-contagious Delta variant. In California, new infections are appearing at a rate not seen since February. Governments, schools and businesses are starting to require masks indoors and vaccinations. 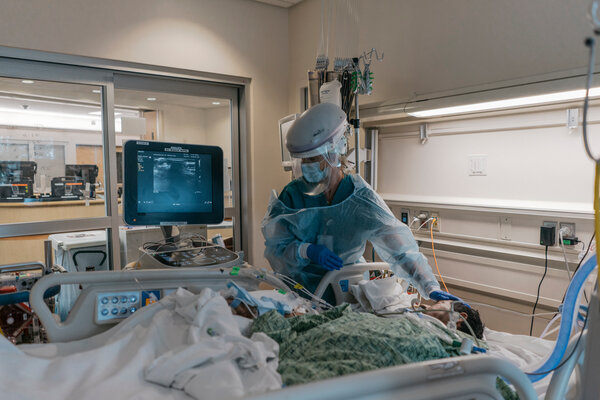 Los Angeles County is recording more than 2,500 new cases daily, and among the unvaccinated, hospitalizations and deaths are mounting. Even in affluent Santa Monica, where about 80 percent of residents are now vaccinated, dozens of people each day are testing positive for the virus, and hospitals like Saint John’s — a 266-bed facility that typically serves the ordinary needs of the beach communities around it — are being inundated again.

Last week, so many Covid patients were in intensive care that the space behind the plastic wall was not enough. The hospital had to reconfigure and expand the unit. Bonifacio Deoso, a nurse on the unit, was down to one weary question:

“When will this ever end?”

For the past three weeks, the 23-bed intensive care unit has been packed, Dr. Hammond said. Eight patients on the ward were being treated for the virus or related infections as of Sunday morning. Four were being treated with ECMO, a particularly labor-intensive, round-the-clock protocol.

Seven other patients were in the step-down I.C.U. on supplemental oxygen as they recovered from infections. “People are coming in sicker,” Dr. Hammond said. At least six people have died from Covid-19 in intensive care at St. John’s since June 1.

The wave of new cases is particularly challenging because it accompanies another surge — patients who had put off elective surgeries and other health care during the pandemic. In addition to the Covid-19 cases, Dr. Hammond’s staff has been caring this time for people with severe illnesses unrelated to the pandemic, except to the extent that missed doctor’s appointments and postponed routine screenings helped to land them in intensive care.

The patient demographics this time are different as well. Earlier in the pandemic, most were transfers from other Providence health care centers. Now many more are local and younger, Dr. Hammond said, and are being sent to intensive care after emergency room visits.

Given Santa Monica’s high vaccination rate, she said, the influx is “disconcerting.”

While vaccinated people appear to be getting far less sick from infections, the superior powers of the Delta variant are allowing the virus to proliferate in their systems and to spread, lethally, to the unvaccinated. Some 20 percent of Santa Monica residents — and nearly 40 percent of those in the county around it — have not yet been fully inoculated, despite the entreaties of public health experts.

“You’re here to take care of the human regardless of the decision they make,” said Vickie Gaddy, a nurse in the unit. But the new rush of infected patients, so soon after the optimism of June 1, has been crushing for Dr. Hammond’s exhausted staff members.

“As an I.C.U. nurse, you know you’re going to see a certain amount of death,” said Masha Crawford, who also works with the hospital’s Covid-19 patients. But, she said, “in this pandemic, you see people who should not be dying die.”

Ms. Crawford said that before the pandemic, she loved working out. Now, she has no appetite for exercise or self-care.

“The new wave” of cases, she said, “has taken that energy.”

Dr. Brian Tu, an emergency medicine physician, says he is concerned about the hospital workers outside the unit who now are being exposed to the virus, a result of so many cases being detected through emergency room visits.

Dr. Stefania Pirrotta says the sheer relentlessness of the new surge has made her “angry.”

Just two months ago, she said, she was hopeful. Now there is no end in sight.

As more people get vaccinated, how long will mask mandates stick around?