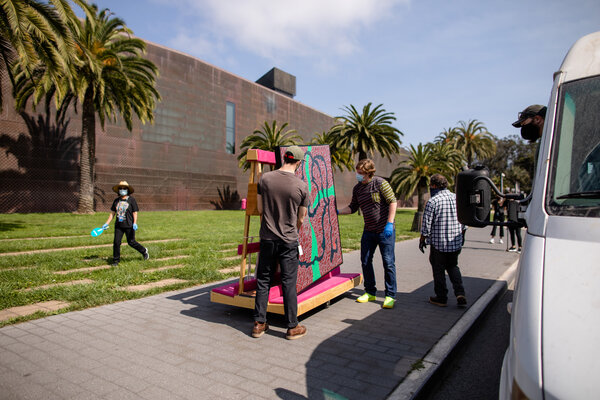 Usually, major museums begin planning their exhibitions three to four years ahead of time, Thomas Campbell, director and chief executive of the Fine Art Museums of San Francisco, told me on Thursday. They have to figure out loans from other museums and write the catalog of pieces.

The de Young Open — an exhibition that ran last year at one of the two institutions Mr. Campbell leads — was, however, very unusual.

First, there’s the fact that it was a contest, open only to Bay Area artists. Nearly 6,200 artists submitted more than 11,500 artworks for the show, which included 877 works from 762 artists. The pieces could also be sold.

Then, there’s the biggest reason the show was singular: It was conceived, assembled and shown essentially entirely during the pandemic, as a way to mark the de Young’s 125th anniversary.

Now, Mr. Campbell said, the exhibition is set to become a triennial event — at least one tangible silver lining from a turbulent year.

“Looking back, what was remarkable about it was that it really brought the whole museum together,” he said. “And it really gave us a connection with artists all over the Bay Area.”

As my colleague Robin Pogrebin wrote earlier this week, the year has been brutal for museums, particularly in Los Angeles, where they haven’t been able to open for almost a year.

[Read more about how Los Angeles museums have struggled with closures.]

In the Bay Area, museums fared slightly better — they were allowed to reopen when cases were low, but were ordered to close again before the holidays as cases skyrocketed across the state, filling hospitals.

Because the museum was at reduced capacity, some 28,000 visitors saw the de Young Open exhibition in person, when typically a show might get closer to 100,000.

But it wasn’t just the pandemic that artists responded to. The submission portal for the contest opened on June 1, just a week after George Floyd was killed.

Artists were asked to submit work that could fit the theme, “On the Edge.”

Enrique Chagoya, a Stanford professor and one of the established artists who was asked to help judge the contest, told me late last year that the works he saw reflected a world in deep social, political, economic and environmental crisis.

“Art is kind of a reflection of society and an interaction with social values and experiences and whatever happens in the artist’s life,” he told me. “Even if you do the most abstract nonrepresentational work.”

And Mr. Chagoya said that the art world itself would be forever changed. Many people were laid off from museum jobs. Galleries were forced to close, and many may not reopen. All that will show up in the art of the future.

So — in spite of the awkwardness at having friends whose work didn’t make it through the anonymized judging process — he said that the idea for the de Young Open as a contest for local artists, and one that explicitly explored immediately relevant themes, was helpful.

“One of the best things a museum can do is get in tune with the local community,” he said.

Cheryl Derricotte — a visual artist based in San Francisco whose work was selected for the show — told me that she appreciated the museum’s focus on highlighting art of the Bay Area.

“Museums often look to the next biggest city, instead of their own backyard,” she said. “The de Young took the moment to engage with social justice movement work, with pandemic-related work, that really embraces our collective thinking and anxiety and challenges.”

Ms. Derricotte’s work, “2017 Year-at-a-Glance: 214 Dead Black Men,” predated the summer’s protests, she said; the theme of police brutality had been on her mind long before then.

“The calendar was a vehicle for me to show the magnitude,” she said.

Ms. Derricotte, who is Black, said she first relocated to the Bay Area for her “day job” — something she isn’t shy about keeping, in order to live as an artist in one of the nation’s most expensive metros. And that’s been important during the pandemic.

Ms. Derricotte said that collectives — such as the 3.9 Art Collective, formed in resistance to the erosion of San Francisco’s Black population — had also provided crucial help for both artists and museums, as they rethink their approaches to diversity and accessibility.

“If we’d been going along, business as usual,” he said, “I don’t think we would have reflected as deeply about the work that needs to be done.”

Texas and California, the country’s two largest states, have taken very different approaches to managing their energy needs. But both are confronting the same frightening reality: They may be woefully unprepared for natural disasters driven by climate change. [The New York Times]

Officials in Fresno, Orange County, Los Angeles and San Diego were among those who blamed severe weather across the country for disrupting vaccine shipments and said they’d be forced to cancel appointments or shut down sites. Leaders in the Bay Area also said some appointments may be canceled.

Gov. Gavin Newsom, in a statement Thursday evening, said, “While the Legislature’s proposal represents a step in the right direction, it doesn’t go far enough or fast enough.”

A U.C. Santa Cruz epidemiologist says that he analyzed vaccine trial data and it suggests that not only do vaccines prevent recipients from getting sick, they also combat the virus’s spread. [Lookout Santa Cruz]

Democratic leaders on Capitol Hill introduced the president’s far-reaching overhaul of the nation’s immigration system. It would, among other things, allow some 11 million undocumented immigrants to eventually apply for citizenship and increase legal immigration. [The New York Times]

Vice President Kamala Harris said that the 2.5 million women who have left the work force since the beginning of the pandemic constituted a national emergency. [The New York Times]

If you missed it, read this series about how working mothers are on the brink. And how our society has failed them. [The New York Times]

The governor has suggested he’s waiting for Attorney General Xavier Becerra to be confirmed as leader of the Department of Health and Human Services before announcing a replacement. His confirmation hearing is set for next week. [CNN]

If you missed it, he’s made his two other major appointments: Senator Alex Padilla to replace Ms. Harris and Shirley Weber, who replaced Mr. Padilla as secretary of state. [The New York Times]

You can go home again — to California — if you’re Ms. Harris. [The Los Angeles Times]

Register for the DealBook/ DC Policy Project to hear conversations with Janet Yellen, Steve Ballmer, the chief executive of Robinhood and more.

Whatever else is happening on Earth, NASA landed a spacecraft on Mars in the agency’s most ambitious effort in decades to study whether there was ever life on the red planet. The rover was named Perseverance.

Read all about it here.