MIAMI — Even in death, Rush Limbaugh sent political partisans to their fighting corners.

After Mr. Limbaugh died in Florida last week, Gov. Ron DeSantis, a Republican who was close with the right-wing talk radio megastar, said he would direct the state’s flags to be lowered to half-staff in his memory once the date is set for Mr. Limbaugh’s burial.

That honor is usually reserved for well-known public officials, members of the military and law enforcement officers who died on duty. On Monday, for example, Mr. DeSantis directed that flags be lowered on Tuesday to honor a Pinellas County sheriff’s deputy who was fatally struck by a car last week.

But it is also within the governor’s power to issue what are known as flag memorandums to commemorate tragedies such as the Parkland school shooting. Mr. DeSantis said on Friday that Mr. Limbaugh, a Florida resident for more than two decades who died in Palm Beach, was an “absolute legend.”

“When there’s things of this magnitude, once the date of interment for Rush is announced, we’re going to be lowering the flags to half-staff,” he said at a news conference in West Palm Beach on Friday.

“Not much needs to be said,” the governor added of Mr. Limbaugh. “He was a friend of mine and just a great person.”

Though Mr. DeSantis has not yet issued the flag memorandum regarding Mr. Limbaugh, his announcement about it ignited the sort of political firestorm that Mr. Limbaugh himself might have fanned when he was alive.

Nikki Fried, the Florida agriculture commissioner, who is the only Democrat elected to statewide office, said on Monday that she would refuse to lower the flags in the state offices under her purview. The Florida Department of Agriculture and Consumer Services, which she oversees, includes nine regional licensing offices, 38 state forests and 23 agricultural law enforcement inspection stations.

“The flag is a symbol of our country, representing freedom and patriotism and liberty, and is supposed to be lowered to honor those who have served,” Ms. Fried said in an interview on Tuesday. “To lower the flag for somebody who’s spent his entire career talking hate and bigotry and dividing our country and spewing conspiracy theories is not the way we honor those who have fought for our flag.” 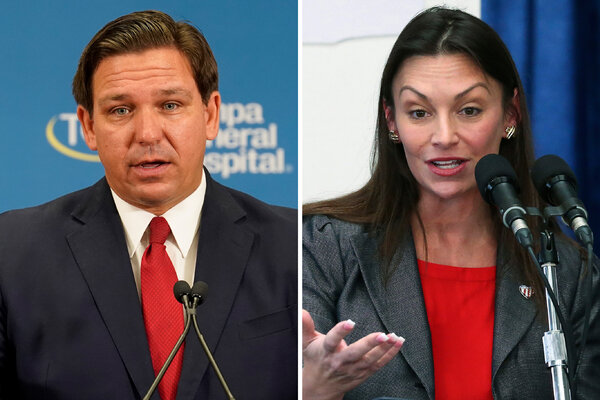 A few local mayors said they would also defy the governor’s order. Mr. DeSantis’s office has not commented on the pushback.

The flap has signaled the start of the 2022 election season in Florida. Ms. Fried is considering a run for governor against Mr. DeSantis, who is up for re-election. Other Democrats are also weighing candidacies, including U.S. Representative Charlie Crist of St. Petersburg, who served as the state’s Republican governor for one term before leaving the party.

Mr. DeSantis, who ran as an acolyte of former President Donald J. Trump in 2018, won by only about 32,000 votes after a recount. But Mr. Trump, himself now a Palm Beach resident, amassed such a solid victory in November that the state has looked increasingly difficult for Democrats to win back.

Mr. DeSantis has used his policies during the coronavirus pandemic, including the reopening of schools for in-person instruction in the fall, to start rallying his political base. Indeed, the event on Friday during which he announced that he would direct flags to be lowered for Mr. Limbaugh felt more like a rowdy political gathering than a staid news conference, with cheers and standing ovations from the crowd.

Mr. DeSantis noted that Mr. Limbaugh had invited him on his radio show when he was running for governor.

“I was getting the tar kicked out of me every day, and he had me on the week before the election in 2018,” he said. “He didn’t have a lot of guests. I was honored to be on his show a couple of times.”

The news conference was held indoors at a Hilton hotel. Afterward, Palm Beach County sent the hotel a letter warning that attendees were shown on videos and photos not wearing masks, in violation of a local mandate.