In Vancouver’s Downtown Eastside, health authorities have prioritized vaccinations for the homeless and other disadvantaged people to try to contain the pandemic.

As a foreign correspondent who returned to Canada in 2017 after three decades abroad, I envisioned the country as a prosperous idyll after covering sludge disasters in Eastern Europe, a war in the Caucasus and abject poverty in the Balkans.

Then I visited Vancouver’s Downtown Eastside. 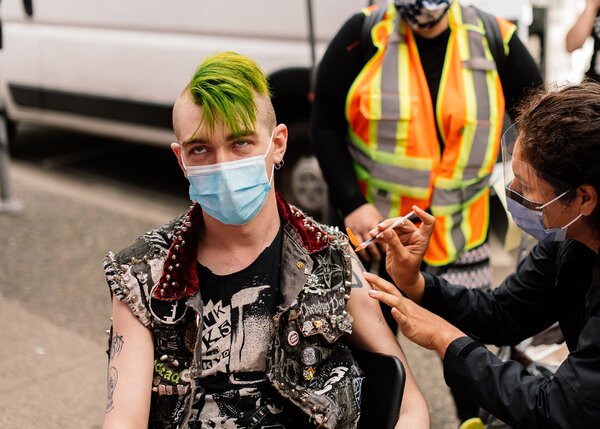 The gritty neighborhood is in one of Canada’s most dreamy and picturesque cities, on about 15 blocks that are among the poorest and the most squalid in the country.

An epicenter of Canada’s opioid crisis, the area has become a stark symbol of urban poverty, addiction and social marginalization in one of the world’s wealthiest nations, but also one of resilience, community and progressive social policies.

Men and women inject illicit drugs in alleyways just steps from Gastown, an area peppered with gastro pubs and upmarket restaurants. The neighborhood also hosts North America’s first supervised injection site, where people inject opioids, crack and crystal meth, under the supervision of nurses, and are provided with clean, complimentary syringes and other supplies.

Since the beginning of this year, the Downtown Eastside has also hosted a pioneering program in which the local health authority has provided free vaccinations against Covid-19 to homeless people and those living in shelters or assisted housing in the neighborhood. It has set up mobile vaccination tents, targeted people in food lines and even offered $5 to those who receive the vaccine.

During a period when the relatively sluggish vaccination rollout in Canada has fomented anger and frustration, some local residents have complained about their tax dollars going to fund inoculations for homeless people when they themselves don’t have access to vaccines.

But Dr. Althea Hayden, the public health officer for the health authority overseeing the program, told me that providing vaccines to the most vulnerable in the city was a public health imperative: People in the neighborhood were four times as likely to be hospitalized or die if they contracted Covid-19 as the general population. Many had compromised immune systems, faced huge challenges to self-isolate and were at higher risk for catching the disease and transmitting it to others.

“Vulnerable communities are the folks who disproportionately suffer the effects of any communicable disease and have worse outcomes,” she told me. “I was expecting more of a backlash, but people seem to understand why this is important.”

The vaccination program comes as British Columbia’s health care system is under severe strain because of the pandemic with hospitalizations reaching new heights. As of Friday, the province had recorded 123,000 cases of Covid-19, of which 1,550 people have died.

Meanwhile, in the Downtown Eastside, the virus appears to have been largely contained. In mid-February, the neighborhood had about 75 cases of the coronavirus in one week, according to the local health authority. Today, about 7,500 local residents have been vaccinated and cases have trickled down to about five this week.

This week, Alana Paterson, a photographer for The New York Times, set out with her camera to document the vaccination program in action. A Vancouver resident herself, she told me she was heartened by the way dedicated nurses had managed to establish trust in a community with a strong distrust of authority. Some residents had told the nurses they were too afraid to get vaccinated.

On Wednesday, at a makeshift vaccination pop-up in the heart of the neighborhood, Alana saw dozens of people lined up to get vaccinated, some slumbering in folding chairs. A man with a green mohawk and tattooed arms sat patiently wearing his mask while he received the vaccine. Another was so intoxicated that he could barely stand up. Nurses gave him a bottle of water and a lollipop, and after his shot, he put hand sanitizer in his water bottle and guzzled it.

In the surrounding streets, Alana told me, she saw people holding drug needles, some in their pockets or their shoes. Others lay, high, in the fetal position on the sidewalk. At an overdose prevention site, a visibly pregnant woman injected herself. Three nurses rushed in and called a doctor to tend to her.

At the vaccination pop-up, one man, dressed in workman’s clothes, reacted with fury when he was turned away after a nurse determined that he was ineligible because he lived in a condominium in a more gentrified, upmarket area.

“I walk by these people every day,” he protested. “This is outrageous.”

But health workers said limiting the vaccination to those who are vulnerable was the mission of the program, while it was also necessary to avoid chaos and deter vaccine tourists from other parts of town.

“Vaccinating here is necessary to help avert a public health disaster in the city because they are part of the community,” Alana told me, adding that if the coronavirus invaded, “it would be like a bomb going off and there would be no way to control it.”

Dan Bilefsky is a Canada correspondent for The New York Times, based in Montreal. He was previously based in London, Paris, Prague and New York. He is author of the book “The Last Job,” about a gang of aging English thieves called “The Bad Grandpas.” @DanBilefsky

President Biden held a virtual summit of Thursday, making a commitment to reverse the United States’ poor climate change record. Prime Minister Justin Trudeau, once the cause’s flag bearer, attended in the embarrassing position of representing the only Group of 7 country where greenhouse gas emissions have increased since the Paris Agreement, largely because of the oil sands. (An update: Mr. Trudeau raised Canada’s target for emissions reductions to 40 to 45 percent, Mr. Biden committed the United States to a 50 percent reduction).

When Mr. Trudeau legalized recreational marijuana, many investors had dreams of wealth from getting in on the ground floor of the nation’s newest legal vice. Two and a half years later, the industry continues to retreat and remains burdened with dizzying losses.

In a decision that angered civil liberties groups, a court in Quebec largely upheld the province’s law barring public sector employees from wearing religious symbols while on the job.

A Bloc Québécois member of Parliament acknowledged that he was the source of a leaked screenshot showing William Amos, a Liberal member from Quebec, appearing nude on Zoom by mistake during a House of Commons session last week.

In her review, Jeannette Catsoulis wrote that “The Marijuana Conspiracy,” a new film set in Canada in 1972 dramatizing an actual experiment to test the effects of cannabis on young women, is an “agonizingly gauche movie” that “feels like a missed opportunity for a searing ethical investigation.”

This week, Patrick Marleau surpassed the record for the greatest number of games played in the N.H.L. set by Gordie Howe, another native of Saskatchewan, in 1961.