Home » Americas » A President Whose Words Have Not Aged Well

This was President Trump on Tuesday night, in Pennsylvania. “Please, please,” he pleaded. “I don’t have that much time.”

Mr. Trump’s exhortation carried a certain abrupt desperation. It was reminiscent of Jeb Bush’s “please clap” to an audience before the New Hampshire presidential primary in 2016 or President George Bush’s “Message: I care” in 1992. Both were utterances that in retrospect served as epitaphs for doomed campaigns.

Whether that proves true in Mr. Trump’s case is not yet known. But “will you please like me?” — which immediately went viral — seemed especially germane to the president’s predicament. To begin with, the appeal was directed at suburban women, who polls show have been particularly repelled by Mr. Trump compared with four years ago.

Shortly after the president made his remark, Sarah Longwell, the founder of Republican Voters Against Trump, tweeted out a clip of it along with this retort: “I did a focus group tonight with women who voted for Trump in 2016,” Ms. Longwell wrote. “Not a single one was planning to vote for him again.”

In other words, Mr. Trump’s effort smacked of a too-late, too-lame apology to an ex who has long since moved on. It also underscored Mr. Trump’s special knack for making statements (or sending tweets) that are perfectly suited to being clipped, saved and hurled back in his face when facts contradict him later on, or in real time. Mr. Trump has proved himself, again and again, a grand master of delivering famous last words.

The coronavirus has hardly cured him of this. If anything, Mr. Trump seems to be tempting fate on a daily basis since he himself became infected. He has said he is a “perfect physical specimen,” feels better than he did 20 years ago and is now “immune” from the disease — never mind that the course of the coronavirus has shown itself to be treacherous and unpredictable. He continues to insist that the virus is “disappearing,” an assertion flatly contradicted by rising rates of infection across much of the country in recent days.

When Mr. Trump became sick, some advisers hoped it might chasten him, or at least curtail his knack for making wildly off-base or premature claims about the virus. He already boasted a long rap sheet of “unfortunate remarks,” all readily captured and spread via video, Twitter, TikTok and wherever else famous last words get immortalized these days.

“We have it totally under control,” Mr. Trump said in January on CNBC, an opening salvo of denial that would soon be hung around his neck.

“This is their new hoax,” he said the following month at a rally in South Carolina.

“One day, it’s like a miracle, it will disappear,” he said around the same time.

Traditionally, presidents have tried to avoid making statements that might prove embarrassing later on. They choose their words carefully and proceed “out of an abundance of caution,” per the tagline of the moment in Washington. 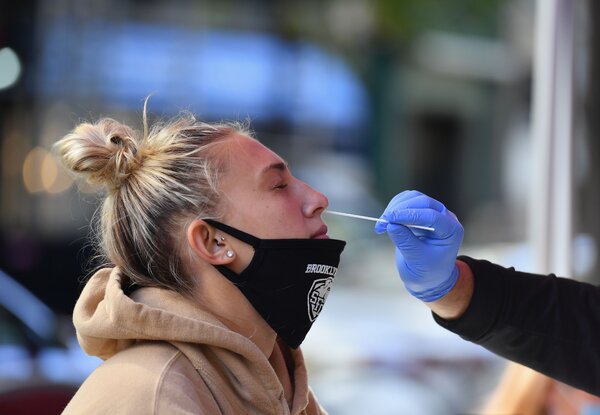 Every president typically gets one or two shudder-worthy sound bites on their permanent record. President Barack Obama promised that “if you like your doctor, you can keep your doctor” under his health care plan, a proposition that proved false during the troubled rollout of the Affordable Care Act in 2013.

“Brownie, you’re doing a heck of a job,” President George W. Bush said in a shout out to Michael D. Brown, the director of the Federal Emergency Management Agency during Hurricane Katrina, which soon became a Category 5 fiasco.

President Bill Clinton asserted that “I did not have sexual relations with that woman, Miss Lewinsky,” before admitting as much. President George Bush, in his most famous vow, said, “Read my lips: no new taxes,” before raising them.

“Politicians are always going to say things they regret,” said Victoria Clarke, a longtime Republican communications strategist who has advised several elected officials and administrations. Ms. Clarke invoked a favorite quote from one of her former patrons, former Senator John McCain, Republican of Arizona: “May the words I utter today be tender and sweet, because tomorrow I may have to eat them.”

The current White House has served up a sprawling buffet, with the president as head chef. It is a crowded kitchen, though. A proclivity for “unfortunate remarks” has been a trademark of the Trump administration from the outset.

It kicked off on Day 2 when the first of four Trump White House press secretaries, Sean Spicer, claimed that the crowd gathered for Mr. Trump’s 2017 inauguration was “the largest audience to ever witness an inauguration, period.” Overhead photos of Mr. Trump’s inaugural crowd next to Mr. Obama’s proved this remark to be ridiculous, period.

But the response to the coronavirus has placed the White House’s pre-existing condition on, well, steroids. In March, an outgoing White House chief of staff, Mick Mulvaney, accused the media of hyping the pandemic to “bring down” the president. Mr. Mulvaney said this at the Conservative Political Action Conference, an annual gathering that has become a pep rally of Trumpism. It was also an early petri dish for the illness in the Washington area.

The current outbreak in White House has been accompanied by a video parade of “unfortunate remarks” — or, depending on your point of view, a rampage of karma.

News of the current White House press secretary, Kayleigh McEnany, testing positive last week was accompanied by a now-infamous clip from a Fox News interview Ms. McEnany gave in February. “We will not see diseases like the coronavirus come here,” vowed the then-future press secretary. “Isn’t that refreshing when contrasting it with the awful presidency of President Obama?”

Likewise, when Kellyanne Conway, a former senior White House adviser, revealed her own coronavirus diagnosis, numerous news media outlets and Twitter feeds resurrected an oft-mocked statement she made about the still-emerging outbreak in March. “It is being contained,” vowed Ms. Conway, who herself had earned a special White House status for infamous statements when she defended Mr. Spicer’s inaugural crowd whopper by saying he was merely providing “alternative facts.”

The White House has shown a particular gift for setting timelines that have proved embarrassingly unrealistic. Mr. Trump suggested in March that the virus would die in warmer weather and expressed a hope that the nation’s churches would be filled on Easter Sunday, April 12. Vice President Mike Pence predicted on April 24 that “by Memorial Day weekend we will have this coronavirus epidemic behind us.” This was right around when Jared Kushner, a senior adviser and Mr. Trump’s son-in-law, was predicting the country would be “really rocking again” by July.

To be fair, White House communications has never been the high wire act that it is today. Abundance of caution will only get you so far.

“No president can go four years without making a comment that can be considered a ‘gotcha moment,’” said Erik Smith, a veteran Democratic spokesman and operative. “But this president seems to pile them up like cordwood and take joy in it.”

Indeed, part of Mr. Trump’s appeal to his supporters is that he refrains from the usual politician’s caution, even in situations — like the middle of a pandemic — that would seem to demand an abundance of it. It has lent the president a level of credibility as a “straight shooter,” even as he has been caught in thousands of false statements, dubious boasts and comical reassurances.

“It affects virtually nobody!” Mr. Trump declared of the coronavirus at a packed rally in Ohio last month — another remark that would go literally viral. It did not age well.

Two children among dead in US festival shooting