Home » Americas » A Quiet Life, a Thunderous Death, and a Nightmare That Shook Nashville

NASHVILLE — Anthony Warner had a solitary job as an information technology specialist, stopping in to various offices to fix computers. He was 63. He was not married. His neighbors barely knew him.

He sent an email to one of his clients three weeks ago to say he was retiring. He started shedding possessions: He told his ex-girlfriend that he had cancer and gave her his car. Records show that he signed away his home on the day before Thanksgiving.

But he made sure to hold on to one last thing: His R.V., a Thor Motor Coach Chateau that he kept in his back yard.

He parked the vehicle around 1:22 a.m. Christmas morning on Second Avenue North in downtown Nashville, in the heart of a district of honky-tonks, restaurants and boot shops that would often be packed but was quiet in the small hours of a holiday morning. The R.V. had been rigged with explosives and a speaker set to play a warning and a song: “Downtown” by Petula Clark, a hit released in 1964 celebrating the bright lights and bustle of a vibrant city.

A few hours later, police officers heard the speaker’s message and rushed to clear as many people out of nearby apartments and hotels as they could. Just before dawn, the R.V. exploded, its concussion reverberating for blocks. Debris was flung several blocks away. Mr. Warner was inside the R.V. It is believed that he was the only person who died.

“We’ve come to the conclusion that Anthony Warner is the bomber,” Donald Q. Cochran, the U.S. attorney for the Middle District of Tennessee, said at a news conference on Sunday. “He was present when the bomb went off, and he perished in the bombing.”

Investigators said they believe that he acted alone. He was identified through remains found scattered among the wreckage.

Hundreds of federal investigators had flocked into Nashville after the blast, chasing the leads that poured in by the hundreds to locate the culprit. Now that they have found him, they are still trying to make sense of who he was and why he would set off an explosion that shattered a district where the lights are indeed bright and people flock to forget their trouble and cares in a year with no shortage of them.

“These pieces of information will help us understand the suspect’s motives,” Douglas Korneski, the special agent in charge of the F.B.I. field office in Memphis, said at the news conference. He added, “None of those answers will ever be enough for those who have been affected by this event.”

The authorities said Anthony Quinn Warner, 63, detonated an R.V. in downtown Nashville on Christmas and died in the explosion. Law enforcement officials said they did not believe anyone else was involved.

“Based on the evidence that we’ve gathered at this point, we’ve come to the conclusion that an individual named Anthony Warner is the bomber, that he was present when the bomb went off and that he perished in the bombing. We based this conclusion on forensic evidence, including DNA evidence that you’ll hear about, as well as evidence that was gathered at the scene of the bombing.” “Tennessee Bureau of Investigation, as well as the F.B.I. laboratory in Quantico, Virginia, completed their DNA testing of a sample of human remains recovered at the scene. Those results were consistent with the suspect identified by U.S. Attorney Cochran.” “Anthony Warner is the man believed to be responsible for this horrible crime. There is no indication presently that anyone else was involved in this crime. As I said earlier and several times before, Nashville is considered safe. There are no known threats against this city.” 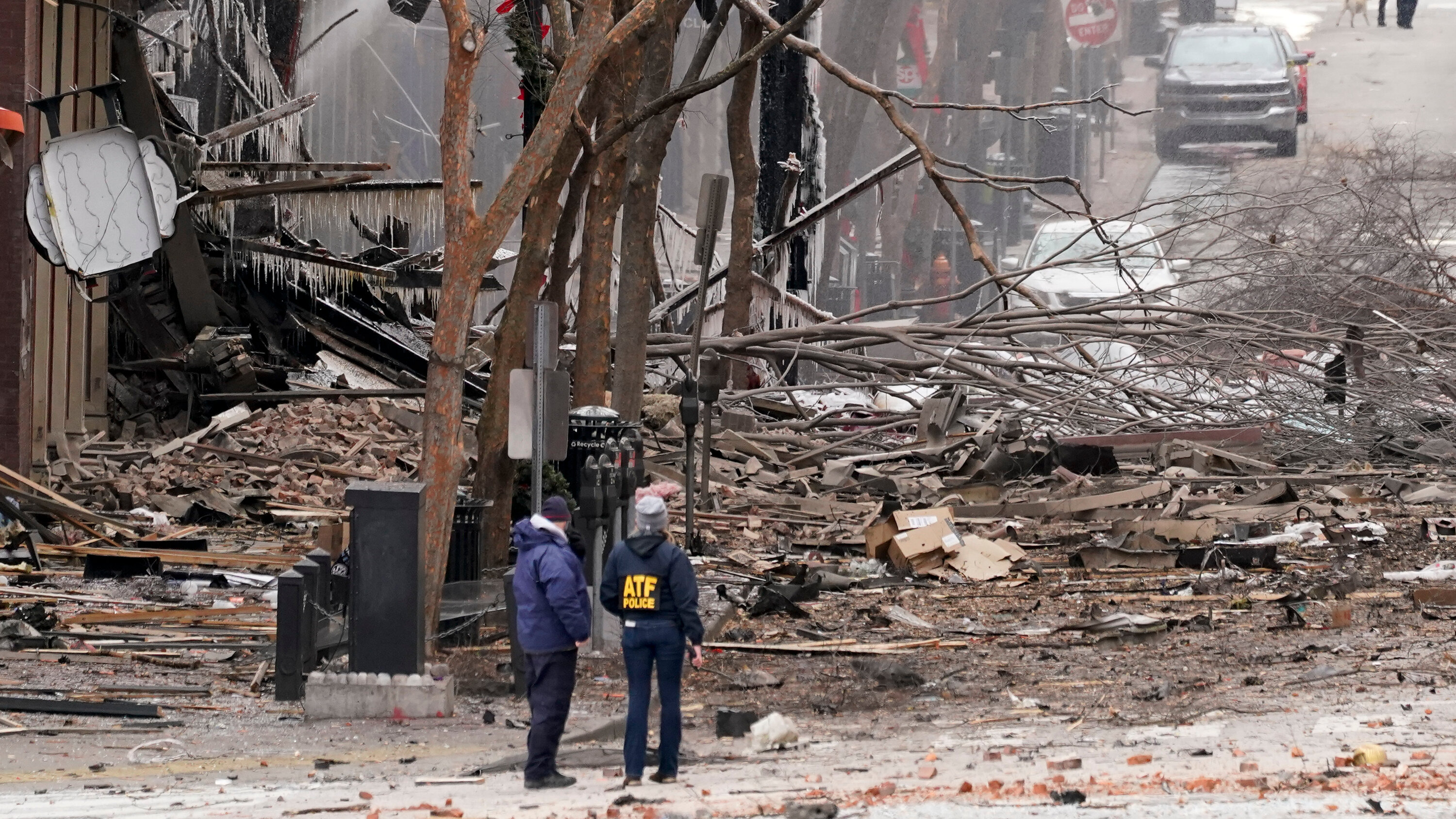 Mr. Warner emerged as a person of interest after investigators from the Tennessee Highway Patrol were able to find a vehicle identification number for the R.V. among the rubble.

That led federal agents to a brick duplex belonging to Mr. Warner in Antioch, a community in the Nashville area roughly 11 miles from where the explosion occurred. On Saturday morning, a bomb team swept the duplex to check for explosives, and then dozens of federal investigators combed the property for evidence.

Images of the same duplex, captured on Google Street View in March and May 2019, show an R.V. in the yard that appears similar to the one that the police say was detonated.

Mr. Warner had experience working with electronics as an information technology contractor for Nashville area businesses, and also had a burglar alarm business that was registered in Tennessee from 1993 to 1998, according to state records.

Steve Fridrich, president of Fridrich & Clark Realty in Nashville, said that he had been in contact with the F.B.I. about Mr. Warner, who he said he hired occasionally, usually around once a month, to work on computers. Mr. Fridrich said that Mr. Warner was not an employee and that he believed he provided I.T. support for several businesses.

Mr. Fridrich said Mr. Warner sent the firm an email on Dec. 5 saying that he was retiring.

“He’s a nice guy, and this seems uncharacteristic of the Tony we know,” Mr. Fridrich wrote in a text message. “He was very professional and knew his stuff.”

The two-bedroom duplex searched by investigators is one of several on a quiet cul-de-sac. Children played tag nearby and neighbors looked on as agents from the F.B.I. and Bureau of Alcohol, Tobacco, Firearms and Explosives streamed in and out of the house. “It’s a quiet neighborhood,” said Diana Hernandez, who lived a few blocks away. “It’s very surprising. It’s like a movie scene.”

Across the street from the duplex, Anna Blackmon, who has lived in the neighborhood for 30 years, said she did not know the person who lived there, or anyone in the duplexes, as they were largely rental properties with a near constant churn of residents. “You have everybody in and out all the time,” she said.

Neighbors said that Mr. Warner grew up in a home roughly a quarter-mile away. No one answered when a reporter visited the property on Saturday, and other efforts to reach Mr. Warner’s family were unsuccessful.

Bernice Gilley, who has lived across the street from the Warner family for 56 years, said she remembered Mr. Warner and his brother playing football in the yard as children. The family worshiped at a Roman Catholic church a few miles away, Ms. Gilley said.

“They were one of the nicest people you would ever want to meet,” she said. “They’ve always been a fine family.”

Nashville was still trying on Sunday to grapple with the consequences of the bombing. The street was charred and littered with mangled debris. At least one building collapsed, and dozens of others sustained damage. The force of the blast blew out windows and doors for blocks.

Investigators have not said whether there was any significance to the specific location where the R.V. was parked, in front of an AT&T transmission facility. The explosion caused disruption that reached across the region, cutting off cellphone and internet service to homes and business across parts of Tennessee and into Kentucky and Alabama. Flights were grounded and 911 operations were knocked offline. Mr. Warner’s only apparent tie to the company to come to light so far is a rather tenuous one: His father once worked for Southern Bell, which eventually merged into what is now AT&T. Law enforcement officials have said they are unsure whether there was any other connection.

AT&T said on Sunday that its crews were able to make considerable progress, restoring electricity to four floors of the building and pumping out three feet of water in the basement from firefighting efforts. The company had set up a portable cell site to help return some service, and had more crews heading into Nashville.

The police released a photograph of the R.V. that shows the vehicle heading through downtown with its headlights on, the white camper illuminated by streetlights and glowing storefronts.

Officer James Luellen of the Nashville Department came upon the vehicle several hours later. He was responding to reports of gunfire. Instead, he found the R.V., with its speaker warning that a bomb was inside and that it was about to detonate.

He also remembered the song that was interspersed with a countdown. Lyrics about bright lights stuck in his mind.

He called for backup and was quickly joined by five other officers: Brenna Hosey, Michael Sipos, Amanda Topping, James Wells and Sgt. Timothy Miller. Other than Sergeant Miller, an 11-year veteran, none had been with the Police Department longer than four years.

Since Friday, they have been held up as heroes, with officials saying that the bombing could have created far more carnage without their quick action.

“I think they may consider what they did a regular part of their duties,” Mayor John Cooper said as he stood beside the officers at a news conference on Sunday. “But we in Nashville know it was extraordinary.”

At the news conference, the officers spoke publicly about their work on Christmas morning for the first time. They described rushing into buildings and rousting residents — “scaring the bejesus” out of at least one of them.

Then there was a burst of orange, and the officers remembered temporarily losing their hearing from the concussion of the blast. They remembered searching for their colleagues afterward, worried that they had been hurt or killed, and then feeling grateful that they and others in the neighborhood had survived.

“That was God,” Officer James Wells said. “I’m not going to shy away from that.”