Home » Americas » A Star of the ‘Raging Rooks,’ He Helped Change the Face of N.Y.C. Chess

Shortly after returning from a disappointing finish in the 1990 national tournament, the coach for the chess team at Harlem’s Adam Clayton Powell Jr. Junior High School asked one of the most talented players to help lead a return trip the following year.

The team, known as the Raging Rooks, labored all year, devouring chess strategy books and playing wherever they could — in a classroom, in a teammate’s lobby, at a local Burger King and even over the phone — before prevailing at the 1991 tournament. They tied Masterman Laboratory and Demonstration School in Philadelphia for first place, besting a field that included three-time defending champion Dalton, a private school on the Upper East Side.

The team became celebrities in their hometown and even landed on the front page of The New York Times. And it was Charu Robinson — the steadiest player among the Rooks — who helped lead the way.

“He just had a very focused, determined intentionality to his play,” said the coach, Maurice Ashley, the first Black grandmaster, calling Mr. Robinson one of his best two or three players on that team. “And so that leadership mattered, that he was up there, and he embraced it, and it skyrocketed us to winning that year.”

Mr. Robinson died suddenly on Oct. 13 at age 43, his family said, declining to say more than that he died of natural causes. His death dealt a blow to the city’s chess community, where he had remained a fixture and role model, having taught at Mott Hall, a middle school in Harlem (where he won another national championship, as assistant coach, in 1999), and later at Chess NYC, which offers private chess instruction, and at Success Academy, a network of charter schools.

“I wish we had more Charus,” said Debbie Eastburn, the chief executive of Chess in the Schools, a city nonprofit, for whom Mr. Robinson also taught.

Mr. Robinson is survived by his two sisters, Stacey and Aisha.

The early ’90s success of the Rooks, composed of Black, Latino and Asian students, changed chess in New York City. Until then, scholastic chess had been dominated by mostly white players from elite schools such as Dalton, Hunter College High School and Trinity.

“There was no clear evidence that chess could be an inner-city sport,” said Jerald Times, a self-taught master who is now the chess director at Success Academy. “So when these kids showed up, these Raging Rooks, on the front page of The New York Times, it transformed the landscape of how we see inner-city chess.”

As many as 90 percent of participants at national tournaments were white at that time, Mr. Times estimated. The proportion of minorities has grown fourfold since, he said, to 40 percent, because of the example of the Raging Rooks and an I.B.M.-funded research study, the Margulies Report, that tied reading performance to playing chess.

“What that does culturally for the kids for whom Charu would be a role model is just unfathomable,” said David MacEnulty, the city’s first full-time public school chess instructor, whose own success teaching chess at Bronx Community Elementary School 70 inspired the movie “Knights of the South Bronx.” “I’ve seen it over many years, I’ve seen it literally change lives — I mean, totally transformed people. And Charu was a part of that.”

The Chess in the Schools program had begun placing chess teachers such as Mr. Ashley in schools in the mid-1980s. The attention surrounding the Raging Rooks attracted philanthropic donations.

Chess in the Schools grew to reach more than 100 schools in the 1990s and 2000s, offering semester-long instruction; today, it serves 48 schools, primarily those receiving Title 1 funding — granted to schools with a large share of students from low-income families — with full-year programming.

Kwadwo Acheampong, who sits on the nonprofit’s board of directors, said Mr. Robinson’s championship was key to the story of Chess in the Schools.

“We knew about the Raging Rooks because they were kids who looked like us in a neighborhood that was nearby,” said Maliq Matthew, 40, who grew up in the South Bronx. 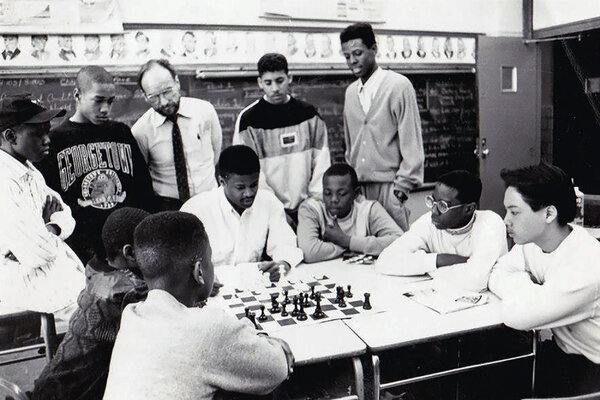 Mr. Robinson matriculated on a full scholarship to Dalton, where his chess teammate was Joshua Waitzkin, the inspiration for the movie “Searching for Bobby Fischer,” and finished second in a national high school tournament in 1992. He attended the University of Maryland before transferring to John Jay College and earning his degree in criminology.

Francis Idehen, whose family moved to Harlem from Nigeria when he was young, recalled how Mr. Robinson helped him acclimate to life in a new country.

“We ultimately became best friends, and I never really even understood it at the time, because I was the odd African kid with the funny accent and funny haircut,” Mr. Idehen said. “But he was just very kind. He was my first friend.”

Mr. Robinson’s father had been the one to push him to learn chess, recalled his oldest sister, Stacey Smith. “When we visited my grandmother’s house, my father would have the chessboard ready, and they would just go right into it,” she said.

The Raging Rooks came of age in Harlem during the late 1980s and 1990s, when crack and crime were surging in New York. Mr. Robinson and his mother, Ruth, lived a block away from four crack houses, she told The Times in 1991. Chess, however, “was a Camelot,” said Kasaun Henry, the captain of the Rooks who used to arrive at school an hour early to practice and avoid trouble on the street.

“There was a sanctuary when we’d get into that classroom,” Mr. Idehen said. “We’d sit around the chessboard while Maurice instructed us. Chess was pretty much all that mattered in those moments.”

As an adult, Mr. Robinson became a teacher for some of the better players in the city and helped inspire a whole new generation.

“He’s a big reason why I teach chess today,” said Chris Johnson, now a chess instructor at Success Academy Hudson Yards. He added: “Every week, when he would come to the school, we would look forward to it — not only because he was teaching us chess, he knew the culture. He knew the language. So he would always compare it to music or sports or different things like that.”

Mr. Robinson was proud of his Harlem roots.

“The cultural identity, the uniqueness, the pride, the talent, the history. It’s just a unique place,” he said on a video on YouTube. “If I was to do it all over again, I’d start right in Harlem again. I wouldn’t be who I was if I didn’t live here. Of course, back then, you had to watch your back, but I think it just made you tougher.”

People who were taught by or taught alongside Mr. Robinson remember how he often mixed hip-hop phrases with chess terminology.

“He never gave up his phraseology,” Mr. Henry said. “That was authentic, man. And that’s why he was one of the greatest ambassadors for chess, particularly for kids in Harlem.

“He is the proof,” he added. “Charu was the founding primary source that offering opportunities to Black kids in the hood can work.”

Mr. Robinson would often visit Success Academy’s main office seeking use of the corporate credit card to pay for tournaments. “He paid for them to go to every tournament available to them, and you best believe he’s not coming back on Monday empty-handed,” said Nana Alawiye, the school’s business operations manager. “If you see our trophy shelf, it’s ridiculous. And most of it is chess.”

Mr. Henry recalled a time as teens when he and Mr. Robinson anticipated seeing their teacher, Mr. Ashley, play a match against one of the local masters in the park. “That was like tickets to a Madison Square Garden Knicks game,” Mr. Henry said. In return trips to the park years later, Mr. Henry and Mr. Robinson, and Brian Watson, another member of the Rooks, became the draw. “Whenever they came to the park,” Mr. Matthew said, “they were celebrities.”

Upon Mr. Robinson’s death, Mr. Ashley scrolled through their text and Facebook message history. He was struck by the recurrence of a story that Mr. Robinson said had become a mantra whenever he faced adversity.

Late in the 1991 national tournament, the Raging Rooks needed to win three of their final four matches to ascend the leader board. After Mr. Robinson played an especially challenging game and won, Mr. Ashley shook his hand, looked him in the eye and repeated, “Good chess. Good chess.”

US ‘conducts operation against IS chief’ – reports