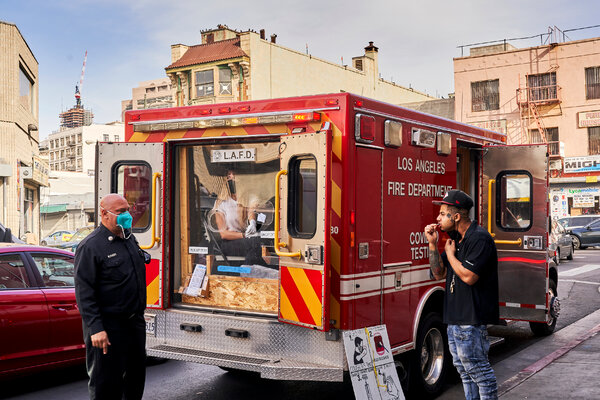 The numbers jump off the page. In the first week of this year, Los Angeles County recorded 950 deaths from the coronavirus — four times as many deaths as San Francisco has had during the entire pandemic.

As my colleagues and I write in an article about the winter surge, California is having two distinct pandemics, north and south. By nearly every metric — hospitalizations, cases per capita and deaths — the pandemic is much worse in Southern California.

This was not always the case.

Dr. Bob Wachter, a professor and chair of the department of medicine at the University of California, San Francisco, said the summer surge saw the first divergence and the winter surge had brought an even greater dichotomy, a trend that he said was puzzling.

There are only theories about what lies behind the divergence. San Francisco has higher average household incomes than Los Angeles, giving people more resources to protect themselves. The tech industry allows more people to work from home. But Dr. Wachter said those differences alone did not provide a full explanation.

“I think it’s more in the overarching cultures of the places, the willingness of people to buy the science and to do what they are being told is the right thing to do,” Dr. Wachter said.

Rosie Cornwell, a science teacher who moved from San Francisco to Koreatown in Los Angeles in October, said she immediately noticed differences in the way the pandemic was being handled.

In San Francisco, she said, she saw multilingual information posted everywhere advising residents to protect themselves from the virus and information about free testing sites.

“There was a lot of information not just online but printed on the street,” Ms. Cornwell said. “I haven’t seen that to nearly the same degree in L.A.”

Mask wearing is also more prevalent in the Bay Area, she said.

Joey Nygaard, a musician, lived in Los Angeles, moved back to San Francisco for the spring quarantine and then went back to Mid City, in Los Angeles.

“There are a lot less people who are able to work from home here,” he said of Los Angeles. “A lot of people commute to their jobs.”

He said the vast size of Los Angeles forced people to circulate more, and farther from their homes.

Tenzin Seldon, 31, a San Francisco resident who works for a tech start-up, said he felt a sense of “psychological safety” in San Francisco because of the mask wearing and social distancing.

On Friday, baseball lost one of its most colorful characters. Tommy Lasorda — who became synonymous with the Dodgers, managed them for 21 years from 1976 to 1996, won two World Series, served in a series of roles for the team and is in the National Baseball Hall of Fame — died of a cardiopulmonary arrest at his home in Fullerton, Calif. He was 93.

Lasorda was a style of manager now absent from the modern game. He was a motivator, a showman, a baseball philosopher, and he was renowned for his sense of humor — and his potty mouth.

“He was a firebrand and wanted to win at all costs,” Doug Rau, 72, who knew Lasorda’s fiery personality well, said by phone on Friday evening. He added later, “He was relentless, to say the least.”

“I spent many, many, many hours — and many practical jokes and pranks — with him,” Rau said. “We had that kind of relationship with Tommy where we can air it out and then the next day go to dinner together.”

One such indelible moment came during the 1977 World Series against the Yankees in which Rau and Lasorda engaged in a heated, obscenity-laden exchange that has lived on, along with Lasorda’s other classic tirades, thanks to YouTube.

The Dodgers trailed that best-of-seven series by two games to one, and Rau was pitching poorly. Lasorda was wearing a microphone for the broadcast, and was swearing up a storm before he emerged from the dugout to remove Rau from the game.

Embarrassed and furious, Rau lobbied to stay in. It didn’t go well, with seemingly every other word out of Lasorda’s mouth being an expletive, as teammates tried to diffuse the situation.

“I may be wrong but that’s my job,” Lasorda said to Rau, with some additional words that can’t be printed. “I’ll make the decisions here.”

Laughing about the incident now, Rau said he had no idea Lasorda was wearing a microphone.

“Even though he probably knew he was mic’d up, Tommy probably forgot about it,” Rau said. “People used to sit in the seats right next to our dugout just to listen to Tommy talk about the game and the various expletives that he used. It was very effective. There was nothing unusual about that conversation on the mound in ’77.”

The Dodgers went on to lose Game 4, 4-2, and the World Series in six games.

Stashed at his home in Texas, Rau said he has a few cassette tapes of Lasorda’s colorful clubhouse meetings “that would go golden if I released them.” But Rau had no plans to release them.

There is plenty from Lasorda on the internet already anyway. — James Wagner

Calgary restaurants offering Easter dinner you can eat at home