Home » Americas » A Summer Camp on the Border, Where the Border Crisis Feels Far Away

EDINBURG, Tex. — The Hawks wore blue. The Foxes were in green. The teams gathered outside in the pit, in the shade beneath a collection of trees. The dust was soon flying in a game of gaga ball, a summer camp staple that is a fast-paced, low-slung version of dodgeball, and the campers were having too much fun to ponder the what-ifs.

In this case, if the Presbyterian Mo-Ranch Assembly camp, based in the Texas Hill Country, had not traveled five hours south to them, these teenagers would not have attended.

Growing up in the summer of 2019 on the Texas-Mexico border, in the shadow of migrant shelters and amid a rolling national conversation about immigration, is to grow up with a stigma. These teenagers see, hear and feel the stereotypes: They must be poor. They or their parents must not be in the United States legally.

But like the border region itself, they are much more than a headline. Many of the older campers have parents who are in the country legally but either cannot afford the Hill Country camp or cannot make the trip because of their work schedules.

Several years ago, the head of the Presbyterian Mo-Ranch Assembly, a popular 500-acre Christian conference center west of Austin and north of San Antonio, asked a few pastors from the Rio Grande Valley why children from that region never attended its summer camp.

The answer stunned him: border security.

The United States Border Patrol operates traffic checkpoints on major highways in the Rio Grande Valley and other border communities, asking drivers and occupants of vehicles whether they are American citizens. Undocumented residents have missed college graduations and skipped hospital visits to Houston, San Antonio and other more northern cities in the state because they did not want to risk passing a checkpoint.

So for the past four summers, a version of the Hill Country summer camp has been taken to South Texas. The first year, 36 campers registered. This summer, 62 attended, the majority of them Hispanic, and many of them the children of migrants. 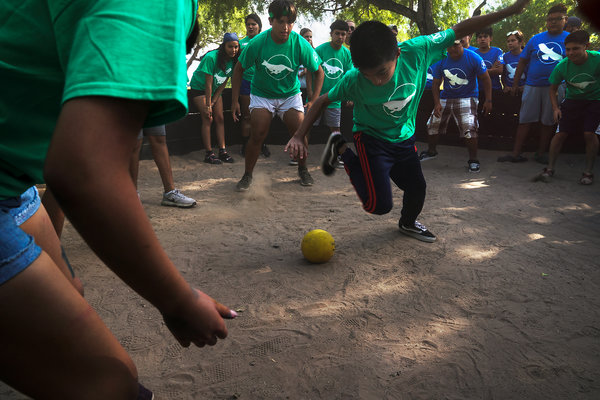 “As a Christian, we believe that everyone — everyone — is a child of God and created in God’s image,” said Dick Powell, president and chief executive of Mo-Ranch. “I can’t allow some artificial barrier to separate our mission and ministry. They may not be able to come north, but we can go south.”

This year’s Rio Grande Valley version of the camp started in late July, one week after the Trump administration began a series of coordinated immigration raids across the country. The raids never turned into the large show of force many expected, but the threat struck fear in many immigrant communities.

Mr. Powell and Richard Bombach, Mo-Ranch’s director of camps, said the families of nearly 20 campers canceled at the last minute, and some of the parents said they were afraid of being picked up in the sweep.

But during this camp, at a rustic 23-acre retreat center on the outskirts of Edinburg, a town just north of the border city of McAllen, the immigration debate felt like something playing out far away.

“Our lives outside of here are kind of stressful, but being here, it’s way different,” said Mia, 17, who lives in Brownsville, Tex., another border city in the Valley. “You can be yourself.”

Camp officials asked that the last names of the teenagers not be published to protect their privacy.

Vanessa, 17, said she often heard helicopters overhead at home in Progreso, Tex., where a bridge connects Mexico to South Texas. “I live right next to the border,” said Vanessa, who will be a senior this fall at Progreso High School. This was her third Mo-Ranch camp, and last summer, she won the coveted 5C award — named for earning top scores in Christian living, creativity, critical thinking, communication and collaboration.

Vanessa wants to serve in the Army, like her father. But first, she wants to spend next summer as a counselor at both the Hill Country and Valley Mo-Ranch camps.

There are people in Vanessa’s life who she is trying to prove wrong, she said, people who look down on her — and let her know it.

“Patience,” Vanessa said of the one thing she learned this summer. “I learned how to forgive people, even though they give me the hardest time. I just can’t hate anymore because this camp taught me so much.”

The camp helped Isaac, 16, in many ways — the spiritual energy, the friendships, the affirmation and confidence that he has what it takes to become a dentist. But there was one other: It gave him a break from work.

Isaac works at a Subway restaurant in the border town of Los Fresnos, where he will be a high school junior in the fall. His mother, a clerk at a local courthouse, is raising him and his sister. “It’s been great, honestly, being able to not have to focus on work,” Isaac said. “Just having my mind on being able to relax, and just being able to connect with God.”

Although the original intent was to provide a Christian summer camp experience for the children of undocumented migrants, the Mo-Ranch staff does not pry into the immigration status of the campers and their parents.

“If kids are going to open up to their counselors, then we encourage it, we love it and we’re open to it, but we’re not going to just sit and ask them, ‘What is your family’s citizenship status?’” Mr. Bombach said. “We do want to give them this opportunity to be in a bubble, to be in this awesome bubble where for this one week they don’t have to worry about anything else going on in their families or in the area.”

Campers are not allowed to bring their phones. Forced to rely on one another and their college-age counselors using old-fashioned face-to-face communication, the bonds form quickly and tightly.

But, she said “you have to keep moving forward, and be like, ‘Oh no, I’m different. I am going to make it to college. I am going to be someone in life.’”

This summer, she took some of the younger children under her wing and at times acted more like a counselor than a camper, sitting with them at meals and making sure they felt included. Mr. Bombach was so impressed, he gave her his camp director pin. She wore it proudly.

Madeline Stanford, 21, a counselor, said campers at the Mo-Ranch in the Hill Country often take the experience for granted. “The difference is that here, these kids will get up and they’ll do stuff without even you asking,” she said. “They have this want to be here.”

One teenager said his parents sold chicken plates to raise money for the camp. Another camper’s shoes were so old he was having problems with his feet, so the staff bought him a pair of new sneakers.

Nationwide, the average fees to attend so-called residential camps range from $630 to more than $2,000 per week, according to the American Camp Association. The four-county Rio Grande Valley is one of the poorest regions in the nation. In Edinburg’s Hidalgo County, 31.8 percent of the population lives below the poverty level, a rate worse than Chicago’s Cook County (15.9 percent), Los Angeles County (17 percent) and New York’s Bronx County (29.7 percent).

The Mo-Ranch camp in the Valley is purposefully low-cost: The fee per camper is $25. The weeklong camp costs Mo-Ranch about $51,000. Mr. Powell raises the money from donors, most of whom are Presbyterians in Texas, he said.

Summer camp is the sum of small moments.

Dancing to “Footloose,” the Kenny Loggins tune, in unison. Ms. Stanford, the counselor, tossing packets of ranch dressing onto the table during a pizza dinner and asking, to delayed chuckles, “Does anyone want some Mo-Ranch?” Vanessa nailing a trick shot in the pool: catching a basketball thrown to her as she went down a slide and then tossing it into the hoop on the other side of the pool a split-second before she hit the water.

At a worship service on the last night, campers and counselors gathered to pray and sing. A group of older campers formed two lines and faced one another. One by one, while holding hands, they said something they appreciated about the other person.

There was an outpouring of emotion: a kind of public affirmation of their value as campers, counselors and humans. “You give us a reason to be happy,” Caleb told Ms. Stanford.

Within minutes, Clara was in tears. Her best friend, Mia, and her 17-year-old sister Isabel were with her, but on this last day, she felt just as close to many others, some of whom she had just met at camp.

“I know I’ve just known them for like a week, but I feel like they’re like family to me,” Clara said. “It feels like a long time because of the trust and the bond that you have and that you create with these people.”

Manny Fernandez is the Houston bureau chief, covering Texas and Oklahoma. He joined The Times as a Metro reporter in 2005, covering the Bronx and housing. He previously worked for The Washington Post and The San Francisco Chronicle. @mannyNYT