Home » A Teenager Was Bullied. His Ancestors Saved Him.

In March 2008, Dennis Richmond Jr. watched “Roots” with his father, and it changed his life. It was a Sunday, the Richmonds’ day for leafing through family photographs in their apartment in Yonkers, N.Y., looking at relatives going back about a century. “Roots,” Alex Haley’s semifictional account of his family’s journey from West Africa, posed a challenge: How far back could young Dennis trace his own ancestors?

After watching the mini-series’ first DVD, he ran upstairs to ask his mother about the names of her relatives. Then that evening, Dennis, a studious 13-year-old, went on the family computer and found a 1930 United States Census entry for his maternal great-grandmother. The listing included the name of her father, Brutus Bowens, born in 1889 in South Carolina.

“That just did something for me,” Mr. Richmond said. “That’s where the story begins: St. Stephen, South Carolina.”

Mr. Richmond, now 26, a writer and substitute teacher, is the kind of person who begins sentences, “I was born in 1995,” or “My father was born in 1955.” When he thought about his grandmother having parents, who in turn had parents, he was floored. “It blew my mind,” he said. “The seed was planted. And I’ve been steadfast ever since.”

The study of genealogy conjures a pyramid, with a common ancestor at the top and successive generations fanning ever wider into the present. But in practice the pyramid is also inverted, with the genealogist a solitary point at the bottom, tracing the connections upward through ever wider generations (two parents, four grandparents, etc.). To the genealogist’s question ‘Where do I come from?’ the answer eventually becomes: everywhere.

For Dennis, finding his ancestors became a refuge from his school life, where classmates bullied him both physically and verbally for his studiousness and the way he carried himself.

It was also a plunge into a history full of painful chapters, including Jim Crow and slavery. His father, Dennis Sr., had told him of riding trains to the South as a child, seeing water fountains labeled “white” and “colored.” But his father did not worry about what his son might find.

“We didn’t try to hide anything from him,” the elder Mr. Richmond said. “Whatever happened in the past to the relatives, that’s what made him him and me me. All of those experiences together made us as human beings.”

The relatives on his father’s side had owned cameras for more than a century, leaving a pictorial record of New England life going back to the 1890s. Dennis dug into Ancestry.com's databases and then started visiting local libraries and historical societies. A great-uncle shared with him a family Bible that had belonged to his own great-grandmother, who was born into slavery in 1865, just before Emancipation.

That’s how near the past was, Dennis realized.

“I knew, wow, I have slaves in my family, and I would like to know who they are,” he said. “It was an amazing pastime for me. It kept my mind off the fact that I knew that Monday morning I would have to go back to school and get bullied again.”

The search was not just for ancestors, but also for the stories they chose not to pass down because they were so traumatic. Genealogy, after all, is a study of forgetting — sometimes forced by circumstance, sometimes protective. Dennis’s great-uncle, John Sherman Merritt, said it had been very difficult to get information from his elders, especially the great-grandmother who had been born before Emancipation and grew up during Reconstruction.

“She was a lady of very few words — ‘yes,’ ‘no,’ and that was basically it,” Mr. Merritt said. “Back then, our folks were really quiet about what happened. Nobody gave you a real answer about what happened, but I’m sure she went through a lot.”

Dennis taught himself on the fly, learning how to search for records from YouTube videos and the Riverfront Library in Yonkers. Through his searches he came across the work of a fifth cousin, Teresa Vega, a generation older, who was already engaged in a rigorous study of their ancestors from her apartment in Upper Manhattan. Ms. Vega, who lectures regularly about genealogy, felt he was too quick to draw unproven connections, not following the careful protocols of professional genealogists. She schooled him harshly when he made mistakes.

“I didn’t know how young he was,” she said. “I had to apologize. We talked it out. We’re collaborators now.”

His father, Dennis Sr., knew that there were family mysteries to be unraveled, though he had not tried to unlock them himself. Many of his relatives“don’t look like they’re of African descent,” he said. “Just visualizing our family, you can see that there’s a relation to different ethnic groups.” 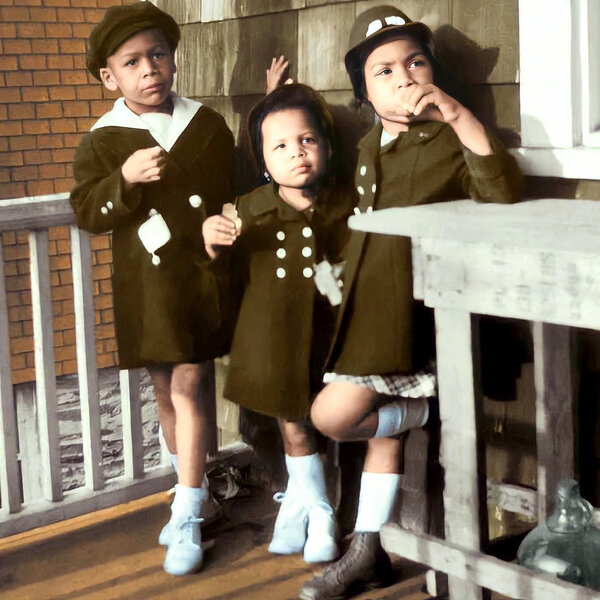 The younger Dennis’s search took him through the Ancestry website’s records and to Greenwich, Conn., which in the 19th century had both free and enslaved people of African descent, including his father’s ancestors. The hub was a Black and Indigenous settlement called Hangroot, named for the root cellars where owners hung winter vegetables to keep animals from eating them. Many residents had crossed from New York, where fugitive slave laws were more rigidly enforced, said Sheri Jordan, executive director of the Rye Historical Society. At least one resident was lured back across the border to New York and “kidnapped and sold south,” she said.

Hangroot was a community once vibrant, but largely lost to history; its Black and Indigenous residents were mostly gone by 1910 — “gentrified out,” said Ms. Vega, by the twofold pressure of white immigrants and the arrival nearby of the Rockefellers. When a relative gave Dennis a photograph from around 1899 showing his great-great-grandfather as a boy in Hangroot, it put a face on an ancestor and a community Dennis knew only from documents.

“I was stunned,” Dennis said. “I didn’t think those pictures existed.”

He shared it with Ms. Vega, who wrote in her blog, “We shall be erased no more.”

Dennis learned about the great-great-grandfather in the photograph, how he worked himself to death at 31, and about his mother, born in 1871 in Virginia, the daughter of enslaved parents, who wrote poems that were published in newspapers.

“You could have knocked me down with a feather,” he said. “This woman who cleaned houses for white people, whose parents couldn’t read or write, taught herself to write poetry.”

At Little Bethel African Methodist Episcopal Church in Greenwich, he saw a large stained glass window that she had donated. “I was astonished,” he said.

Against his difficulties in school, his ancestors became role models. “Because grandpa John died of exhaustion, if I’m not dying from working hard, then why wouldn’t I continue to work hard?” Dennis said. “If I know that one of my ancestors couldn’t read and write for a few years because of the circumstances they were born into, but taught themselves how to do it, why wouldn’t I go online and look up a word that I didn’t know? So I’m learning from these stories. I’m not just finding these things out. They’re empowering me.”

He became more outgoing in school, even running for class president, unsuccessfully. When classmates showed little interest in genealogy, he traced family trees for his teachers and elected officials.

The records in Greenwich and nearby Rye, N.Y., were unusually thorough and intact, going back to the 18th century, rare for records of enslaved people. Finally, an archivist at the Rye Historical Society found a bill of sale that Dennis realized referred to his sixth great-grandmother, Margaret Lyon, known as Peg, dated July 7, 1790. For the sum of “Fifty Pounds of New York Money,” she became the legal property of Nathan Merritt Jr., after whose family the Merritt Parkway in Connecticut is named.

The document was “highly unusual, because she was named with a first and last name,” Ms. Jordan said. “It wasn’t just ‘slave girl Peg’ or ‘slave girl Rose.’”

For Mr. Richmond, who was 21 at the time, it was an eye-opening find — to hold in his hands a document that his ancestor would have been unable to read.

“It made the history real,” he said. “People think this happened so long ago. But I sat there holding the receipt. I’m holding it knowing it’s my ancestor. It was surreal. Most young Black men cannot do what I did, touch a document that goes that far back that they know is their ancestor. I know the names of the men who owned Peg, and the man who freed her in 1800.”

But it was just a start. Through DNA testing on numerous branches of the family, Mr. Richmond and his cousin Ms. Vega said they were able to determine that Peg bore at least one child — Mr. Richmond’s fifth great-grandfather, who was born into slavery — with a member of the white Merritt family that enslaved her.

Ms. Vega took the genealogy back a generation further. Peg Lyon, she found, was herself fathered by a man from the family that sold her to the Merritts, the Lyons, a comparably prominent family whose name is given to a park in nearby Port Chester, N.Y. Again, DNA testing confirmed her research.

She followed a family trail to Christine Varner, a Lyon descendant still living in Connecticut. Ms. Varner, who is white, said she always believed she might have relatives of African descent. Then Ms. Vega called.

“I didn’t know how to react,” Ms. Varner said. “Teresa immediately took hold. She said: ‘The last thing I want to hear from you is that you’re sorry. You had nothing to do with it.’ We became friends.”

Meeting Ms. Vega and another relative of mixed race, Ms. Varner said, “was like knowing history truthfully. My father always embraced the idea that we were probably related to people who weren’t white.” In her childhood, her mother had taken her to the old African-American and Native American cemetery to place flowers on the graves. Now she understood why.

At their first meeting, at the Town Hall in Greenwich, Ms. Varner gave Ms. Vega an earthenware jug that had been in the family since the 1700s. “Teresa said, ‘Thank goodness you didn’t give me 40 acres and a mule, because the doorman wouldn’t let the mule in,’” Ms. Varner recalled with a laugh. “That’s the kind of relationship we have, very honest and open. I learn more and more, and now I’m not as ignorant.”

Not all relatives have been as welcoming, Ms. Vega said. “I have a stalker on the Lyon side who said, ‘How dare us colored people say we’re related to her Revolutionary War-era ancestors?” she said. “I tend to deal with folks who want to deal with us.”

Mr. Richmond said he had not tried to contact his white relatives on the Merritt side. “I would love to know how it would be perceived,” he said. “Often, people say, ‘We’re all related.’ But when you can actually put names and documents and places with that, it tends to get a bit sticky.”

In the meantime, he said, his genealogy had given him a view of Black history far different from the one he’d learned in school — one that included Northern families like the Lyons and Merritts, Black and white, living in the same community for generations. During the pandemic, he wrote and self-published a book that included his adventures in genealogy, “He Spoke at My School.”

“And then you speed up hundreds of years,” he said, “and you have Dennis.”

Baby boom to breakups: Here’s how COVID-19 is testing relationships