It’s Wednesday. We’ll look at the legacy of the Attica prison uprising, which ended 50 years ago this week with an armed assault ordered by then-Gov. Nelson Rockefeller. 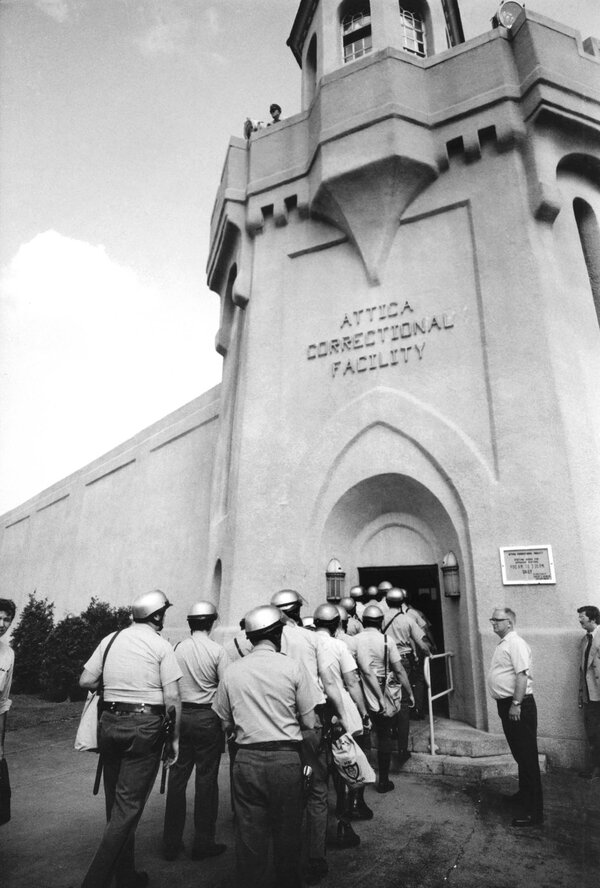 Jumaane Williams, New York City’s public advocate, walked through the notorious Rikers Island complex on Monday and warned that a debacle like the revolt at the Attica prison in 1971 could play out at Rikers, and soon.

“We were all in danger in there,” he said after the tour, promising to call Mayor Bill de Blasio and Gov. Kathy Hochul and describe what he had seen.

The mention of Attica may have been deliberate: Monday was the 50th anniversary of the blood bath that ended the four-day uprising at that state-run maximum security prison 350 miles from New York City. The armed assault by state troopers and prison guards left 43 people dead, including 10 guards and civilian prison workers who had been held hostage by prisoners for four days.

Attica gave life to the modern prisoners’ rights movement even as it faded from public consciousness. It has become little more than a footnote from a time when the nation was divided by the Vietnam War and emotionally scarred from the assassinations and civil unrest of the 1960s. Later generations watching Al Pacino’s “Attica! Attica!” rant in the 1975 bank-robbery movie “Dog Day Afternoon” might wonder why that word energized the crowd.

In the immediate aftermath of the assault to retake the prison, New York officials lied to the public and the press. Officials wrongly blamed the inmates for killing the hostages, saying the prisoners had slit their throats. Autopsies showed the victims had been shot. Only the guards had had guns.

Attica, built in the 1930s, was overcrowded in 1971, with more than 2,200 inmates. Elements of daily life that might seem inconsequential to outsiders had fanned tensions: inmates were limited to a single shower a week and a single roll of toilet paper a month. They received only mail written in English because that was the only language prison censors could read. Letters in other languages were routinely thrown in the trash.

The head count in state prisons, which exploded in the 1980s, has fallen in recent years. The state now has just over 32,000 inmates, about half as many as in 1999, when the prison population peaked. Last week, Attica had 1,635 inmates.

A spokesman for the state Department of Corrections and Community Supervision said that the Attica of today is “markedly different from the New York State prison system in 1971” and that the agency had made “significant changes to more humanely supervise and prepare incarcerated individuals for a successful release back to the community.”

But conditions at Attica remain a concern for prisoners’ rights advocates. Karen Murtaugh, the executive director of Prisoners’ Legal Services of New York, which was set up after the Attica uprising to provide representation for prisoners, said conditions had improved since 1971, but added: “I’m not sure they’ve significantly improved.”

Soffiyah Elijah, a former executive director of the Correctional Association of New York, a nonprofit prison monitoring group, said that “immediately in the aftermath of the Attica rebellion, there were some improvements for a while, but the racism that existed in the state prison system still exists today.”

“Shamefully,” said Ms. Elijah, now the executive director of another nonprofit group, the Alliance of Families for Justice, “we have not made much progress at all.”

The legacy of Attica

In 2005 — 34 years after the uprising — Elizabeth Fink, the principal lawyer for nearly 1,300 inmates, said that “Attica was over, except it’s never over.” This was just after the state had agreed to pay $12 million in compensation to families of prison workers killed or injured when the state troopers stormed in. That was the same amount that prisoners had won in their class-action suit against the state five years earlier.

Then, in 2016, the reporter Tom Robbins, along with Michael Winerip and Michael Schwirtz of The Times, looked at 28 demands from the prisoners in 1971. They found that reforms promised then had never been carried out or had been scaled back.

But the Correctional Association said many Attica prisoners get only two. They can take a third shower in the yard, but a memo the association sent after a visit to Attica said that yard showers were “not a viable option” because of cold weather, long lines and resistance from corrections officers who have to unlock the shower stalls.

That pointed to what prisoners’ advocates describe as continuing tension between inmates and guards. The Correctional Association said after a 2019 visit to Attica that inmates had complained about “sticks out,” a gantlet of corrections officers lining the halls, batons up, when prisoners are being moved from their cellblocks to the yard or other parts of the prison.

Inmates are now given electronic tablets they can use to communicate with relatives on the outside, not by email but by a separate messaging system. The tablets do not connect directly to the internet, though prisoners can pay to download some videos and e-books. But Jessica Scaife, the executive director of the Correctional Association, said there had been problems with the software and substandard content.

Another difference now is video surveillance cameras. Nearly 2,000 have been installed in Attica since 2014 “to help both staff and the incarcerated population.”

John J. Lennon, who spent nine years of a 28-years-to-life sentence at Attica, wrote in a 2018 article for The Marshall Project that the cameras “seem to have accomplished what once seemed impossible at Attica,” taming “a violent us-against-them culture.” He wrote that assaults on staff members plummeted nearly 80 percent after the cameras were turned on and that staff injuries dropped 40 percent.

One of the promises from 1971 was to pay inmates the state’s minimum wage for work they are assigned to do.

That has not happened, said State Senator Zellnor Myrie, a Democrat from Brooklyn who has proposed a minimum wage measure for inmates. He said in an interview that pay can range from 50 cents an hour to $1.25 a day. “Really unacceptable wages,” he said, adding that the last time they were raised, in the 1990s, Mario M. Cuomo was governor.

It’s going to be another sticky, mid-80s day, and the chance of showers and thunderstorms will continue. Have an umbrella handy through Thursday.

A new bipartisan commission is drawing up district lines, but New York Democratic leaders are laying the groundwork to take over the redistricting process.

More than a dozen members of the Colombo crime family were charged in a sweeping labor racketeering case.

Brought on by the increase in vaccine mandates, there’s a booming market in the city for fake vaccine cards, New York Magazine reports.

Cyclists rejoice: amNY reports on the opening of the Brooklyn Bridge bike lane.

With a downsized guest list and an “American Independence” dress code, the Met Gala returned.

Steps of the Met

I was walking off a full day spent in front of screens, reacquainting myself with the outside world and natural light.

As I wandered down Fifth Avenue toward the Met, a full moon was coming up and a summer breeze tugged at the archway of trees. It was a remarkable improvement from three hours earlier.

A lone accordion player was swaying to his music at the bottom of the museum steps. He seemed to be enjoying his evening so much that I sat down to do the same. The notes of “Can’t Help Falling in Love” floated through the air, overlaying the rush of the fountains.

If he was aiming for tips, he had certainly picked a sparse time of day. But as he played, an older couple paused, and then stopped. The doormen across the street edged closer. Three teenagers dropped down on their skateboards.

Eventually, the accordion player waved good night to the security guards. He loaded his instrument into the back of a parked cab. Then, he got into the driver’s seat and turned the light on.

Down the next block, a woman in heels flagged him down.

Glad we could get together here. See you tomorrow. — J.B.