With just over four weeks left before the New York mayoral primary — and with in-person early voting set to begin on June 12 — the leading Democratic candidates are racing to distinguish themselves in an election that has so far remained relatively static, according to the limited polling available.

The two front-runners, Andrew Yang and Eric Adams, both made news this week, but for different reasons: Mr. Yang, a former presidential hopeful, made a series of gaffes that seemed to highlight one of his critics’ most frequent complaints — that he has parachuted into the mayor’s race with little knowledge of the city and no government experience.

Meanwhile, Mr. Adams, the Brooklyn borough president, continued to gain steam, picking up a critical endorsement from one of the city’s most powerful Latino politicians and gaining the lead in another public poll.

Adams gets second dibs on an influential endorsement

A scramble ensued, with several leading candidates courting Mr. Espaillat for his endorsement — a rush that ended Sunday when Mr. Adams traveled to Washington Heights, in the heart of Mr. Espaillat’s district, to receive the congressman’s formal embrace.

Mr. Espaillat said he got into politics after witnessing someone shot in the head on a city street. Gun violence is again on the rise in New York City, and Mr. Espaillat said he is endorsing Mr. Adams, a former police captain, because “we don’t want that happening again.”

“For Eric, the Espaillat endorsement, this is better than mangú,” said Eli Valentin, a political analyst for Univision, referring to the Dominican dish of mashed plantains. “I don’t think there’s anyone else among Latinos that has that influence within the Latino electorate.”

The Latino vote is estimated to make up 20 percent of the Democratic primary vote, Mr. Valentin said. The congressman’s backing is expected to matter more than that of many other powerful city politicians, in part because it comes with Mr. Espaillat’s team of loyal supporters who can help get out the vote.

“At a time when the machine style of politics has been waning, Mr. Espaillat has built a machine of his own that can move votes,” said John DeSio, who once directed communications for the Bronx borough president, Ruben Diaz Jr. 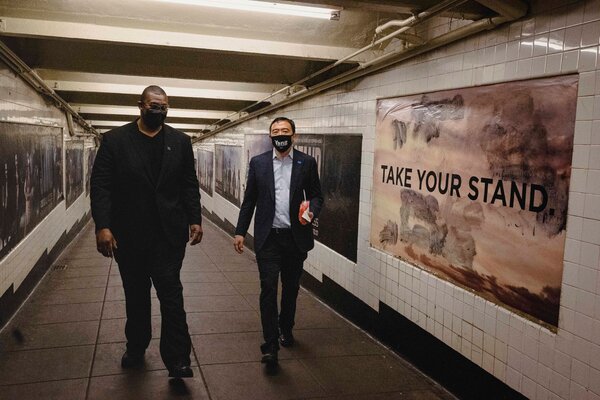 Mr. Yang has characterized himself as a political outsider, someone who will not be beholden to special interests and who would be open to new ways of getting things done. Although he has been leading in many polls, that outsider image has inspired criticism that he doesn’t know enough about New York to be mayor.

That critique came into focus last week when Mr. Yang fumbled or didn’t know the answers to several questions about city government and policy.

On Thursday, Julia Marsh, a reporter from The New York Post, asked if he agreed with last year’s repeal of 50-a, a law that shielded the disciplinary records of police officers from public view.

Mr. Yang stumbled over an incorrect response before Edwin Raymond, a New York Police Department lieutenant who is running for the City Council, explained the law.

On the same day, Mr. Yang said during a forum on homelessness that it would be “extraordinarily helpful” to “have specific shelters for victims of domestic violence who are often fleeing from an abusive partner and is a distinct population with distinct needs.”

The moderator, the NY1 anchor Courtney Gross, quickly pointed out that there are already a number of domestic violence shelters in the city, but that the issue has been capacity.

Earlier in the week, Mr. Yang was also criticized for his proposal for the city to take control of the subway and bus system, which some saw as being light on details.

Chris Coffey, Mr. Yang’s co-campaign manager, said Mr. Yang misspoke when addressing domestic violence shelters and that he had been briefed on the issues around 50-a several times. Mr. Coffey said his candidate understood the issues, but that doesn’t mean he knows “every piece of terminology or the debt limit for the M.T.A.”

How ranked-choice voting could play out

Under ranked-choice voting, winning the most votes in the first round does not necessarily mean a candidate will win the election — contenders near the top could still triumph if they get more second- and third-choice votes than the first-round winner.

That could conceivably happen in next month’s Democratic primary. A new poll by Public Opinion Strategies for the Manhattan Institute, a conservative think tank, shows how the winner could be determined in 11 rounds with surprising twists and turns.

Ranked-choice voting will allow New Yorkers to rank up to five mayoral candidates in order of preference. The Board of Elections will eliminate the last-place finisher among the candidates. If a voter’s first choice was eliminated, then their second choice vote will be counted. And so on until a winner emerges.

In the poll, Mr. Yang received the most votes in the first round, at 22 percent, followed closely by Mr. Adams. But once voters’ ranked choices were tallied, and candidates with less support were cut, Mr. Adams came out on top with 52 percent of votes, compared with 48 percent for Mr. Yang.

Coronavirus may cause temporary meat shortages. But higher prices will last longer