WASHINGTON — In a video posted on Facebook, Couy Griffin, the founder of a group called Cowboys for Trump, bragged that he had a “first row seat” to the riot at the Capitol on Jan. 6 and considered returning for another rally in which he imagined “blood running out of that building,” the F.B.I. said. Later, he told the F.B.I. that he hoped the next demonstration would be nonviolent but there was “no option that’s off the table for the sake of freedom.”

He was arrested before he could hold another rally on Inauguration Day as he planned. But first, he returned to his post as an Otero County commissioner in southern New Mexico, where an effort to oust him has now gained new steam.

Mr. Griffin “leapt right into sedition,” said Paul Sanchez, a Republican who is leading a committee that hopes to recall him. “His focus is not at all on Otero County.” 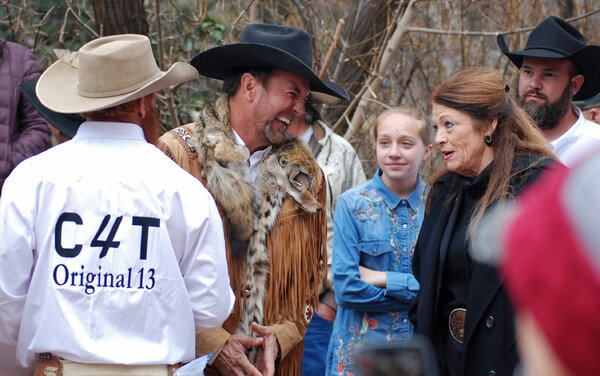 Mr. Griffin, who has been charged with trespassing at the Capitol, was not unlike many others there that day: He had a deep allegiance to former President Donald J. Trump and a belief that the election was rigged. He is also among at least 19 elected officials from across the country now under heightened political scrutiny back home because they attended the president’s rally and, in some cases, stormed the Capitol building along with a mob that became violent in its effort to stop the vote that would make President Joseph R. Biden Jr.’s election official.

Their critics say government officials had a particular duty not to endorse Mr. Trump’s baseless claim that the election was stolen.

In the weeks since the riot, state and local politicians, including some supporters of former President Trump, have worked to distance themselves from local officials who were involved. In some cases, local Republican organizations have condemned participants. Many elected officials, some of whom gathered in Washington that day but never entered the Capitol, are under pressure to resign. At least one state legislator has apologized for his involvement and stepped down.

“The problem is, how do you support someone who demonstrates the kind of judgment” to participate in the events of Jan. 6, asked Nick Corcodilos, a former Republican mayor in Clinton Township, N.J., who left the party around 2014. “How does one judge someone who attends a rally where a president urges his followers, his audience, to go to the Capitol building and commit violence?”

As for one of Mr. Cordocilos’ local county commissioners who posed in front of the Capitol on Jan. 6: “That’s not someone I want running my county or representing me.”

In addition to Mr. Griffin, a state legislator from West Virginia and a town meeting member from Massachusetts were among those who stormed the Capitol. Earlier in the day, at rallies urging Congress to overturn the Electoral College vote, the crowds included a state representative from Missouri, a City Council member from California, a state senator from Virginia, and an incoming Nevada assemblywoman.

In New Mexico, the Democratic attorney general has now vowed to seek Mr. Griffin’s removal, and his fellow county commissioners — two Republicans — have called for him to resign. The chairman of the state Republicans has said Mr. Griffin “does not represent” the state party.

Still, it does not appear that Mr. Griffin, who has been held in isolation after refusing to take a coronavirus test at a Washington jail, intends to willingly leave his post. His lawyer, David Smith, said in an interview that he had “no reason to think he’s going to resign from the commission.”

Among the most high-profile participants in the riot was Derrick Evans, a newly elected member of the West Virginia House of Delegates who filmed himself entering the Capitol. Gov. Jim Justice, a Republican, called Mr. Evans an “absolute idiot” and his actions “disgraceful.” Roger Hanshaw, the Republican speaker of the West Virginia House, said Mr. Evans would “need to answer to his constituents and colleagues regarding his involvement in what has occurred.”

“I take full responsibility for my actions, and deeply regret any hurt, pain or embarrassment I may have caused my family, friends, constituents and fellow West Virginians,” Mr. Evans said in a written statement.

Some Republicans have been careful to balance their continued support for Mr. Trump with condemnation of those who entered the Capitol. Roman Stauffer, acting chairman of the West Virginia Republican Party, said leaders in the state have condemned the actions of Mr. Evans. He also said his office had received a “tremendous amount” of messages calling for the state party to affirm its support for Mr. Trump, but it had received none about Mr. Evans.

In Natick, Mass., a petition that has gathered about 1,700 signatures, is calling for the ouster of Suzanne Ianni, an elected Town Meeting member, for her participation in the riot. But in a statement on behalf of the town select board, Jonathan Freedman, the chairman, said Ms. Ianni could not be recalled unless she is sentenced to prison for a felony conviction. In an interview, he said the board would not take a position on whether she should resign.

Even some elected officials who did not enter the Capitol on Jan. 6 are facing ire for their part in the events that day. Justin Hill, a state legislator from Missouri, said he traveled to Washington to hear Mr. Trump speak and to meet with Representative Jason Smith, a Republican of Missouri, about rejecting the Electoral College results. In the process, Mr. Hill had skipped his own swearing in ceremony.

He said he was frustrated that the media had given the impression that he was “at the riot” — when, he said, he only attended the former president’s speech. “It’s been absurd,” he said.

The Democratic Legislative Campaign Committee, which backs Democratic candidates for state legislatures across the country, has called for his resignation — along with that of at least 16 other Republican state legislators or legislators-elect, including Amanda Chase of Virginia, a state senator who is also running for governor.

Ms. Chase was recently censured by the Virginia Senate, in part for remarks she made about those who stormed the Capitol.

'One of my worst fears' – runner who wrestled mountain lion

The mental rigours of being US president