Home » Americas » After Centuries of Obscurity, Wilmington Is Having a Moment

WILMINGTON, Del. — The hometown of President-elect Joseph R. Biden Jr. has long wrestled with its image problem. Namely, it does not have one.

If people could find Wilmington on a map — and many couldn’t — they thought of it as a convenient pit stop along the Northeast Corridor, which was dominated by far larger, more important, more colorful places. It is a city lacking a well-known culinary dish, historical event, professional sports team or even a particular turn of phrase.

And yet, against dubious odds not unlike those that Mr. Biden overcame in reaching the presidency after three tries, Wilmington appears determined to ride the Biden wave to long-elusive glory.

“Usually, nobody pays attention to us, and now we are on the news every night!” exclaimed Karen Kegelman of the Delaware Historical Society, whose first memorable encounter with Mr. Biden dates back to when he spoke at her high school graduation. She is 53. 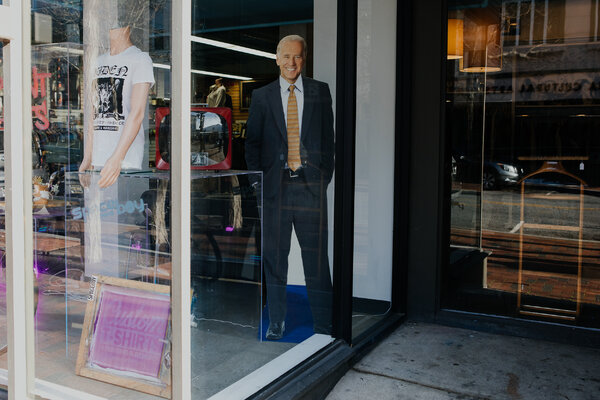 The president-elect has transformed the city into a federal-government-in-waiting. He delivers speeches and television interviews from the Queen, a restored theater downtown. His motorcade, 20 vehicles long, regularly brings traffic to a screeching halt, and gawking drivers appear delighted. Cabinet nominees swan through the opulent lobby of the Hotel Du Pont. Suddenly, all of Wilmington is bathing in the dizzying warmth of an unexpected spotlight.

“It creates a little mystique about the city,” Mayor Michael S. Purzycki said. “It creates great curiosity about the city — people coming by all the time wanting to know what is going on, tell me about your city.”

Mr. Purzycki harbors no illusions regarding the colorless reputation of his town: “Wilmington has always been on I-95 between Washington, Philly and New York, you know.” He compared its famously dull, corporate vibe to the unvarying “Mad Men” uniform worn by the legions of lawyers and chemical engineers who once populated its downtown: “a white shirt, a sincere tie and 12-pound wingtips.”

“It was not a creative culture,” he said. “It was pretty predictable, stay within the guard rails.”

The main mystery about the place seems to be identifying something, anything, that distinctly says “Wilmington.”

Ask residents to name a unique feature and the universal response is a long pause.

Others will point you to the Court of Chancery. It is not quite the Statue of Liberty or the Grand Canyon, but it is a singular institution in the United States.

Corporate titans use the specialized court to wage legal Armageddon to control stock shares, but companies must be registered in Delaware to present a case. Nearly 1.5 million are, including household names like Coca-Cola and Geico.

When Walt Disney Co. shareholders balked at the $140 million severance package paid mostly in stock options to Michael Ovitz in 1996 after he was dismissed as president of the company, for example, they tried to claw them back in chancery court and lost.

The court has been around since 1792, but try finding it. There is not even a sign for it outside the 12-story, steel and glass tower on North King Street that it shares with other courts.

There is a dark side, too. Secrecy laws allow foreign kleptocrats and other nefarious types to stash ill-gotten gains anonymously, though reform efforts are underway.

Weighty matters, but not the stuff of tourist stampedes. People thinking of tax or financial havens tend to picture Monaco or Panama, while Wilmington lacks either super yachts or a signature hat.

Still, residents point to places like the booming Riverfront neighborhood, reclaimed from industrial wasteland, as well as new restaurants and galleries downtown to indicate that Wilmington is trying to change. “I wanted to bring some light and energy to Wilmington,” said Nataki Oliver, who opened a small gallery called The Sold Firm to feature Black artists and to offer painting classes for children.

Aside from corporations, two of the three “Cs” that constitute the city’s holy trinity — credit cards and chemicals — have faded somewhat.

Credit card companies rushed in, starting in the 1980s, after Delaware removed all caps on interest rates, as long as the firms based their operations locally. The volume of credit card bills means they have their own ZIP code, but mergers have diminished the number of institutions.

The third C is chemicals. E.I. du Pont de Nemours and Company, usually known as DuPont, began in 1802 by manufacturing gunpowder. DuPont and its fabulously wealthy owners dominated Wilmington for the next 200 years, creating products like nylon, Teflon and Kevlar.

Its 2017 merger with Dow Chemical Company largely ended that reign, even if the family and the company left traces everywhere. There is a duPont hospital, a du Pont high school, a Dupont street and a DuPont country club. The main area attractions include three former du Pont estates. (There are nearly as many spellings as there are du Pont institutions.)

Mr. Biden announced that he would appoint a climate change “czar” in a speech delivered at the Delaware Museum of Natural History. It, too, was founded by a du Pont heir, an expert ornithologist who collected 66,000 birds and two million seashells. The founder does not get mentioned so much because in 1996 he shot dead an Olympic wrestling champion at a training camp that he had established on his estate. When the convicted murderer died in prison in 2010, he left the bulk of his estimated $200 million fortune to a Bulgarian wrestler.

There are other intriguing bits of Wilmington lore. Swedes founded the city in 1683, and they managed to invent the log cabin before the Dutch ran them off after 17 years. Bob Marley worked in a car plant and as a janitor in the Hotel Du Pont in the early 1970s.

Something grander or more famous always seems to overshadow hallmark Wilmington moments, however.

Rodney Square, the heart of downtown Wilmington, was named after a founding father who rode overnight to Philadelphia to cast a deciding vote for the Declaration of Independence. Yet the midnight ride of that founding father, Caesar Rodney, never got the same press as Paul Revere’s journey. (Wilmington also cannot decide when it happened. The plinth for the statue of the galloping Mr. Rodney bears two different dates: July 1-2, 1776, and July 3-4, 1776.)

Mr. Rodney also owned slaves, and during the protests that erupted last summer after the killing of George Floyd in police custody in Minneapolis, city officials whisked the statue off to New Jersey for safekeeping.

There has long been a thorny relationship between Wilmington’s mostly Black, impoverished center and its largely white, wealthy suburbs. Riots that erupted after the 1968 assassination of the Rev. Martin Luther King Jr. devastated the downtown, and the nervous governor at the time set a nationwide record by deploying National Guard troops for nine months.

The scattered pieces of Wilmington’s past have never quite coalesced into a narrative whole, said David Walter, a freelance journalist who grew up here, missing “whatever that glue is.”

City officials make periodic stabs at creating the glue by rolling out new slogans. “A Place to Be Somebody” was around for years, replaced by “Wilmington, in the middle of it all.” The latest is “It’s Time,” but that tends to provoke the question “Time for what?” and the mood is more “It’s Biden.”

He is not exactly new. On the night that Mr. Biden won the presidency, people from Wilmington inundated their Facebook profiles with their Biden selfies.

The inevitable flood tide of gimcrack Biden souvenirs has yet to start in earnest, but there are some. Scented candles named after Mr. Biden and Vice President-elect Kamala Harris cost $22 apiece at a gift shop abutting the Queen theater. Hers smells like lotus blossoms, inspired by her name, whereas his exudes the aroma of one of his favorite beverages: orange Gatorade.

Mr. Biden trails only the du Ponts in getting his moniker slapped on things. The Amtrak station was named for him because he commuted by train to the U.S. Senate from Wilmington starting in 1973. The pool where he worked as a teenager bears his name.

The Biden Welcome Center is the highway rest stop located along the roughly 30 miles that Interstate 95 slices through Delaware, between Pennsylvania and Maryland.

William A. Sullivan, the chairman of the Greater Wilmington Convention and Visitors Bureau, dreams of installing a selfie-friendly Biden statue there to help entice more tourists off the freeway. “Maybe that will come next,” he said.