Abrams, who would be the country’s first black female governor, hopes for a runoff next month. 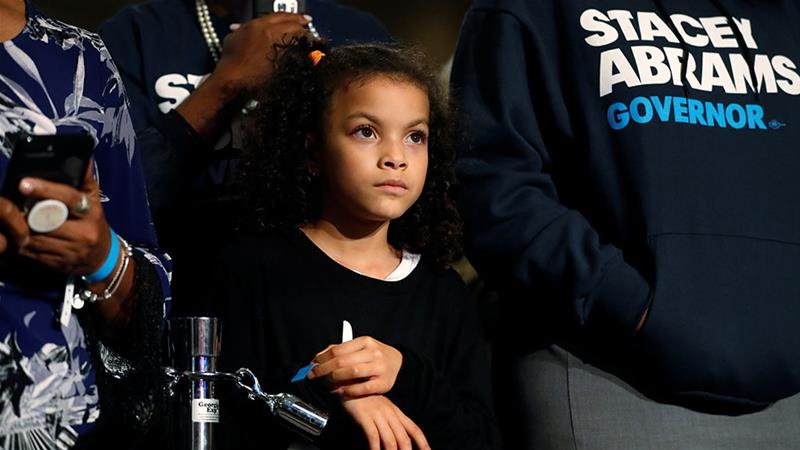 Neck-and-neck until the end, Abrams, a 44-year-old lawyer and novelist, appeared to have lost to her Republican opponent Brian Kemp by a 1.6 percentage margin, according to the Associated Press.

But Abrams, who would be the country’s first female African American governor, insisted that the vote was too close to call and hopes for a runoff race next month.

“I’m here tonight to tell you votes remain to be counted. There’s voices that are waiting to be heard,” she told a crowd on Wednesday morning, as reported by CNN.

Among the most closely watched races in the midterm elections, the two candidates lobbed a series of accusations at each other throughout the campaign.

Kemp, a pro-Trump Republican currently serving as Georgia’s Secretary of State, the body that oversees voting, was accused of voter suppression and abusing his power.

Kemp said he was confident he would win Tuesday’s poll, saying “make no mistake, the math is on our side to win this election”.

His critics, among them Abrams and her supporters, pointed to the 1.5 million voter rolls purged under Kemp’s watch between 2012 and 2016, according to a watchdog, and an Associated Press report that found his office was stalling 53,000 voter applications just weeks before the November 6 vote.

Of that total, most belonged to African American applicants and other people of colour.

On Sunday, Kemp accused Democrats of hacking the voter registration system, a charge he levelled without providing any evidence. As Georgia’s Secretary of State, he said he had opened an investigation.

“I think, unfortunately, Secretary Kemp has not only abused his power, he has failed to do his job,” Abrams said in an interview with ABC on Monday.

“And you don’t deserve a promotion when you do not serve the people you’ve been hired to serve.”

Abrams earned her law degree from Yale University in 1999, going on to work as a tax attorney and then in a few firms.

She started her political career at the age of 29, when she was appointed Atlanta’s Deputy City Attorney.

In 2007, voters elected her to Georgia’s General Assembly as a Democrat, where she eventually became state House minority leader.

She also founded the New Georgia Project, an NGO that worked to register voters of colour and advocated voting rights.

In May 2018, she beat fellow Democrat Stacey Evans in the party’s primary election, becoming the Democrats’ candidate for Georgia’s governor.

As the race intensified and grew tighter, it also turned ugly.

On the Friday before the vote, a racist robo-call went out to many Georgia homes and mocked Abrams. The call included someone impersonating the voice of Oprah Winfrey, who campaigned on Abrams’s behalf.

“This is the magical negro, Oprah Winfrey, asking you to make my fellow negress, Stacey Abrams, the governor of Georgia,” the call said, going on to include several racist slurs and insults.

In a statement, Kemp “unequivocally” decried the group behind the robo-calls, describing “their horrible actions” as “absolutely disgusting”.

In neighbouring Florida, Democrat Andrew Gillum, who was vying to become the state’s first African American governor, conceded to Republican Ron DeSantis, who won in a narrow gubernatorial race.

“We may not have all shown up in the way that we thought and hoped that we would,” Gillum told supporters, “but I still believe in and trust the voters.”

How Hispanics are affected by wall debate

Biden to face long list of foreign challenges, with China being No. 1